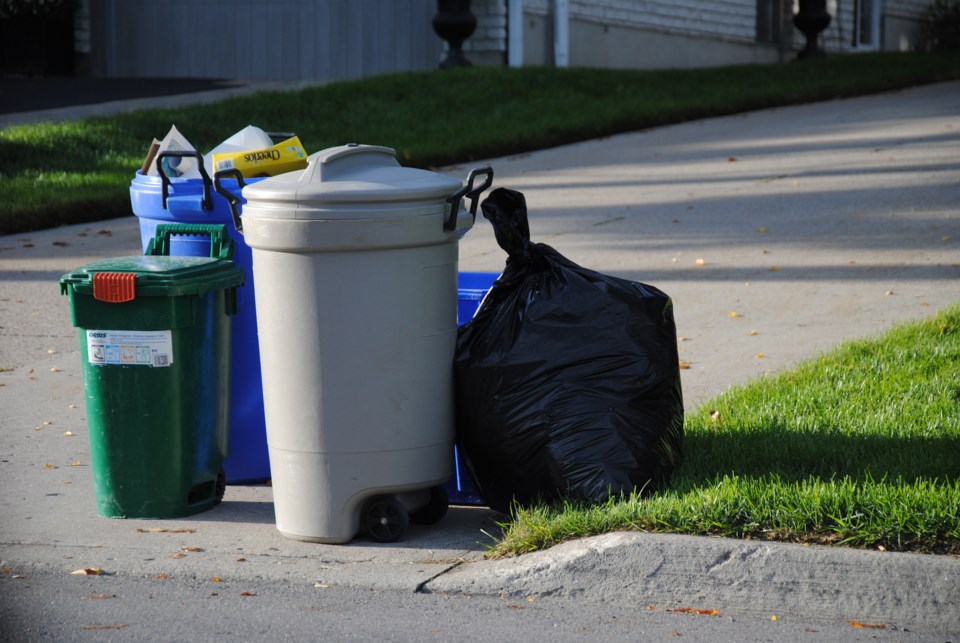 Waste collection delays are creating a domino effect county-wide, and county councillors were tasked with making the difficult decisions this week on how to improve the situation.

On Tuesday, county council voted to cancel curbside electronics collection that was originally slated for two weeks in mid-September, to help alleviate some of the waste, organics and recycling collection problems that have snowballed this summer county-wide, causing the county-contracted Waste Connections to go into default on their contract.

To read our story on this year’s County of Simcoe waste collection delays, their cause and steps the county and Waste Connections have taken to try to alleviate the problem, click here.

“I’m not seeing anything on the horizon to indicate this situation will be over soon,” he said.

The contract for solid waste management through the County of Simcoe is done with Waste Connections, previously called BFI.

Earlier in August, county officials confirmed that a major delays have led to the county hiring an outside contractor, Miller Waste to help pick up the slack for areas that were missed. Miller Waste, the company typically responsible for yard-waste pick up, have been on call to help with any further delays. Terra has also pitched in a truck to help.

The delays are caused mainly by a labour shortage, however the heat and labour laws concerning overtime are also a factor.

“They’re currently 15 drivers short,” McCullough told council. “To put that in perspective, that’s just drivers to get material off the street. It doesn’t include additional staff.”

He added that Waste Connections requires 63 positions to effectively pick up all waste within the County of Simcoe.

“For the past three weeks, they’ve been running with three to seven routes not being manned at all,” he said.

McCullough said that according to county talks with Waste Connections, for every four hires, they’re having six staff leave in the same time period.

“In the last week or so, they’ve had more people apply into the hiring pool, about 10 in the past week, but for every 10 that apply, there’s a lot that drop off between screening and trials,” he said. “It’s not sufficient for short-term collection.”

While Waste Connections had been trying to bridge the gap with overtime and pulling staff from other areas, McCullough said that labour laws state overtime cannot be a requirement, and many workers are starting to put their foot down.

“The majority of staff are putting in their nine hours and then are saying enough is enough,” he said. “That’s had a snowball effect. There comes a breaking point where that can’t happen (anymore).”

“It’s an unsustainable strategy,” he added.

According to McCullough, call volumes to Service Simcoe’s customer service line have doubled this year, attributable to the waste delays.

McCullough said on Aug. 3, the county put Waste Connections into default on the collections contract.

According to McCullough, the outside contractor will not cost the taxpayer anything, as their contract with Waste Connections outlines they are responsible for costs associated with pick-up delays. However on Tuesday, McCullough told council that Waste Connections is trying to cap the costs they will pay out, however said he couldn’t elaborate much further in open session.

“I’d be happy to bring forward a confidential report later because, in general, I would say Waste Connections is looking to limit the impact to themselves,” he said.

“We might have a disagreement on how best to do that through the contract. There is potential for litigation at some future point.”

On Tuesday, most councillors voted to cancel the electronics waste collection to pick up the slack for recycling, organics and garbage.

“I’ll move the motion to cancel the electronics collection. I don’t think we have a choice at this point,” said Ramara Township Mayor Basil Clarke. “We have to get the garbage picked up.”

While curbside collection of electronics will be cancelled for the fall, electronic waste is still accepted at county landfill sites. For detail about where electronics waste is accepted, click here.

'Lake Doctor' says frequent rainfall impacting phosphorus, oxygen levels
Jan 28, 2020 3:30 PM
Comments
We welcome your feedback and encourage you to share your thoughts on this story. We ask that you be respectful of others and their points of view, refrain from personal attacks and stay on topic. To learn about our commenting policies and how we moderate, please read our Community Guidelines.