Heat, labour shortage behind delays in garbage pickup outside Barrie 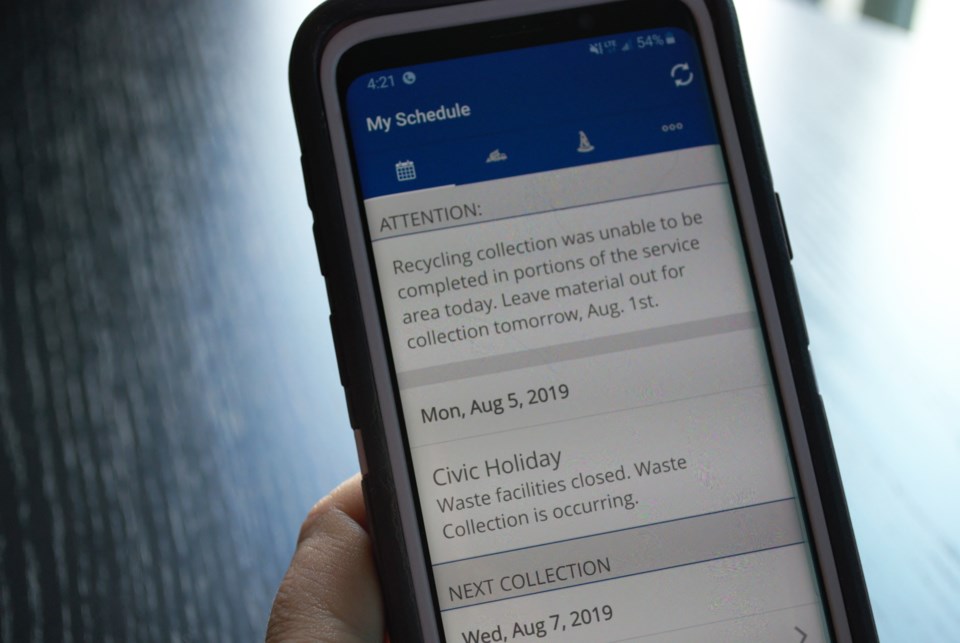 The Simcoe County Collects App sends up-to-date information on waste collection tailored to your specific address. Delays in waste collection have been more common this summer, due to a labour shortage of drivers and the extreme heat. Jessica Owen/BarrieToday

Residents across Simcoe County may have noticed a delay in trash pick up becoming a regular occurrence the past few weeks, but county officials say labour shortages and the heat combine to create the smelly situation, and they're sending in extra help to get the job done.

“There are a number of (factors) that come together here that cause the delays,” said McCullough. “It has been a struggle in previous summers as well. This isn’t unique, even just in the County of Simcoe.”

The contract for solid waste management through the County of Simcoe is done with Waste Connections, previously called BFI. On Friday, county officials confirmed that a major delay from Thursday that saw 40 per cent of recycling left behind has led to the county hiring an outside contractor, Miller Waste to help pick up the slack on Saturday for areas that were missed. Miller Waste, the company typically responsible for yard-waste pick up, will be on call to help with any further delays that may occur throughout the summer.

"Over the past few days, things have really started to snowball," said McCullough. "They've run out of time because licensed drivers have requirements about the maximum hours they can do in a week, or in a day. Realistically, these guys are really burnt out."

According to the McCullough, the outside contractor will not cost the taxpayer anything, as their contract with Waste Connections outlines they are responsible for costs associated with pick-up delays. Anyone missed by the Saturday trucks are being encouraged to double up the following week.

“We have more than enough trucks ready to do the work. What we’re finding more is the difficulty in finding staff through the waste contract,” he said.

While the county did have difficulty with collections in the summer months during a labour shortage in 2017, the county worked with the contractor to resolve the issue at that time, and are doing so again.

“It’s an ongoing issue we’re going to have to continue to contend with,” he added.

Another factor that impacts waste collection is weather. While McCullough said Waste Connections is near the top when it comes to pay and benefits in their sector, the hard and heavy work can deter applicants.

“The contracted staff suffer the effects of heat stress and have had to be pulled off the route,” said McCullough. “They’re throwing up to 10 tonnes of garbage on a truck in a day in this heat. It is cool in the cab but I’ve you’ve seen them work, they don’t spend much time in the cab. They’re out there working very hard.”

Dave Richardson, district manager with Waste Connections of Canada confirms the labour shortage and the extreme heat as being the main contributing factors to collection delays in Simcoe County. A daily route for a driver can see them collect waste from between 800 to 1,100 homes.

“The biggest thing is being short drivers. You have to have the drivers in the trucks to be able to service the routes,” said Richardson. “If you don’t have that, it puts a lot of stress on the other drivers. It’s not even just in our businesses, it’s other haulers in the area too. They’re going through the same thing. It’s the industry as a whole.”

Waste Connections has started a G-to-DZ program which helps drivers will G licences obtain the DZ licence required to drive the vehicles to try to help with the shortage.

“We’ll bring people on as apprentices that work with the drivers and we’ll help them get their DZ licence and graduate them up,” said Richardson.

The County of Simcoe is also looking at more ways they can help to solve the problem.

“One of the things we’re going to consider as we go forward is cart-based collection. That’s an option we’re looking at with our new tender that’s going out in the fall,” said McCullough. “It’s takes the heavy lifting out of it. It could really open up the drivers pool.”

The significant cost to introducing a cart-based system is something county councillors will have to consider in the spring once the tenders come back.

For regular updates on delays in trash and recycling pick up, click here.