Community response overwhelms mom of girl whose car was stolen 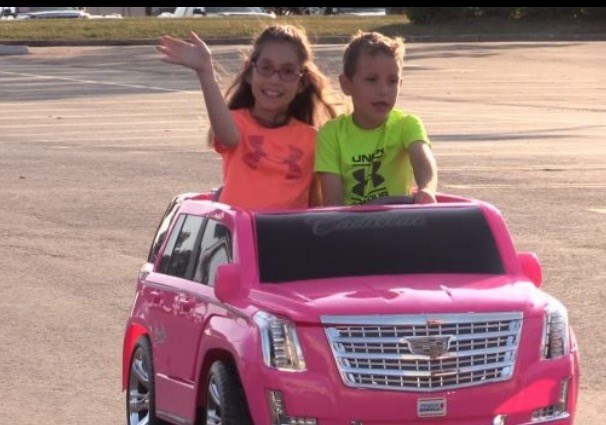 Hillary Fogarty-Gray and her brother Dylan enjoy riding in the car Toys R Us provided for her, after thieves stole her car on the weekend.

On Monday morning, all Denise Fogarty wanted was for thieves to return her 10-year-old daughter’s car.

Days later, she wants the community to know how grateful she is for the overwhelming offers of aid – including a replacement car her daughter just loves – and that she’d like the community to rally together to help catch the thieves that stole her daughter’s mode of transportation.

Toys R Us was quick to respond with a new, pink car for Hillary Fogarty-Gray, a girl with Cerebral Palsy who relied on her black, motorized, ride-in car, as an alternative to her wheelchair.

Under the cover of darkness about 11:30 p.m. Saturday, a 5’8” man with medium build and a boy about age 5, stopped by the Fogarty-Gray home and stole her black car.

“It’s been amazing. I made a post on Facebook and it’s gotten to the point where everyone knows who Hillary is,” said Fogarty.

While riding her new pink car that was delivered Tuesday night, a passing driver showed some support for her, first by honking.

“They were waving at her.This is so incredible,” said Fogarty. “She’s so happy now.”

Hillary’s story struck a chord with Best Buy’s musical instrument supervisor Matt Dunn, who connected with the family to find out how else he and his colleagues could help, even after Toys R Us had replaced the car.

“She needs to know that the community is here for her and that not all people are bad,” said Dunn.

Best Buy is also looking at helping Hillary, who is starting Grade 6 in September, obtain a tablet. It’s a gift that would make an incredible difference, as she’s into electronics and struggles with fine-motor skills and subjects such as printing.

Fogarty said the calls from companies who care keep coming, and so far they include not just Toys R Us and Best Buy, but also the Lake Country Adventure Company, Innisfil Garage Doors, Simcoe County Trucks and R.A.M. Contracting.

Anyone with information can get involved by helping police catch the teen or adult who used a child around age 5 to assist in stealing the toy vehicle.

“How could a parent do that?” said Fogarty.

Council passes motion connected to workplace harassment investigation
Nov 30, 2020 6:19 PM
Comments
We welcome your feedback and encourage you to share your thoughts. We ask that you be respectful of others and their points of view, refrain from personal attacks and stay on topic. To learn about our commenting policies and how we moderate, please read our Community Guidelines.