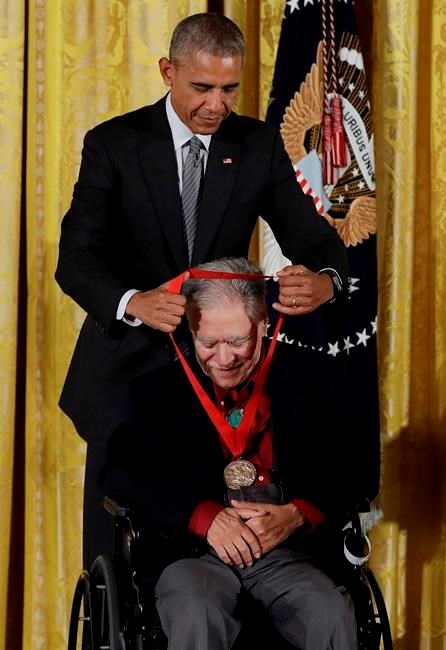 RIO RANCHO, N.M. — Rudolfo Anaya, a writer who helped launch the 1970s Chicano Literature Movement with his novel “Bless Me, Ultima,” a book celebrated by Latinos, has died at 82.

Literary critics say Anaya’s World War II-era novel about a young Mexican-American boy’s relationship with an older curandera, or healer, influenced a generation of Latino writers because of its imagery and cultural references that were rare at the time of its 1972 publication.

In a 2013 interview on C-SPAN, Anaya said the idea of the novel came after he had a vision of a woman at the doorway of a room where he was writing.

The book’s release coincided with the growing and militant Chicano movement that stressed cultural pride over assimilation. It also came as Mexican-American college students were demanding more literature by Latino authors.

From activists circles to community , the novel was shared along with Tomas Rivera’s novel “... and the Earth Did Not Devour Him” and later the poetry of Lorna Dee Cervantes.

“I was completely transported the first time I picked up ‘Bless Me, Ultima’,” said novelist and poet Rigoberto Gonzalez, who was mentored by Anaya. “He was somehow able to capture the backdrop of our community and make us proud.”

Anaya would go on to write a number of novels, including a mystery series featuring Mexican-American detective Sonny Baca.

Anaya used his fame to start a creative writing program at the University of New Mexico and opened up a retreat in Jemez Spring, New Mexico, for aspiring Latino writers.

Despite the popularity of “Bless Me, Ultima” on college campuses throughout the years, the novel was banned in some Arizona schools after a campaign by some conservatives who said the book promoted the overthrow of the federal government. Latino literary critics called those claims outrageous and launched a counter campaign to get Anaya’s work and others by Latino authors into Arizona for community libraries near schools where the book was banned.

Anaya hosted a group of book smugglers led by Houston, Texas, novelist Tony Diaz at his Albuquerque home in 2012. He donated some of his own books and gave activists on a bus his blessing.

The novel was made into a feature film in 2013. The National Hispanic Cultural Center in Albuquerque announced in 2016 it was working to make “Bless Me, Ultima” into an opera.

Born in the small central New Mexico railroad town of Pastura, Anaya came from a Hispanic family with deep roots in a region once colonized by Spain. He was one of seven siblings and the only male in his family to attend primary school. Years later he would say Spanish-speaking oral storytellers of his youth remained an influence in his writing as an adult.

Anaya graduated from Albuquerque High School and later abandoned his studies to become an accountant after enrolling in a liberal arts program at the University of New Mexico. While working on a master’s degree, he met and married Patricia Lawless, a guidance from Lyons, Indiana.

“I already had a couple of drafts of ‘Bless Me, Ultima’,” Anaya said in an interview with the Albuquerque Journal in 2010. “And again she just saw that there was something of literary importance there and encouraged me to keep going, to keep writing.”

In September 2016, Anaya was awarded the National Humanities Medal by President Barack Obama. Frail and in poor health, Anaya agreed to make the trip to Washington at the last moment and accepted his medal while in a wheelchair.

New Mexico Gov. Michelle Lujan Grisham called Anaya one of the state's greatest artists and a seminal figure in literature.

Associated Press writer Russell Contreras is a member of the AP’s Race and Ethnicity team. Follow Contreras on Twitter at http://twitter.com/russcontreras