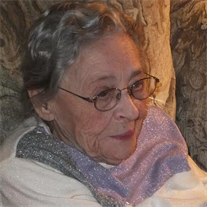 Florence Tranter, our beloved and beautiful mother and grandmother passed away gracefully of natural causes at the Royal Victoria Hospital in Barrie this past Sunday. It was her 98th year. Her two sons, Kenneth and Raymond, would like everyone who was acquainted with Flo to know that hers was a life well lived and that while they mourn her passing, they also celebrate her life and the impact that she had on all who knew her. In knowing that she would shortly be leaving us, Florence drew particular happiness in the legacy of her grandchildren, great grandchildren, and great-great grandchildren.

Florence’s story began in Toronto where she was born just before the end of the First World War. She grew up in the challenges of the Great Depression, during which she helped raise her four younger brothers while working at her father’s grocery store on Victoria Park Avenue. As a teenager (when she had time) she loved to go dancing at the Palace Pier and enjoyed watching movies at the Prince of Wales theatre.

A single mother of two young boys, Florence joined the F.W. Woolworth Company after the Second World War as a sales lady where she played a role in training future managers and executives of the company, including her son, Kenneth. She would remain with Woolworth’s for over thirty years.

Many of these early experiences shaped our mother and grandmother’s outlook on life, including the work ethic that she passed on to her sons, the discipline of saving that resulted in the security and opportunity that she was able to provide for her family, and the independence of a modern woman who had arrived a little before her time.

After the war, Flo re-connected with an old school friend, Walter Tranter, who later became her husband of fifty three years and father to her sons. In the early 1970s, Flo and Wally retired to Pigeon Lake where they enjoyed gardening and fishing, and then later to Midhurst where they made many long-time friends. They were seldom apart and during their retirement shared a love for their poodles, Michie and Nancy. Wally indulged Flo’s passion for Royal Doulton figurines, of which she collected over one hundred. After his passing in 2007, Flo always kept a picture of Wally close by.

Flo was an immensely talented woman and showed her love to her family and friends with the gifts that she often made for them, including her own afghan blankets, floral arrangements, as well as her legendary sausage rolls and mincemeat tarts. As she grew older, our mother and grandmother was a constant resource of wisdom, wise-cracks, and family stories. Alert, intelligent, and funny even into her late nineties, Flo believed in an afterlife in the hearts and minds of good friends and family.

Florence Tranter is survived by her sons Kenneth and Raymond, their wives Saundra and Susan, her grandchildren Kimberley, Lesley, Meredith, Darren, Ryan, Wesley, and Dayle, her great grandchildren Tyler, Jordan, Brittney, Brooke, Tristan, Ryder, and Case, and her great-great grandchildren Charlotte and Juniper. Special mention to our mother and grandmother’s confidant and friend Marguerite and her care-giver and friend Trudi who were both a source of laughter and love.
Friends and family may visit at the Steckley-Gooderham funeral home located at 30 Worsley St. in Barrie Wed. March 2nd (2-4pm and 7-9pm). A celebration of Florence’s life will be held the next day on Thurs. March 3rd at 2pm; visitors are welcome to gather at 1pm prior to the service. Remembrances can be made online on the obituary page at www.steckleygooderham.com and also through donations in lieu of flowers to the RVH (Royal Victoria Hospital) Foundation at http://foundation.rvh.on.ca/.