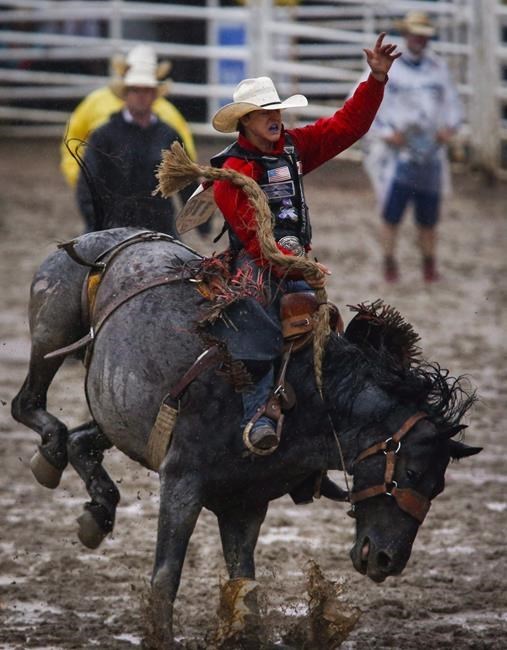 CALGARY — To say rodeo is in Zeke Thurston's blood doesn't quite go far enough. It seems to be drilled into his DNA.

Skeeter Thurston was riding saddle broncs and wife Lynda was filing radio reports at the 1994 Calgary Stampede when they headed to the hospital for Zeke's birth on the rodeo's final weekend.

Almost 23 years later, Zeke is a young man in a hurry to win a lot of belt buckles and money.

The reigning world saddle bronc champion from Big Valley, Alta., is chasing a third straight win at the Calgary Stampede, and yet another $100,000 winner's check.

The annual 10-day rodeo starting Friday is one of the richest, with over $2 million in prize money.

Zeke Thurston would be the first competitor in Stampede history, which dates back to 1912, to three-peat in any of the six rodeo events, according to organizers.

"I really like winning to be honest," Thurston told The Canadian Press. "I don't care to lose, but that's part of it.

"I love getting on the real good bucking horses, the rank horses and making a good ride."

Thurston and his siblings grew up working on the family ranch 70 kilometres east of Red Deer. As the Thurston Gang, they earned money performing as trick riders and ropers at rodeos.

A Canadian steer riding champion at 14, Thurston was all about bull riding until he broke his leg at age 17. Skeeter wasn't the reason Thurston switched to saddle bronc, but his father's expertise came in handy.

"I just happened to choose broncs and luckily have a good coach at home," Thurston said.

"It's kind of like a dance and the horse is leading," Thurston explained. "People think it's you against the horse, but you're kind of working with the horse.

"He makes a move and you make a counter move. You try to help the horse as much as you can.

"It looks real pretty when it goes well."

A pretty ride aboard half a tonne of see-sawing horse takes agility and muscle, according to his father.

"Sometimes you've got to use the strength and the power of an UFC fighter to make it look like a ballet," Skeeter Thurston said.

Zeke Thurston's breakout performances came early in the 2015 season when at age 20 he rode Lunatic From Hell for 89 points to win US$55,000 in Houston.

Thurston capped December's 10-day National Finals Rodeo in Las Vegas with 86 points on Fire Lane to win the world title and season earnings of US$265,000.

He was the second Canadian to claim a world saddle bronc crown in almost four decades and the first since Glen O'Neill of Didsbury, Alta., in 2002.

Skeeter and Lynda are not surprised by their son's rapid success.

"I knew that Zeke had that ability to do well right from the time he started performing as a trick rider, really," Lynda said.

"He could go out there and perform in front of people and there's all kinds of variables, things that could go wrong. He didn't let the things that happen throw him off his game.

"He could deal with whatever was going on out there in the arena at the time. Zeke's always thought anything was possible."

Married in October to Jayne Lauweryssen, Thurston has put some of his rodeo winnings into buying his own cattle. Another winner's cheque in Calgary would be good for a few more.

"It would be awesome to do it three years in a row, but there's a lot of variables," he said. "Hopefully I have a long career ahead of me and hopefully I have a few more Stampede victories."