'We wanted to give the kids an opportunity to come out and play. We know they’ve been missing the sport,' said official from provincial group behind events
Aug 24, 2020 9:30 AM By: Sam Gillett 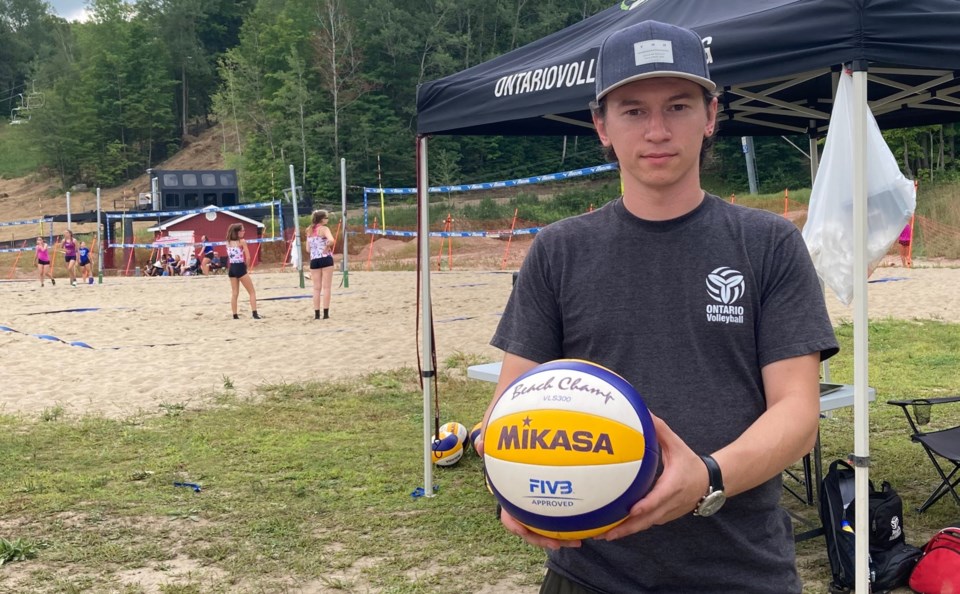 Oklend Llakaj, from the Ontario Volleyball Association, coordinated a volleyball tournament on August 22. The tournaments ran Saturdays and Sundays in August and will continue into September. Sam Gillett/OrilliaMatters

While many sports have been cancelled this year, the Ontario Volleyball Association (OVA) is serving up socially distanced tournaments at Horseshoe Resort for August and September.

On Saturdays and Sundays, players from age 12 to adult have been gathering at three locations across Ontario, playing against athletes of similar ages and skill levels.

From Pickering to London to Barrie, the beach volleyball events were put on to encourage athletes who’ve been off the court for months to get back into the game.

“We wanted to give the kids an opportunity to come out and play,” said OVA organizer Oklend Llakaj. “We know they’ve been missing the sport.”

But even though the sand and upbeat music set the stage for beach volleyball as normal, the game’s been changed for 2020-style safety measures.

Llakaj spoke to players through a microphone before the matches, encouraging a six-foot distance off the court and reminding all that high-fives were strictly off-limits.

Almost all the players are members of the OVA, competitive volleyball athletes who haven’t been on the court since the winter.

While the association has been hosting beach volleyball tournaments for years, this season’s set of games is focused on fun over competition.

“We also knew they hadn’t been training for quite some time,” said Llakaj as the afternoon’s first games began beside Horseshoe Resort’s hillside lake.

Darren Brazier, who sat court-side while his daughter played a match, says the weekend games have been “fantastic.”

“It’s a chance for her to hang out with her friends,” said Brazier. “Whatever indoor season there is this year, it’s good practice for that. She’s enjoying it."

Now, with full rosters of players every week, the OVA is extending the tournaments to September. Three more weekends of matches will be played.

“We wanted to give them as long as an opportunity to come out and play, but we wanted to make sure our events were going well before we released the September dates," said Llakaj.

“Seeing that the majority of our events were selling out, we saw their was a demand for it as well.”