This week, Vin shares what he learned during a recent tasting of Rieslings from all over the world
0
Jul 29, 2017 1:00 PM By: Vin Greco 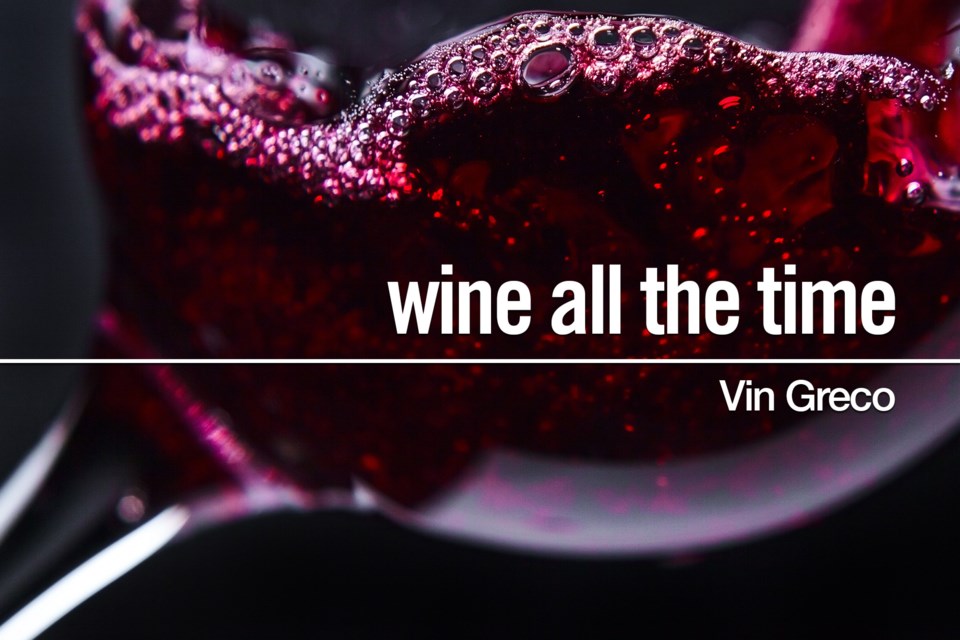 One might be tempted to raise an eye-brow at Traverse City, Michigan dubbing itself “City of Riesling”, but if you had been there on July 23 and 24, when, in a space of 24 hours, they provided a showcase for Rieslings from all over the world, you could only applaud and agree.

Traverse City is located at the northeastern tip of Lake Michigan, just where the Lake begins to turn into the Straits of Mackinac.  It is about 5 hours from Sarnia, or 4 hours from Sault Ste. Marie.  Two long peninsulas jut out into the lake forming the Grand Traverse Bay between them. On these two arms are located over 50 wineries.  Today, wineries are beginning to be established to the east as well, below the coast stretching towards the neighbouring town of Charlevoix.

Five tasting seminars, a tasting luncheon, and a showcase “Night of a Hundred Rieslings” set the stage for a dazzling array of Riesling wines from the ordinary to the extraordinary with even the “unusual” thrown in.

The seminars were well-populated with winemakers, particularly from northern Michigan and the Finger Lakes region of New York., and there was a lot of discussion about winemaking techniques and the thinking behind it.

In listening, one definitely developed an appreciation for the commitment of the winemakers to learning and to honing their craft.  Willingness to share and collaborate was the norm, and one never had the sense that out-shining their neighbours was important at all.

As much as one could learn in the seminars, I am sure that the winemakers also spent hours comparing notes with their colleagues; in a sense, it was as much - if not more - a convention for winemakers as it was a “show” for the general public.  That said, anyone interest in appreciating wine more deeply would have found the experience well worthwhile.

Here are some of the things I learned as I sat, listened, and tasted.

While there were only two winemakers from Germany in attendance, Joachim Heger from Weingut Dr. Heger in Baden and Franzi Schmitt from Koehler-Ruprecht in the Pfalz, almost 3 dozen German Rieslings were available to taste.

Germany is synonymous with Riesling. In Baden, across the Rhine from Alsace, more than 45% of the vines are planted to Riesling.  Further up the river, the Pfalz is planted to just over 20% Riesling, but that represents over 10,000 acres. That is far more than you will find in the rest of the world combined, outside Germany.

In contrast, in California, the cost of land makes planting Riesling prohibitive, as that grape does not command a high enough price per ton to encourage its cultivation.  You will find very little of it in areas like Sonoma or the Napa Valley, though Trefethen, just outside of the town of Napa at the bottom end of the valley still produces some.

In one seminar, someone asked why we don’t see any Riesling blends.  Well, in fact we do, especially here in Ontario.  Sometimes this is acknowledged on the label, as with 13th Street Burger Blend Riesling Pinot Grigio, $14.95. The panelists, however, said that in California, a wine, though labeled Chardonnay, could have up to 25% of another grape blended in, without it being acknowledged.

Riesling, they chuckled, is often referred to as “Vitamin R”, as winemakers will use it to resuscitate a flabby chardonnay that is low in acid.

Throughout the seminars, the speakers would always refer to a wine’s TA, or total acidity, along with its PH, the measure of acid/base in a liquid. The LCBO usually identifies the grams of sugar per litre to indicate a wine’s sweetness, but usually doesn’t refer to its acidity as specifically.

With Riesling, this is a very essential component, one to which winemakers pay close attention. For example, in a tasting of Finger Lakes Rieslings, medium-sweet wines which had 4 times the sugar on average as the dry versions, were also higher in total acidity. As a result, instead of being cloying, the wines ended up being quite refreshing as the acidity kicked in on the finish.

The Finger Lakes area consists of long, narrow and deep inland lakes just below the eastern end of Lake Ontario, and south of and between Rochester and Syracuse, New York.

One of the biggest is Seneca Lake, 38 miles long, 3 miles wide and 650 feet deep.  The depth results in kind of a heat sink, which provides some relief from the cold during the winter, a benefit to the vines.

We rarely see wines from this area here in Ontario, though from time to time they have been highlighted in an “Uncork New York” promotion.  Currently, there are no New York examples among the 280 Rieslings listed in the LCBO.  Along with the premium we pay because of the difference in the dollar, wines from New York and from Michigan tend to rest at slightly higher price points because of higher cost of production and lower output. From my experience, however, the quality is there, most definitely.

Only two Ontario Rieslings were available at the City of Riesling event, and the organizers are hoping to see a far stronger representation in the future. The Cave Spring Cellars CSV Riesling 2015, $29.95, remains available in Barrie and Guelph, as well as through the winery. Charles Baker, who spent several years at Cave Springs prior to moving to Stratus Winery, describes it as the benchmark in Canada for Riesling.  It was first released in 1999, and the fruit is from vines which originated in the Mosel. It is dry, layered and focused and will age forever. One of the winemakers on a panel remarked on its great tension.

The Charles Baker Picone Vineyard 2013 grows in a little bowl of a vineyard at the top of the escarpment overlooking the Beamsville Bench.  It is great stuff, with good fruit and beautiful balance. The vines are deep-rooted in limestone and shale, and the wine is made from the juice just from the crush – no pressing. The fermentation is spontaneous on natural yeast, and it spends the winter on its lees.  Charles claims that it is infanticide to drink it young!  It is available in Guelph, Barrie, and the Soo for $35.

Speaking of aging on the lees, this is a practice whereby the wine is left to age on its sediment for a period of time, and in the process it develops character and additional structure.  As it ages it can become even more elegant.  Franzi Schmitt of Koehler-Ruprecht explained that in making their Saumagen Spätlese Trocken the wine is left for at least 8 months (some age this way for up to two years) with no stirring.  The result is a wine that is quite fruity at first, but then comes across as dry and rich.

Stylistically, Rieslings can be all over the map, from very dry to very sweet, from very simple to extremely complex.  They are grown all of the world, but I would say that Germany and the northeastern part of North America – Ontario, Finger Lakes, and northern Michigan produce some of the best.

A big thank-you and congratulations to the organizers, especially Sean O’Keefe of Mari Vineyards and Amanda Danielson of Trattoria Stella.  The fourth edition is being planned for June, 2018.  If Riesling is yourgrape, plan on taking it in.

Some good Rieslings available here in Ontario include the regular list’s Wayne Gretzky N0.99 Riesling VQA, $14.95, which took silver at the recent National Wine Awards of Canada.  David Lawrason says it is almost off-dry, with dried apple and lemon fruit. It also carries classic sensations of spice, petrol and minerality.

Hidden Bench Estate Riesling 2015, $23.95, is also a silver medal winner found in the Vintages section of the LCBO.  The word is that it is taut and richly flavoured. While it has over 12 grams of residual sugar, it also carries almost 10 grams of total acidity per litre, giving it great intensity.

An old standby on the general list is the Moselland Bernkasteler Kurfustlay 2015, $10.95, which is definitely medium sweet – 28 grams of sugar – but is still refreshing with notes of pear and apple leading to a crisp finish.  “Kurfurstlay” is the “grosslage” or general vineyard area for the town of Bernkastel on the banks of the Mosel River, and an indication of quality.

A good German example in Vintages is the Schloss Schönborn Estate Riesling 2011, $16.95, with a little bit of age allowing the character to develop.  David Lawrason gives it a 90, and says it is classic with “lemon, peach and honey” accompanying “mouth-watering acidity”.

Kim Crawford Sauvignon Blanc, $17.95, ($2 0ff) is a popular example for New Zealand in Vintages.  It has the classic gooseberry flavour people crave and is balanced and satisfying.

Vinum Africa Chenin Blanc 2015, $14.95 ($1 off) is a product of un-irrigated bush vines in the Stellenbosch region of South Africa. The Globe and Mail describes it as “rounded, with notes of apricot and honey and whisper of vanilla and spice set against a firm acid backbone.”

Torres Sangre De Toro Garnacha, Catalunya, $10.95, ($2 off) A Spanish red with a touch of oak, this wine has a soft texture and sweet red fruit on the nose and palate.

Two Hands Gnarly Dudes Shiraz 2015, $21.95, ($3 0ff). is an Australian red made from old vine shiraz,   which the Robert Parker site scores 90  -“an expressive nose of blackberry preserves, kirsch and wild blueberries with underlying anise and cloves hints. Medium to full-bodied it bursts with black and blue berry flavors, finishing long and spicy."

Domaine Lafage Cadireta Blanc 2015, $16.95, is a delicious and interesting white, as it is a Chardonnay (5% Viognier) that was aged on Sauvignon Blanc lees. robertparker.com calls it classy and fresh with spicy stone fruit. -89.

Zenato Pinot Grigio 2016, $16.95 gives us a Venetian example of this popular grape.  The winery refers to key lime and white-fleshed peach accents, and Vintages describes it as balanced and elegant.

Robert Mondavi Fumé Blanc Reserve 2015, $22.95, from the famous To Kalon Vineyard in Napa, is produced largely from dry-farmed vines and demonstrates wonderful balance and intensity. The immediate sensation is of grapefruit, both on the nose and on the tongue, but the texture is creamy and there is a light sense of smoke as a result of barrel fermentation. This is a sophisticated Sauvignon Blanc with depth and great length of flavour.

Vinos De Arganza Lagar De Robla Premium 2012, $12.95, is a bargain from Castilla y León in Spain. It received a 91 from the Wine Spectator for having “depth and integration, with mulled plum, licorice, mineral and smoke flavors.”

Los Haroldos Blend 2014 $14.95, is a Bordeaux blend from Argentina’s Tupungato region in which Malbec takes the lead. With a 96 from the Decanter World Wine Awards, it is said to have “complexity and class” and a “full-bodied palate with a pure fruit expression and fine tannins.”

Chateau Mayne Guyon 2015, $17.95, received a 92 from the Decanter World Wine Awards for its “great depth of red and black fruit, juicy dry, and firm good length and texture.”

Town of Innisfil bestowed award won by just one other Canadian municipality
Feb 27, 2020 11:30 AM
Comments
We welcome your feedback and encourage you to share your thoughts on this story. We ask that you be respectful of others and their points of view, refrain from personal attacks and stay on topic. To learn about our commenting policies and how we moderate, please read our Community Guidelines.