Want to star in a parody of 'cheesy' Hallmark Christmas movie?

Open auditions for Cup of Cheer happening Sunday at Leacock Museum; Director says 'everyone who is cast will be fed and treated like a movie star'
0
Jan 17, 2020 6:00 PM By: Nathan Taylor 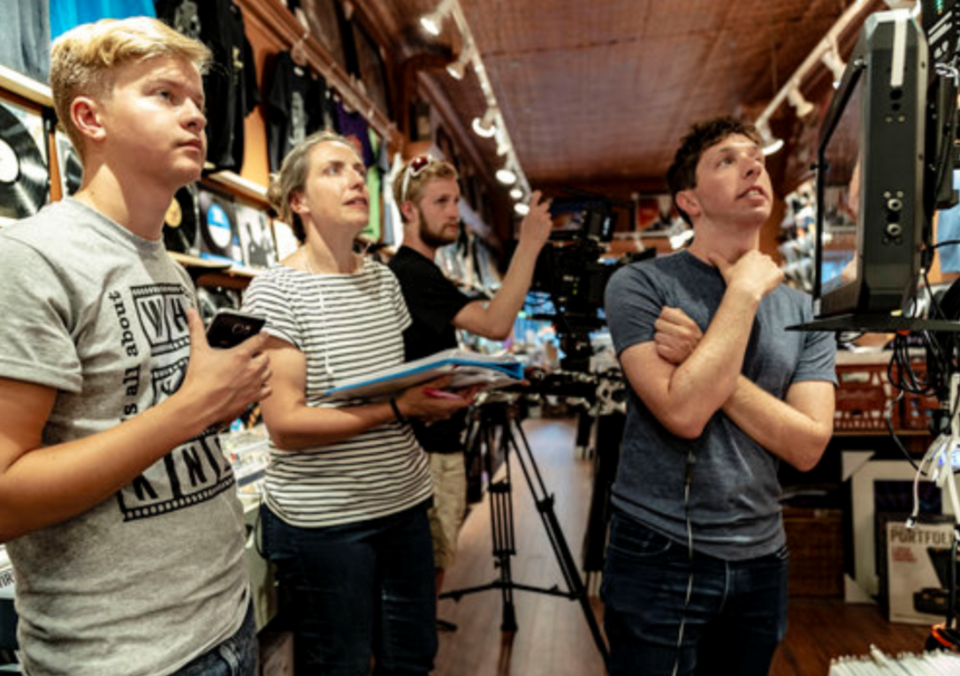 Andy Lewis, left, and Jake Horowitz, right, are shown on the set of Who You Know, a movie that was shot in Orillia. The two have teamed up to write Cup of Cheer, which will be filmed in Orillia in February. Supplied photo

Have you ever wanted to star in a movie? Here’s your chance.

Jake Horowitz, the director of Who You Know, a comedy film that was shot in the area and screened at the Orillia Opera House in December, is ready to put the spotlight on the Sunshine City again in February, and he wants as many locals as possible to be in the movie.

“With Who You Know, we weren’t able to cast locals because of union rules,” Horowitz said. “We always wanted, on the next one, to make it more local and fill it with people who are local.”

Open auditions will be held this Sunday at the Leacock Museum for Cup of Cheer, a film written by Horowitz and Andy Lewis.

“It is a parody of all those cheesy Hallmark Christmas movies,” Horowitz explained. “Like everybody, we can’t help but watch them, as cheesy as they are.”

Cup of Cheer, he said, will be “just a crazy, funny comedy in the style of Airplane! or The Naked Gun.”

“Those are our favourite kinds of movies and we thought we’d like to make something like that.”

Other than the opening scene, the film will be shot entirely in this area.

Local residents are encouraged to audition, regardless of their level of experience.

“They might just have the look for a part or they might be really funny. There are also many little roles sprinkled throughout,” Horowitz said. “We want them to see how talented they are.”

Plenty of extras will be needed, too.

For those worrying about putting their acting chops to the test, he had some reassuring words: “It’s meant to be a totally ridiculous comedy. This is not Shakespeare and it’s not something where you have to cry on cue.”

Anyone interested in auditioning Sunday can show up at the Leacock Museum at 2 p.m. or email info@orilliafilm.com to be given a time slot and more details.

Those looking for a role as an extra do not need to audition; they can simply email info@orilliafilm.com for more information. Local businesses that want to offer space for filming can also send an email.

There will be financial compensation for the lead roles, and Horowitz said everyone who is cast will be fed and “treated like a movie star.”

The community was welcoming to the cast and crew of Who You Know, which made the decision to shoot Cup of Cheer here an easy one.

“Because our experience with Who You Know was so good, this was designed to be filmed completely in Orillia,” Horowitz said.

For those who missed December’s screening of Who You Know, it will be available starting March 1 on Crave.

Horowitz hopes to screen Cup of Cheer in Orillia around Christmas 2020.

Town of Innisfil bestowed award won by just one other Canadian municipality
Feb 27, 2020 11:30 AM

City facilities open despite wintry wallop
Feb 27, 2020 10:28 AM
Comments
We welcome your feedback and encourage you to share your thoughts on this story. We ask that you be respectful of others and their points of view, refrain from personal attacks and stay on topic. To learn about our commenting policies and how we moderate, please read our Community Guidelines.