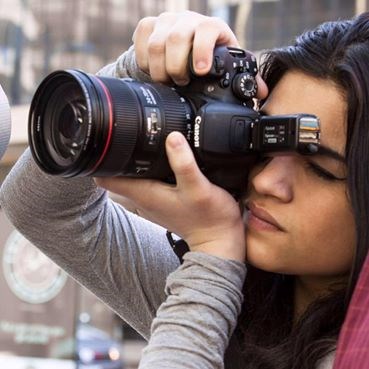 Leah Denbok is pictured in this Facebook photo
Her superpower is making the invisible seen.
For Leah Denbok, the invisible are people living on the street that we walk past every day and often ignore or avert our eyes.
The 17-year-old Collingwood photographer is working on her third book of powerful photos of the homeless.

“Nowhere to Call Home-Photographs and Stories of the Homeless” is the result of three and a half years of travel in Barrie,  Kitchener, Toronto and New York City.  Volume 3 will take the author to Australia.

Denbok and her father, Tim, offer each person $10 for their picture and story.

"What started out as a project has taken over my life" Denbok admits.

Denbok says there are so many misconceptions about people who are experiencing homelessness.

“I have found that most do want their stories to be told and they want to be remembered. It has been my experience in talking to hundreds of individuals that they do want a spotlight shone on their situation.” says Denbok.

"They are grateful that I talk to them because they say people rarely stop and talk to them.”

While each person’s situation is unique, Denbok says she has identified five similarities.

“I have found the number one issue is a lack of affordable housing and communities are just not doing enough. That is followed by mental health issues, addiction, a family tragedy, and in the case of many young people an inability to relate to their family.”

From first hand experience, the teen says she can debunk a common belief about the homeless.

"Of all the hundreds of people I have spoken to, only two said they chose to be on the streets," she said.

The books tell stories through interviews and  pictures.

"My goal, in taking these pictures, is simply to show the inherent beauty of the homeless--the beauty that is inside of them, as human beings--despite outward appearances to the contrary," she explains.

“I tell people to look into the eyes of the people in the photographs and you can see a lot about this person and the situation they’re in.”

The teen was the subject of a mini-documentary on the CBC last summer and has been interviewed by the BBC.

She shared the stage with such dignitaries as the president of the U.N. and Prince Harry at the Air Canada Centre for the WE Day and WE Family events where she spoke to 40,000 people.

Denbok has been invited to attend the ARTWALK NY as the special guest of the organizer David Giffen and she will also participate in the Women of the World Festival 2018 in Australia.

As for what she’d like people to know about the homeless, Denbok says “These individuals are no different than we are. They don’t choose their situation and most are very kind and humble.”

The book will be available at the Treasure House in Barrie.

You can order it on Indigo, Amazon or from the Collingwood Public Library.

County antes up $675,000 for new 'health hub' at Waypoint
Jan 23, 2020 7:30 PM
Comments
We welcome your feedback and encourage you to share your thoughts on this story. We ask that you be respectful of others and their points of view, refrain from personal attacks and stay on topic. To learn about our commenting policies and how we moderate, please read our Community Guidelines.