ONTARIO: Why the OPP issued the Newmarket Amber Alert when there was no abduction

'We were confident every investigative means was exhausted, and there was no doubt in our minds that the lives of the children and the adult were at risk,' says the OPP's Amber Alert manager
0
Jul 11, 2019 6:20 PM By: Kim Champion 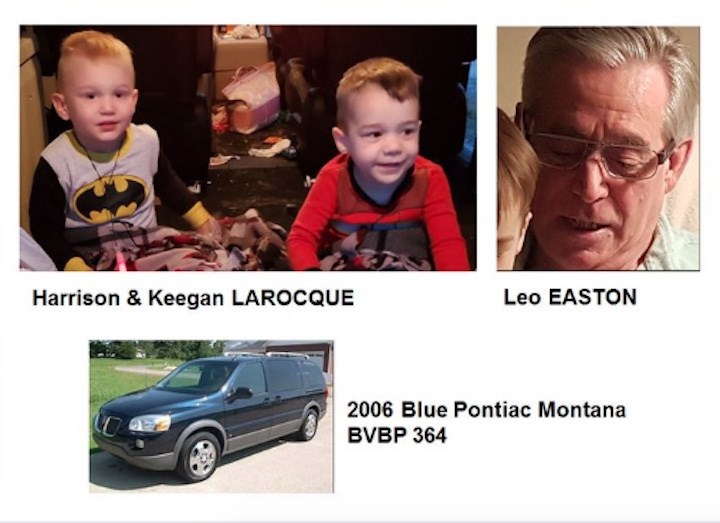 A late-night decision by the Ontario Provincial Police to override the abduction criteria for issuing an Amber Alert is credited with locating a vulnerable grandfather and his two toddler grandsons who went missing from Newmarket about 1:45 p.m. on July 10 while driving around trying to find a parking spot.

About 15 hours later and more than 70 kilometres from where the trio were last seen near Southlake Regional Health Centre, Toronto Police Service officers saw the blue Pontiac Montana van driven by Leo Easton, 70, with brothers Harrison, 2, and Keegan Larocque, 4, aboard, on Lakeshore Boulevard in Toronto and stopped the vehicle.

York Regional Police said Easton dropped his wife off at a nearby plaza near Davis Drive and Lundy's Lane and never returned.

Don’t want to miss any local news? Sign up for our daily headlines email

Toronto police found Easton and the young brothers about 4:30 a.m. July 11 in good health and took them to a nearby fast-food restaurant for a bite to eat, according to media reports. The family was reunited a short time later.

A request from York Regional Police for an Amber Alert to help locate the family was initially denied, as alerts are broadcasted only when a child under 18 years of age is abducted.

However, as “tireless” efforts by York police investigators and frontline officers failed to locate Easton, the OPP made a “human decision under the extreme circumstances,” said Stacey Whaley, who manages the alert program for the provincial force.

“For that length of time for them to be gone, there was no doubt there was a risk, even though it didn’t meet the criteria of abduction,” Whaley said of the decision to issue this morning’s 3 a.m. alert. “We were confident that every investigative means was exhausted, and there was no doubt in our minds that the lives of the children and the adult were at risk and that there was imminent danger, for what reasons we didn’t know because we didn’t know the circumstances. In the end, we decided (to issue the alert) because we’ve done absolutely everything we can and we’re no closer to finding out what happened.”

The children’s mother, Dana Larocque, posted an impassioned plea on her Facebook page shortly after midnight July 11, which informed friends that York police’s request for an Amber Alert had been denied and urged them to call the OPP “to push for an amber alert”.

At least six people wrote to Larocque that they had called the OPP about the case.

Friend Caroline Evans said, “I called and they took my name and number and they said it was being reviewed. They also said they have been getting a lot of calls asking for an Amber Alert. Sending you all of my love Dana xx”.

But while it appears the OPP received calls of concern about the missing family members, it and other police forces also fielded complaints, yet again, from people upset about being woken up in the middle of the night by the Amber Alert.

For this, the OPP makes no apologies.

“The OPP recognizes the inconvenience the alert may have caused, but will not apologize for using all of the tools available to help locate a child,” the July 11 statement said. “The decision to utilize the Ontario Amber Alert is based on established criteria, and is not taken lightly. In 2019, there has been five (alerts) activated. As a direct result of these alerts, four assisted in the safe return of the child/children and one with the apprehension of a suspect.”

The OPP also reminded the public that calling 9-1-1 or any emergency service communication centre is not an appropriate venue to complain about the alerts.

As of April 2018, compatible wireless networks (wireless public alerting) were included in this mandate. The only option to not receive these alerts to a mobile device is to have your device turned off.

However, if your device is turned off, you will be unable to receive any emergency alert that may contain information of imminent danger in your area.

The OPP acts as the gatekeepers of the international program known as the Amber Alert, Whaley said. The criteria for issuing alerts isn’t specific to Ontario, it applies everywhere.

Here are some quick facts on the Amber Alert program in Ontario, courtesy of the Ontario Association of Broadcasters:

The 1996 kidnapping and brutal murder of Amber Hagerman, 9, in Arlington, Texas, prompted the community to think of innovative ways to make their community a safer place for their children.

This is how the Amber Alert system was founded. When there’s a confirmed case of a child abduction, police notify their local broadcasters and supply them with all known information on the child, their abductor and any vehicle involved.

The police now have thousands of sets of eyes trying to assist them in saving the child’s life and apprehending their abductor.

Police believe the first two to five hours of an abduction are the most crucial. So, it’s important to get the information on the missing child out quickly and often. In the U.S., the program has gone nationwide.

The Ontario government-endorsed Amber Alert program is a voluntary cooperative plan between radio/TV stations, the Ministry of Transportation and the Ontario Provincial Police.

The plan calls for the OPP to provide media outlets with critical information concerning a confirmed child abduction, which could assist locating the child. The Ontario Association of Broadcasters is acting as the liaison between radio/TV and the OPP.

How an Amber Alert is activated:

A request to activate an Amber Alert must be made by an Ontario law enforcement officer holding the rank of inspector or above.

The request is sent to OPP headquarters, where a 24-hour duty office is responsible for ensuring the Amber Alert meets the criteria, and contacts the media via their requested method based on time of day.

The duty office is also responsible for cancelling an alert.

Before an alert is initiated, the following three criteria must be met:

K9 unit tracks down teen accused of dangerous driving
Jun 3, 2020 11:45 AM
Comments
We welcome your feedback and encourage you to share your thoughts. We ask that you be respectful of others and their points of view, refrain from personal attacks and stay on topic. To learn about our commenting policies and how we moderate, please read our Community Guidelines.