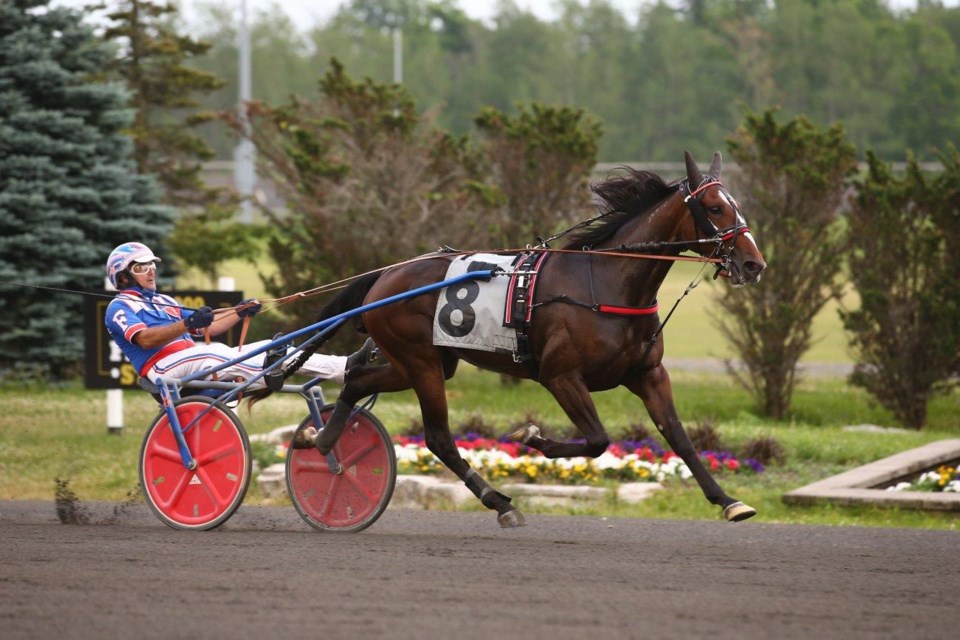 Three-year-old trotting gelding Hayek and driver Louis-Philippe Roy cruised to a seven length win in a recent start at Woodbine Mohawk Park and the pair will be looking to replicate that effort in the $105,600 Ontario Sires Stakes Gold Series opener at Georgian Downs on Sunday, June 28. (New Image Media photo)

NEWS RELEASE
ONTARIO SIRES STAKES
*************************
Since racing resumed at the beginning of June, Ben Baillargeon has been on a tear, sending out 20 winners from 54 starters, and the trainer will be looking to add to that tally when the Ontario Sires Stakes Gold Series season gets underway this Sunday, June 28 at Georgian Downs.

Baillargeon goes into the event with the early favourites in both Gold Series divisions after his three-year-old trotting geldings Hayek and HP Royal Theo delivered a pair of impressive victories at Woodbine Mohawk Park last weekend.

“They’re similar, they’re both fast, I can tell you that,” said Baillargeon.

“We all knew about HP Royal Theo, we knew that he’s very good, he showed all kinds of ability last year,” said Baillargeon of the Royalty For Life son who captured the 2019 William Wellwood Memorial Trot. “We cut him loose a little bit last week — not that we didn’t cut him loose his first start, he trotted in 1:54.3, last quarter in :27.1, in against older horses — but last week he was ready and I needed to see what we had in the tank. So I said he (Louis-Philippe Roy) might want to let him trot a little. He didn’t really let him trot, this is what’s amazing about it, he didn’t really let him trot and he went in 1:52.3, last quarter in :27.3.

“And the other horse, Hayek, a friend of my dad said, ‘This horse is for sale Ben, you should look into it, this one’s for you’. So I looked into it. I called Marcus Melander and he told me what I wanted to know and that was it, we made the deal,” said Baillargeon, who acquired Hayek on June 8. “And the horse looked awful good his first start. He was a little bit of a handful last week, I think he will settle down with time, but he sure has lots of speed, serious speed.”

Hayek and driver Sylvain Filion will be looking to replicate that June 22 effort — a seven-length gate-to-wire score in 1:53.3 — from Post 3 in the first division on Sunday, facing off against six rivals for the $105,600 purse.

Baillargeon shares ownership of the E L Titan gelding with Teresa Davidson of Milton, Santo Vena of Brampton and Nunzio Vena of Bolton, Ont. and the trainer said Hayek enjoyed a day off after Monday’s victory and will just jog and continue to settle into his new home leading up to his Ontario Sires Stakes debut on Sunday.

“He came to the barn I think 10 days before I raced him last Monday and he was a little bit, not a handful, but he was a little aggressive, let’s put it this way,” said the Guelph resident. “Today (Thursday) he was very nice on the track. I think he’s starting to like his new surroundings.”

HP Royal Theo will make his sophomore Gold Series debut from Post 5 in the second $106,400 division, coming into the season opener off the impressive June 20 effort that saw him cruise home three lengths the best in 1:52.3.

Regular reinsman Louis-Philippe Roy will be in the race bike for owner-breeder Claude Hamel of Ayer’s Cliff and Michel Damphousse of Louiseville, QC. The gelding was a Gold Series winner at two, but he also made breaks in three provincial starts, so Baillargeon is hoping the trotter can kick off a more consistent provincial campaign on Sunday.

“These two horses, they’re sure nice,” said the trainer. “That Hayek horse, he looked very good his first start and well Theo, like I said, we always knew that he was good, but he showed that he’s matured a lot since last year.”

Georgian Downs will send the first race behind the starting gate at 6 pm on Sunday and feature the Gold Series three-year-old trotting colts and geldings in Races 5 and 8. Downloadable programs and a live stream of all the races are available on the Georgian Downs website.

In addition to Sunday’s Gold Series, Georgian Downs will also host two $7,100 divisions of the Prospect Series for three-year-old trotting colts and geldings on Saturday evening. Horses that were sustained to the 2020 Ontario Sires Stakes program are eligible for the Prospect Series, which consists of five legs contested at racetracks across Ontario leading up to a $15,000 final.

Saturday’s divisions will go postward as Races 1 and 7, with a 7:15 pm post time. Downloadable programs and a live stream of all the races are available on the Georgian Downs website.

Georgian College student tests positive for COVID-19
Aug 12, 2020 4:46 PM
Comments
We welcome your feedback and encourage you to share your thoughts. We ask that you be respectful of others and their points of view, refrain from personal attacks and stay on topic. To learn about our commenting policies and how we moderate, please read our Community Guidelines.