An application, spearheaded by the Gilbert Centre, has been submitted to the province for an overdose prevention site
Oct 11, 2018 5:30 PM By: Raymond Bowe 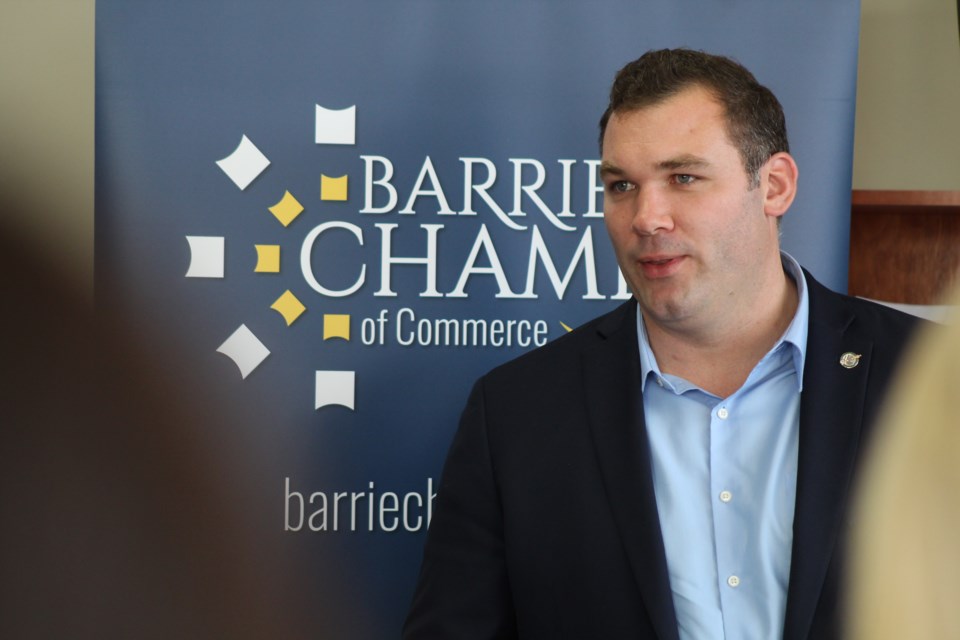 Barrie-Springwater-Oro-Medonte MP Alex Nuttall speaks at an event in Barrie earlier this week. On Thursday, he voiced his opposition to 'illegal-drug injection sites' being set up in the city. Raymond Bowe/BarrieToday

Barrie-Springwater-Oro-Medonte MP Alex Nuttall came out Thursday in strong opposition to what he refers to as an ‘illegal-drug injection site’ in downtown Barrie.

The subject has been a hot topic lately since coming up at all-candidates debates ahead of the upcoming city election, including as recently as Tuesday night.

“As a child growing up in government housing, I saw firsthand the impact of addictive behaviour and mental-health issues,” Nuttall said in a news release. “For me, an illegal-drug injection site is a step toward normalizing illegal and self-destructive behaviours.”

There have been 22 overdose deaths in Simcoe-Muskoka so far this year and statistics show the city is above the provincial average. There was also a 68 per cent increase in the first quarter of 2018.

A Barrie group has been waiting to hear back from the province after applying on April 10 to have an overdose prevention site (OPS) approved for the city.

The local application, which is being spearheaded by the Gilbert Centre, remains on hold while provincial officials review the situation surrounding OPS’s and supervised consumption sites (SCS). An OPS could be as spartan as a trailer in a park, whereas an SCS is more clinical in nature.

The Ontario ministry of health says OPS's provide easy-to-access, life-saving services in a stigma-free environment, to help reduce the growing number of opioid-related overdose deaths. The sites could provide supervised injection, harm-reduction material, including disposal of used supplies, and Naloxone.

Nuttall says he encourages voters “to support a candidate who will not put an illegal-drug injection site in our city’s beautifully revitalized and historic downtown.”

Nuttall, who has served on the Downtown Barrie Business Association (BIA) and has worked downtown in addition eight years on city council and now three years as MP, says he “unequivocally” opposes placing “an illegal-drug injection site into our downtown, which we have invested millions of dollars in revitalizing.

“Placing an illegal-drug injection site beside the condos where people have invested their life savings, or beside the beach and marina where the city is spending millions of dollars, is unreasonable and detrimental to the health and economy of our city, and to our children who play at these downtown parks,” the MP added.

At the Gilbert Centre, which is taking the lead on Barrie’s OPS application alongside organizations such as the Canadian Mental Health Association (CMHA), harm reduction co-ordinator Matt Turner doesn’t believe Nuttall’s stance will have much bearing on the local application.

“It’s a little surprising that he’s making these comments. The decision rests with the federal government for an SCS and with the province for an OPS," Turner told BarrieToday, adding the decision is made by bureaucrats, with guidance of the sitting government, while such a facility would also have to be in accordance with the city's zoning bylaws.

“We’ve applied for a site and are in the midst of a provincial review,” Turner said. “I will say that the site isn’t ‘illegal’, but is approved by the government. At a candidates debate on Tuesday, there was broad support for a sanctioned supervised injection site.”

Nuttall told BarrieToday his stance on injection sites isn’t related directly to the local OPS application, but the broader message such a facility would bring.

“The application obviously precipitated this, that’s what created the debate on the issue,” Nuttall said, adding he wants to see the most effective tools applied to the local drug problem.

“We also have to be prudent in how we approach that,” said Nuttall, adding he wants wide-ranging consultation, such as roundtable discussions, to get feedback from people on where an appropriate place would be for such a facility.

“I want the opportunity to go and talk to my constituents,” he added. “Putting together the minds of 150,000 people in Barrie ahead of a small group of people, we’ll always find a better answer."

Nuttall said now is the time to get the discussion going.

“It’s good to have a fulsome discussions because it allows voters to make an informed decision and it allows people to take into consideration other people’s perspective on the matter,” he said.

Nuttall said he expects backlash to his stance.

“Now, I know that left-wing activists will verbally attack me for taking this position, saying I have no heart, but that could not be further from the truth,” he said, detailing his support for several organizations devoted to youth mental health and a $2,500 donation to the CMHA’s local branch through the Hockey Night in Barrie fundraiser.

The topic will likely be front and centre at an all-candidates debate in Ward 2, which includes downtown, scheduled for Tuesday, Oct. 16 beginning at 7 p.m. at the Five Points Theatre.