Mark Faris is number one 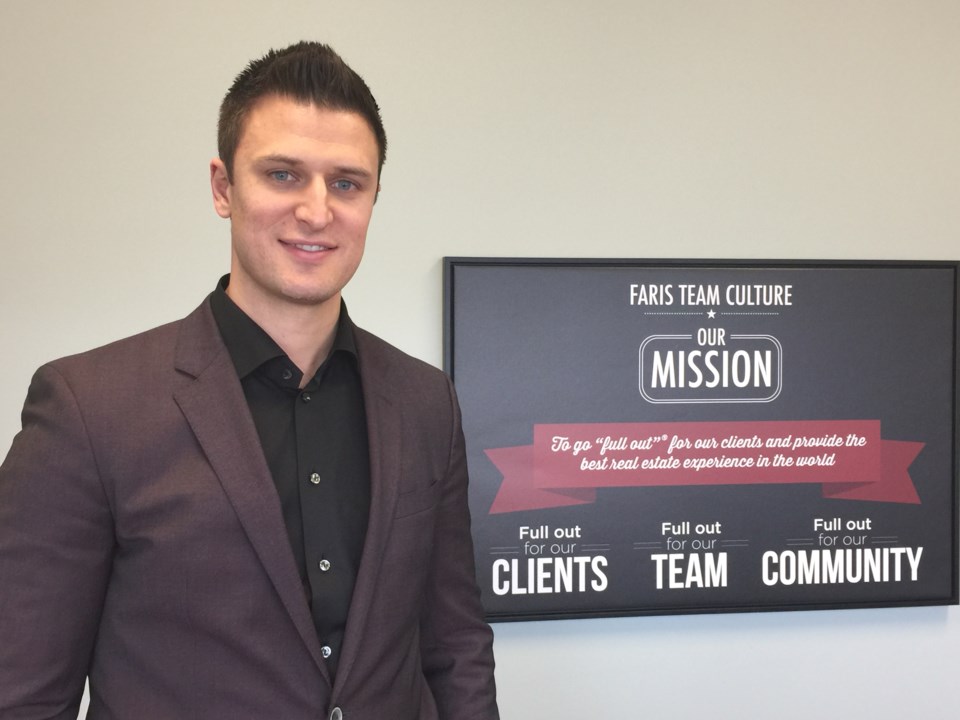 Mark Faris is arguably one of the most recognizable people in Barrie.

His face appears on hundreds of lawn signs every year throughout the city as the "brand" of his real estate firm, The Faris Team.

At 33-years old, Faris is at the top of his profession.

He is CEO and Broker at Royal LePage First Contact Realty The Faris Team Brokerage in Barrie.

The real estate rock star's firm has been named the number one sales team in Canada for Royal Lepage.

"Being number one out of the entire company was something that I didn't think was possible because of our average sale price compared to say, Toronto and Vancouver, where houses are three times as expensive," explains Faris. "So we have to sell three times as many homes in order to compete on that level."

The accolades don't end there.

The Faris Team has been number one in Simcoe County among all brokerages since 2011 and was also named the Top 5 team on the Toronto Real Estate Board in 2015.

It came from humble beginnings, according to the soft-spoken professional.

He and his wife Joanna started the company in 2007 with nothing in the bank but the hopes and dreams of a young couple.

Faris was 23, fresh out of a semi-pro hockey career and inspired by his sister, a real estate agent near Guelph.

"Joanna and I didn't start with this big nest egg," explains Faris.  "We barely made it through the first six months. It was a very very difficult time. Joanna couldn't afford milk, that's how tight it was but there was a strong desire to succeed because I had to. We had to."

Joanna has a professional marketing background so she did all the staging and photography - crucial talents that helped build their business, said Faris.

Hard to believe, but proof of how things have changed so rapidly:  Faris says when they started the company, slick video listings did not yet exist and house tours were depicted in photo slide shows.

"We're seeing it more and more now, the growth, especially within the last 60 days. There's a lot of Toronto buyers coming up this way. Newmarket and Bradford prices now have I guess gone beyond some people's budgets. To get a four-bedroom home here in Barrie you can do it in around the $400,000 mark, which is very affordable for a lot of people, and still have a decent sized yard."

Faris predicts the Barrie real estate market will follow the path of Mississauga and Brampton, also once considered affordable but now with prices that continue to rise.

"I think Barrie is kind of on the cusp of that right now," Faris said. "It's exciting for sellers because now the prices of their homes are selling on average for eight percent more than a year ago. Pricing homes becomes not just looking at the last six months of sales, you have to factor in competition, what's going on and know where the market is today because today is different than 30 days ago. That's how fast it's changing."

The entrepreneur was born on a farm just outside of Cookstown, the oldest boy and second oldest of nine children.

Barrie is home to the Faris' and their three young boys with no plans to leave.

He says the city has the perfect lifestyle for raising a family with water, ski hills and proximity to Toronto.

But there are lots of plans to expand the business beyond Barrie.

The Faris Team is moving into new markets including Midland, Penetanguishene, and Orillia to give more clients what Faris calls their "next level service."

"First and foremost we don't cut corners on anything," said Faris, the salesman in him revealing itself. "Everything we do is the highest quality and professionalism. We have an exclusive stager, exclusive photography company and exclusive videography team and our feature magazines."

The agency has a full marketing department, an administrative team and client care, right down to tracking the number of hits a listing gets online.

A feedback coordinator follows up with agents after showings to find out what they liked what they didn't like about the home and then emails that to the client.

"You really want the firepower of a large team that has more muscle and financial resources to be able to plug in and do the right marketing but clients want that personal touch as well," Faris explained.

"We run it as a professional business where we have a set system. We know it works and we're constantly improving it."

The one thing that won't change is the brand - Mark Faris' face - although the photo that people see everywhere has changed over the years and it's not cheap to reprint hundreds of for-sale signs.

"Kids are like, 'Oh Daddy, there's you,'" Faris laughs.  "All it really is to me now it's a brand. It's our brand. The face is the brand and the name but now we're the Faris team. I don't let it get to my head. I just have to make sure I'm up to date with my photo so when I walk in the door they're not like 'You don't look like your photo.'"

Faris says his team is like family and in fact includes two of his brothers with a third about to join.

Sounds like a good reality TV  show with four telegenic siblings on top of a high-powered real estate firm.

Faris admits they have thought about and even discussed it.

"That might be kind of a cool concept," he said.  "Who knows what the future will bring but right now the focus is on improving the service, looking after our clients and expanding into new markets. I'm very big on doing one thing very well instead of getting pulled in all different directions.That would take a lot of time to do that."

And there is the Faris focus - a precise vision of his company, its culture and its philosophy - "Full Out For You."

But another thing Mark Faris really wants you to know is that his vision goes beyond business to a deep Christian faith he says is the main motivation for him and Joanna.

"It keeps us humble, grounded and on track," Faris said. "We're so thankful for everything we received in our lives. All this can be taken away in the drop of a hat so that's a big part of the business. We have a lot to be thankful for, for sure."

During heat warnings, garbage pick-up will start earlier
Jul 15, 2020 11:51 AM
Comments
We welcome your feedback and encourage you to share your thoughts. We ask that you be respectful of others and their points of view, refrain from personal attacks and stay on topic. To learn about our commenting policies and how we moderate, please read our Community Guidelines.