The Airstreams will be parked along Hurontario Street from today through Sunday at noon
Sep 13, 2018 8:00 PM By: Erika Engel 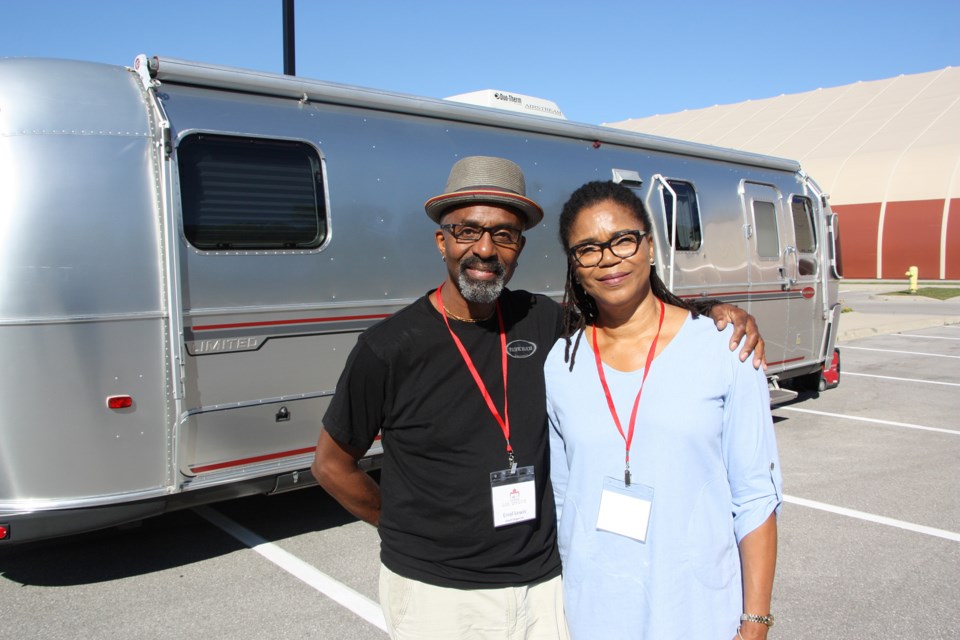 Errol and Wendy Lewis with their 2001 Airstream, named Valentine because they bought it on Valentineâs Day. They have organized this weekendâs Airstream event downtown Collingwood. Erika Engel/CollingwoodToday

If there’s a little more sun glare downtown Collingwood this weekend, it’s because of all the extra polished aluminum lining Hurontario Street.

By end of day there will be approximately 40 Airstream trailers parked on the east and west side of Hurontario Streets from First to Third streets.

Urban Air North Airstreams is the name of the event that has brought campers from across Ontario and even as far as Arizona to Collingwood for three nights, and it’s all because Errol Lewis bought an Airstream a couple years ago.

Errol and Wendy Lewis live in Pickering, they are getting closer to retirement and wanted to invest in an RV so they could become snowbirds.

“We looked at the big brown boxes,” said Errol, but neither he nor his wife could find anything they liked, though there were some fancy options. “We saw an Airstream and we thought, ‘Wow, now that’s class'.”

The couple purchased their Airstream sight unseen from a seller in Green Bay, Wisc. They lucked out; the trailer was in immaculate condition.

They have since taken it to Florida and even Mexico.

“My husband has become an Airstream fanatic,” said Wendy. “We are fanatics now.”

Both love the design (exterior and interior) of the trailer and say it exudes class and luxury.

“You’ll see Airstreams that were made in the 1960s and '70s in great condition,” said Wendy. “They are kind of like a Harley-Davidson. Once you have it, you take care of it and you keep it forever.”

Errol joined all the online groups he could find and started his own Facebook site called Airstream Canada Adventures.

This weekend’s event in Collingwood is the first of its kind in Canada, according to Errol.

Wendy grew up in Collingwood, so she and Errol thought it would be a good place for the Airstream event.

The idea behind the event is “camping for a cause,” according to Errol.

The group will be making a donation to the Collingwood YMCA from the money raised through the event.

Errol runs Toronto Hot Air Balloon Adventures and will be giving the rides. He’s asking for a $20 donation for the rides, which will be added to the donation the group gives to the YMCA after the weekend event.

Errol has also planned two seminars for the Airstream campers to take in while they are visiting Collingwood.

Both the concerts and hot air balloon rides are open to the public. Errol also encourages residents to visit the Airstreams parked downtown, and expects most campers will open their doors to visitors interested in seeing an Airstream.

The campers will be leaving on Sunday at noon.

Errol hopes to make the event annual and see it grow. A similar event already exists in the US and regularly sees 100 Airstream trailers attend. He has been working with the Town of Collingwood for the better part of a year to plan the event and obtain the necessary permissions for camping overnight in the downtown core.