'From my angle, it looked like it went right up Mulcaster Street from the lake heading north,' says east-end resident
Mar 1, 2021 7:03 PM By: Shawn Gibson 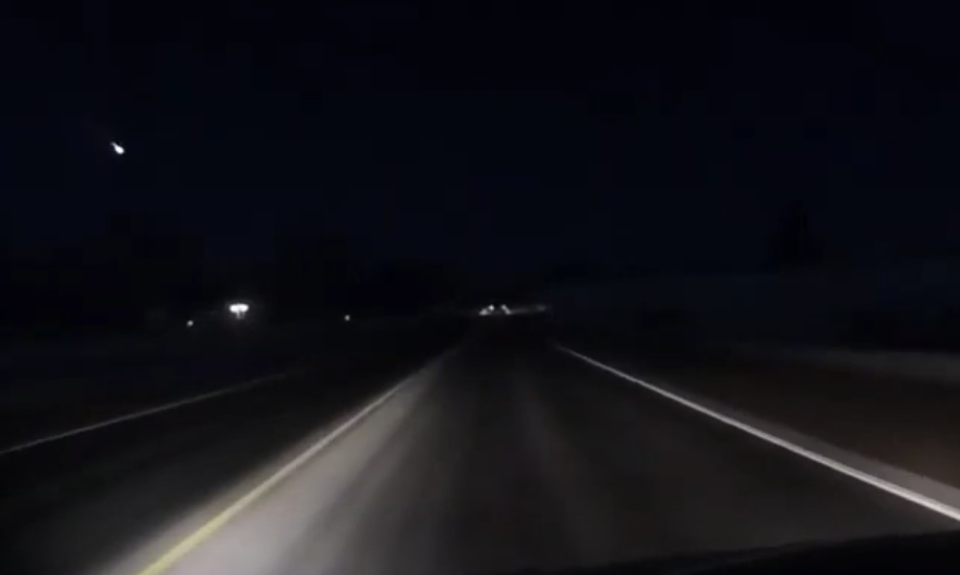 A fireball is seen streaking toward Earth in this image.Screenshot

Reports of a flash of bright light in the night sky made the rounds on Facebook, Friday night.

If you saw it and thought you were going crazy, there is now a video.

Around 10 p.m., Friday, Mike Pachulski says he was travelling to Barrie from Peterborough when his dash-mounted camera picked up the ball of light streaking through the night sky.

“I actually thought it was fireworks at first, because even though you can’t tell from the video, it looked green to me,” Pachulski told BarrieToday.

Pachulski admits he's a bit of an amateur meteor chaser and was excited to know he caught the footage on video.

It all happened so quickly, but it was moving slowly enough for Pachulski to observe it.

“I remember looking at it and thinking it looked like it was fragmented. I thought it was going to explode at one point,” he said. “It was glowing the whole time and I could really see the smoke coming off it.”

Barrie resident Julie Bateman was lying on her couch just after 10 p.m., Friday, watching television when she saw the meteor out the front window.

“I live in the downtown, old east-end section of Barrie and from my angle, it looked like it went right up Mulcaster Street from the lake heading north,” Bateman said. “I wouldn't say it was moving super fast since I saw it for a few seconds.

"It was a large white fireball with a tail," she added.

Bateman said she has only seen two meteors in her life, with the first being six months ago.

On Friday night, though, at first she thought she was letting her imagination get the best of her when she posted what she saw on Facebook. But others started quickly validating what she had seen, as they saw the same thing.

“It was my dad's birthday, so I thought that maybe I had imagined it since it was the first birthday since he passed away from cancer and I tend to have an active imagination,” Bateman said. “But when I posted about it on Facebook, many of my friends tagged me in posts from other people who saw it, too.”