'I would say there is a possibility (the lockdown) will need to be extended beyond June 2,' says Simcoe-Muskoka medical officer of health
May 11, 2021 6:19 PM By: Erika Engel 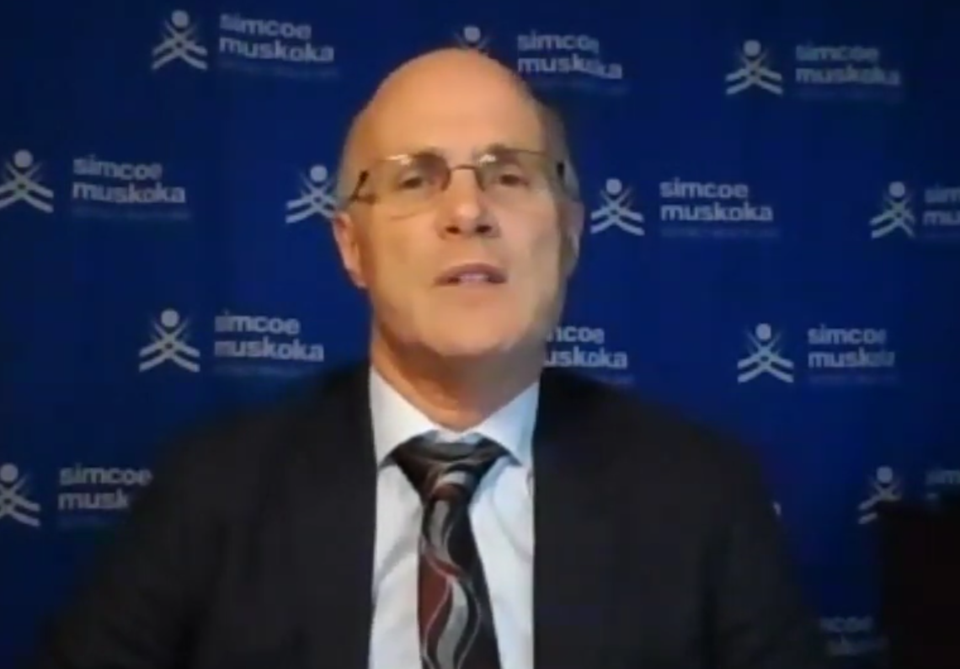 Simcoe-Muskoka medical officer of health Dr. Charles Gardner speaks to members of the media during a conference call on April 20, 2021. Screenshot

Although COVID-19 case rates are down in the region, the local medical officer of health wants to see more success before there's a celebration.

During that time, the province has been under a stay-at-home order and vaccine supplies have been increasing.

The third wave, however, has brought higher-than-ever case counts and hospitalizations and Ontario’s chief medical officer of health, Dr. David Williams, advised the provincial government to extend the stay-at-home restrictions into June. They are currently in place until May 20.

The government already extended the state of emergency to June 2, but the stay-at-home order hasn’t yet been lengthened.

Dr. Charles Gardner, medical officer of health for the Simcoe Muskoka District Health Unit, said an extension of the stay-at-home is expected.

“I certainly agree that it’s the right call,” he said during a media briefing Tuesday. “I was very concerned in February when we opened. … I agree with the chief medical officer of health that (case rates) need to be significantly lower than we were back in February.”

Though the local doctor didn’t commit to a certain benchmark he’d like to see met before the province starts reopening, he noted there were about 1,000 new COVID cases per day in February when the province reopened after the second wave.

“I do believe it was too high and too soon in February when we reopened,” said Gardner.

Gardner voiced his concern in February, and the Simcoe-Muskoka region was placed in the red-control zone of the provincial framework because of the local case rates. Soon after, Gardner asked for a lockdown (grey zone) for the region, which was met with significant public opposition and lasted only a week.

“The real risk of opening too soon is that you could end up with a fourth wave extending into the summer, and we certainly do not want that,” said Gardner. “I would say there is a possibility it will need to be extended beyond June 2.”

Once the province does lift the stay-at-home order, Gardner would like to see it done in a particular way.

“The first steps to opening up need to be very cautious,” he said. “Personally, I think we need more broad restrictions, possibly on the province as a whole. That is what worked during the first wave.”

At the beginning of the pandemic, the province lifted the first Ontario-wide shutdown with reopening steps applied, for the most part, across Ontario.

“We’ve had success bringing down our numbers, we need to have more success. We need to keep moving in that direction,” said Gardner.

Erika regularly covers all things news in Collingwood as a reporter, photographer and community editor. She has 12 years of experience as a local journalist.
Read more