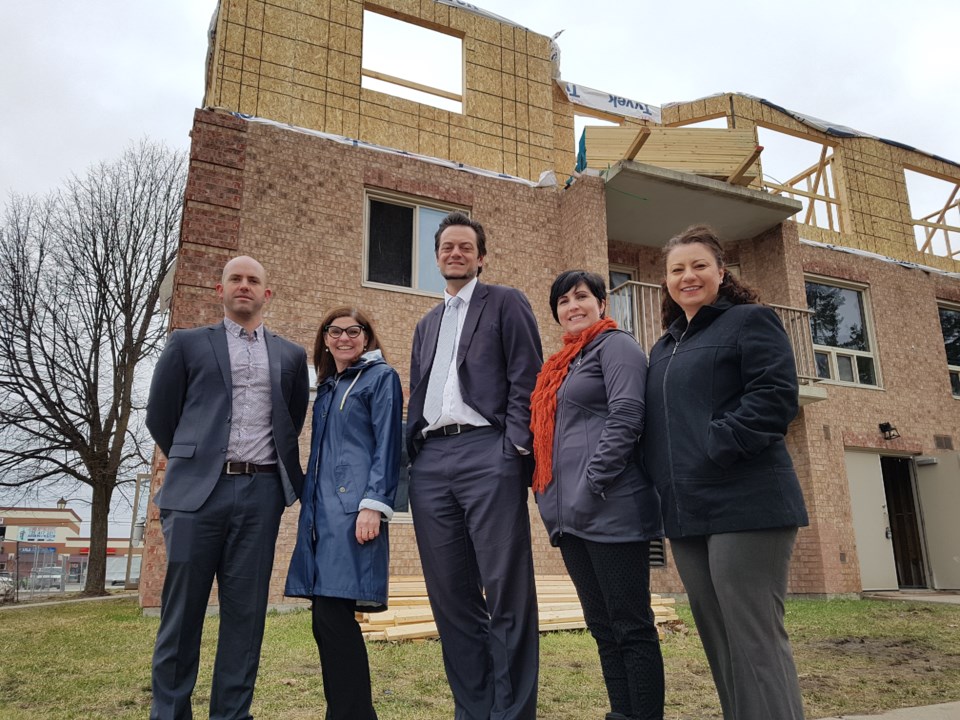 One year after the devastating fire on Little Avenue in south-end Barrie displaced 25 families, the federal government has announced a $2.85 million financial commitment to rebuild and expand the structure.

On Wednesday morning, Minister of Seniors Filomena Tassi was in Barrie to announce the federal government is committing $2.85 million to the rebuild of the Allanview Place project.

In May 2018, the government launched the National Housing Co-Investment Fund (NHCF) and with that initiative and help from the province and the City of Barrie, the new project by the Barrie Municipal Non-Profit Housing Corporation will provide safe and affordable housing for 23 low-middle income families and another 11 units geared toward seniors.

“It is suited for 11 senior units and geared towards that, but it is not necessarily going to be occupied by seniors, that will be up to those making decisions as to what residents need it most,” said Tassi. “The co-investment fund that is part of the National Housing Strategy is a fund that is targeted towards more vulnerable populations, so seniors, women escaping violence, Indigenous people having trouble finding housing and so on. That is what the co-investment fund is all about and that’s where the funding is coming from in this instance.”

Th Allanview project, an existing three-storey building, was destroyed by a fire on April 23, 2018.

The NHCF funding will go towards the construction of a fourth storey with 11 additional units with upgrades for better living.

Mayor Jeff Lehman told BarrieToday the project is slated to be completed in approximately a year, which he said is great timing considering the previous damage done and the addition of another floor.

“With the incredibly tight housing market here and so many people who need housing, the opportunity to create 11 units, if we could move fast enough and not delay the restoration, we didn’t want to miss that chance,” said Lehman.

“I know that any delay for people who are eager to get back here is frustrating," he added. "On the other hand, there will be a brand-new unit here for them that is more energy-efficient, so the power bills will be a lot lower. The building will be accessible for those who’ve had trouble getting up stairs; they will have an elevator. And most importantly, there will be 11 more people who didn’t have a home now enjoying one.

"The adding of homes is worth all the efforts we can put in.”

Of the 34 units, 27 will be affordable and will have rent representing less than 71 per cent of the median market rent.

The new 100 Little Avenue is expected to achieve energy savings and a reduction in greenhouse gas emissions of 35.9 per cent over National Energy Code of Canada for buildings 2015.

Barrie Housing owns and operates 953 housing units across 14 locations with around 3,000 tenants and executive director Erika Erteki said in a statement how excited her organization is to have the assistance from the federal level to better the community.

“The project at 100 Little Ave., is a perfect example of big things coming in small packages,” said Erteki. “Barrie Housing is thankful for the opportunity provided through the National Co-Investment Fund, which has allowed for our organization to turn an otherwise negative situation, into one that will have a positive impact on the communities we serve.”

Colts add some size and skill in today's under-18 draft
Apr 8, 2020 4:45 PM
Comments
We welcome your feedback and encourage you to share your thoughts on this story. We ask that you be respectful of others and their points of view, refrain from personal attacks and stay on topic. To learn about our commenting policies and how we moderate, please read our Community Guidelines.