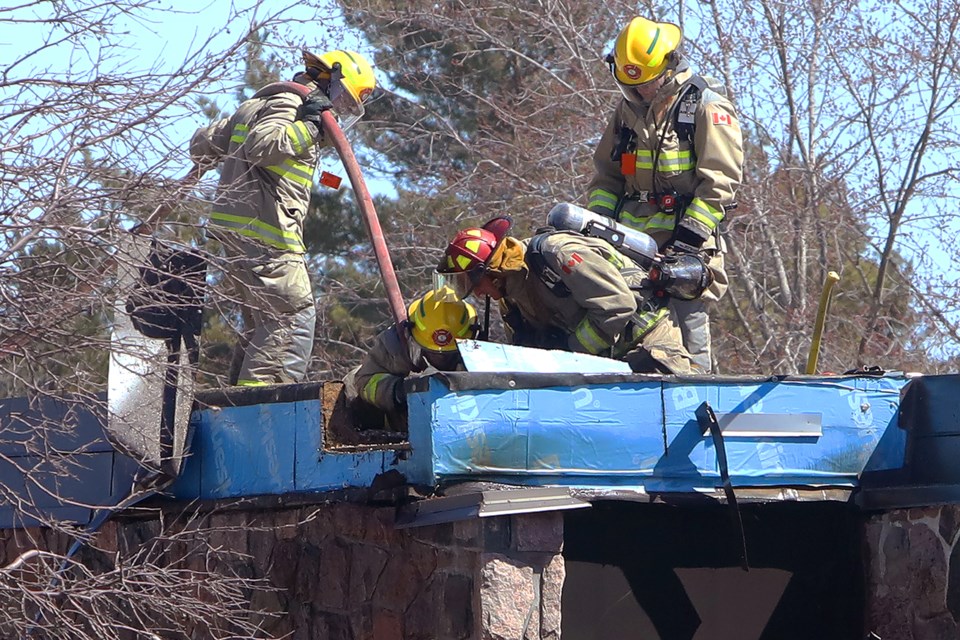 Springwater fire crews try to get at a stubborn fire in the wall and roof of the Simcoe County Museum on Saturday, April 21, 2018. Kevin Lamb for BarrieToday.

NEWS RELEASE
TOWNSHIP OF SPRINGWATER
*************************
At approximately 2 p.m. on Saturday, April 21, 2018, Springwater Fire and Emergency Services responded to reports of a working structure fire at the Simcoe County Museum on Highway 26 in Minesing.

Two stations were dispatched with a third quickly added, resulting in 37 Springwater firefighters and 13 fire apparatus responding to the call. Upon arrival, firefighters found smoke rising from the roof of the museum.

Prior to their arrival, museum staff had managed to quickly and safely evacuate everyone from the building. Firefighters used thermal imaging cameras to detect a fire located in the walls and ceiling of the building.

Crews were able to breach the roof and knock down the fire within approximately 40 minutes. Firefighters worked with museum staff to preserve the exhibits located in the Living and Working Gallery.

“Firefighters did a fantastic job, working quickly to gain control of the fire,” says Deputy Fire Chief Jeff French. “Their efforts ensured that there was minimal damage to the building and artifacts located within.”

The cause of the fire was deemed accidental as a result of ongoing construction activity. Damage is estimated at approximately $50,000.

Good morning, Barrie!
Jul 10, 2020 6:00 AM
Comments
We welcome your feedback and encourage you to share your thoughts. We ask that you be respectful of others and their points of view, refrain from personal attacks and stay on topic. To learn about our commenting policies and how we moderate, please read our Community Guidelines.