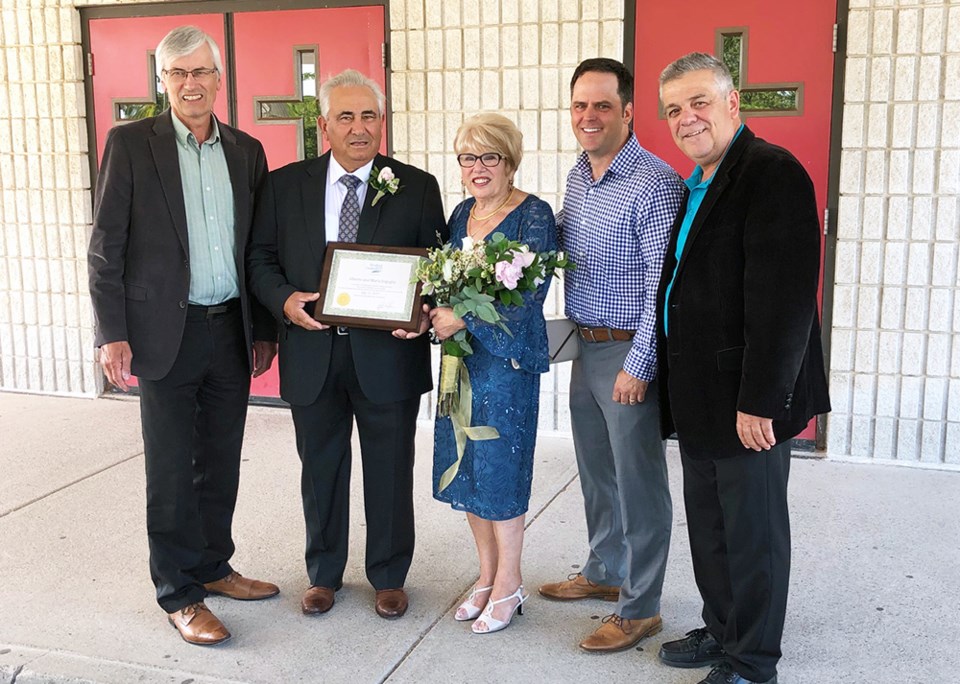 The amazing part of the story is that, although Mary and Albert were distant cousins, they had never met until both emigrated from Italy to Canada – Mary at the age of seven in 1958, and Albert at 16 in 1964.

Both families eventually settled in Bradford, and Alberto and Maria ended up living across the road from each other.

They were married on July 12, 1969, at Holy Martyrs of Japan Catholic Church – where 50 years later, they renewed their vows and had new wedding rings blessed in a ceremony before heading to Woodbridge for a family dinner at a favourite restaurant.

Albert and his brother, Joe, opened the Ingoglia Brothers grocery store in Bradford. Albert then adopted the Foodland banner in 1983, and opened a second store in Oak Ridges in 1989, and with son Tony opened Albert & Tony’s Best Value in Keswick.

He and his son now work in construction, building custom homes.

Mary, after working for 19 years for a hair salon in Newmarket, opened Mary & Vita Hair Design in Bradford  – “and I’m still here, still going strong,” she said. “We’re both so busy working – before you know it, it’s 50 years.”

The couple have two children, Tony and Lisa, and two grandchildren. A third daughter, Vita, and granddaughter, Stephanie Nalli, were tragically killed in a collision on a rural road in 1999.

The double loss drove Mary to launch the Stephanie and Vita Cut-athon, raising funds for the cochlear implant unit at the Hospital for Sick Children. Stephanie, who was born profoundly deaf, had just received an implant, which Mary called “the gift of hearing.”

In 15 years, the event raised more than $400,000 for the unit, as well as awareness of cochlear implants and the research being carried out at SickKids.

Mary was asked the secret of a long marriage.

“Compromising,” she said. “Always compromise between husband and wife.”

Mayor Rob Keffer, Deputy Mayor James Leduc and Coun. Peter Ferragine attended the church recently and presented a certificate of congratulations from the town to the couple.

REVIEW: When Beethoven is done beautifully
Jan 23, 2020 5:45 PM
Comments
We welcome your feedback and encourage you to share your thoughts on this story. We ask that you be respectful of others and their points of view, refrain from personal attacks and stay on topic. To learn about our commenting policies and how we moderate, please read our Community Guidelines.