Owners of Dutch Treats in Bradford share their love story that started out as a long-distance, online relationship
0
Feb 14, 2020 7:30 AM By: Natasha Philpott 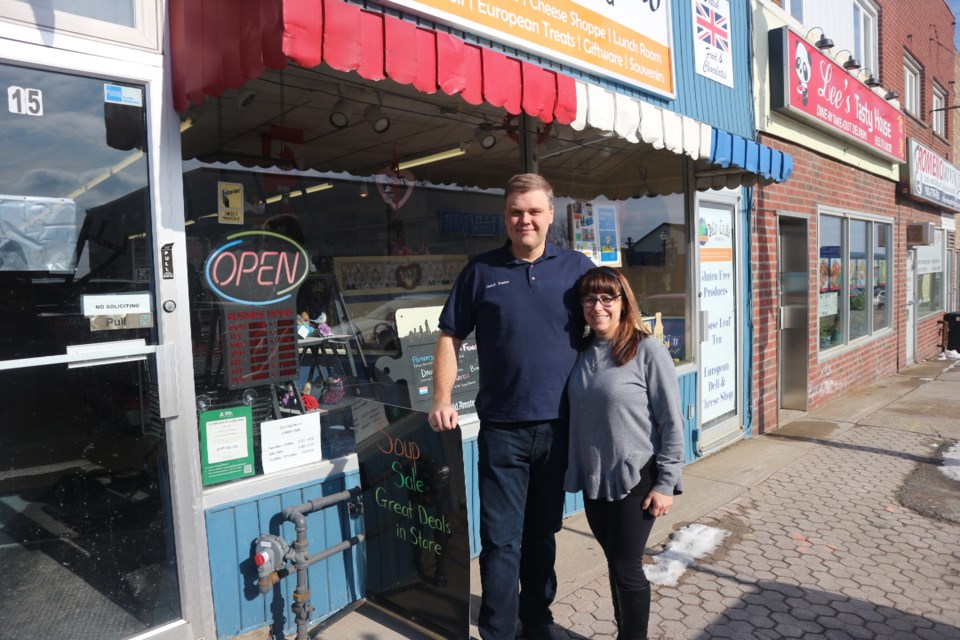 Dutch Treats owners Rob and Tina Bots met online 10 years ago and have been happily married since 2012. Natasha Philpott/BradfordToday

Rob and Tina Bots are the owners of the well-known shop Dutch Treats in downtown Bradford, taking over the business in 2016 after Rob had been bookkeeping for the previous owners for a few years.

The couple, who have been married since 2012, began their love story online. But not on a dating website, as one might assume.

In 2009, the two were recently divorced and would frequently go online to play the war game, Evony to de-stress and escape reality for a bit.

Rob was playing all the way from his home in The Netherlands, while Tina played from her home in Bradford.

Tina started playing the game after seeing an advertisement for it on another website.

“I just went online and I was bored,” she said. “The people (gamers) gave me an outlet to offload, because they don’t know me (personally).”

The game room which they both frequented had about 40 members in it from all over the world, including people from Denmark, Norway, the UK, the United States, and Canada.

In the game, players can communicate using online messaging or video messaging with headsets and Skype.

The pair would see each other online, but didn't actually speak to one another until 2010.

“I never really talked to her (Tina). I left that group and went to play somewhere else,” remembers Rob.

But months later, closer to the end of 2010, he decided to come back and play with the original group again.

When he returned, the group’s administrator made a comment to Rob: "Tina will be happy to have you back,” which left Rob wondering why Tina, a player far way in Canada, would be pleased to have him back in the group when they never even spoke before.

Tina also had no idea why the administrator made the comment, but is happy she did.

“We still have no idea why she said that,” reflects Rob, but it did get them talking in the first place.

“Maybe she knew something?” guessed Tina, indicating it was maybe a sign or a prediction of the future.

After the comment, the pair began talking, not only via online message, but through Skype.

“I told my friend, 'You should hear his voice, he’s got a great accent'. Because I’ve got a thing for accents,” Tina says.

Their first conversations between were mainly about the game and different playing techniques, but slowly transitioned to more personal conversation.

During one of their chats, Tina mentioned that she and a friend were planning to visit Denmark in June 2011 and that they would be making a stop in Amsterdam along the way. It was then Rob suggested he meet them there, then travel to Denmark together.

It was during these travel plans that feelings started to develop between the two.

Rob couldn’t wait until June to meet up with Tina, so he planned a visit to come visit Tina in Canada in March.

“I think you could say that’s when a couple began,” Tina says with a smile.

The pair continued a long-distance relationship for a few months, and shortly after the big trip to Amsterdam and Denmark in June, Rob came to Canada.

“Two weeks after she left, I followed her,” says Rob.

The pair were happy as could be, living together in Bradford and were married the following year in March 2012.

“It was a small wedding,” says Rob.

Friends and family joined in their celebration at a “quaint little place” in Etobicoke called The Applewood House, followed by a catered dinner at their home.

Rob eventually went on to study book-keeping at Everest College, which is how he ended up working for the owner’s of Dutch Treats in 2014.

Then, in 2016, the owners of Dutch Treats approached Rob about taking over the business.

And the couple have been running it together ever since.

“Most days are great,” explains Tina. “We do have some times where we butt heads, but usually we just talk it out.”

“It’s taken us a while, but I think we have a plan for the store, more than we ever did before. We have a vision, whereas before we were going with the flow,” Tina says about their venture in business together.

“Communication and trying to understand the other side,” Rob says of his advice for a successful relationship.

For Valentine’s Day this year, the couple will be working, but have yet to figure out their evening plans.

“We spend everyday together, so it’s like Valentine’s Day everyday,” Tina says with a smile.

Donnie the stray McDonald's cat finds his fur-ever home
Feb 28, 2020 12:00 PM
Comments
We welcome your feedback and encourage you to share your thoughts on this story. We ask that you be respectful of others and their points of view, refrain from personal attacks and stay on topic. To learn about our commenting policies and how we moderate, please read our Community Guidelines.