The mom of a biracial son said a Confederate flag on display at a private residence in town makes her 'fear for her son'
Sep 22, 2019 1:00 PM By: Jessica Owen 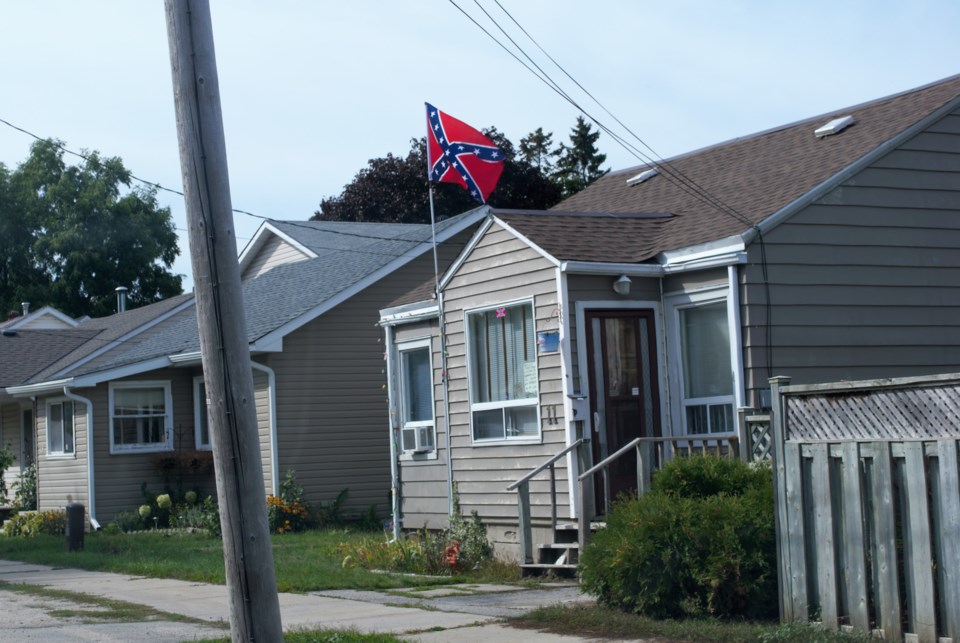 Every weekday, Abigail Hitchens walks her seven-year-old son to school.

Along the way, she’s had to have some uncomfortable conversations with her son, who is biracial, due to a Confederate flag hanging from a house along their route.

“He just always asks why. ‘Why do they hate people? Why do they hate me?’” said Hitchens in an interview with this week. “How do you answer that with a child? I just say to him that there are uneducated people in the world that close their minds to the wonders of what human-kind can be.”

Issues of race and symbols of racism are on the minds of Collingwood residents this week, after two incidents of graffiti containing racial and homophobic slurs were reported in town over the past month. Collingwood OPP are investigating the two incidents as mischief.

Also adding to the conversation is photo and video surfacing this week of Liberal leader and Prime Minister Justin Trudeau donning black and brownface in the past, and what effect that might have on his re-election campaign at the federal level.

Hitchens said she’s purchased a camera to surveil her property.

When she looks at the flag, Hitchens said she feels diminished and depressed.

“It makes me fear for my son,” she said, trying to hold back tears. “How is he expected to grow when there are still those who refuse to accept difference? How can I sit complacent?”

While Hitchens is white, her husband is biracial (half black, and half white).

Over the years, Hitchens said she’s dealt with instances of racism her son has experienced at school, including insensitive comments from other students and tone-deaf assignments. She said she’s approached the school whenever the assignments have crossed a line, but the damage has already been done.

She said her son first came to her at the age of four with questions.

“He said to me, “Mommy, you’re like the sun and I’m like the moon and I wish I was like the sun,’” said Hitchens. “I didn’t understand what he was trying to say, until I realized it was about the colour of his skin. Somebody had already mentioned it.”

With immigration on the rise especially in Simcoe County, Hitchens has concerns that intolerance around town will only get worse if not faced head-on.

“I can understand how some people might think the Confederate flag is a symbol of solidarity, but in Canada, if you fly that flag, to me it is only indicative of racism,” she said.

According to the Anti-Defamation League, the Confederate flag is a symbol that is frequently used by white supremacists, but which also has been used by people and groups that are not racist, especially in the southern U.S., as a symbol of Southern heritage or history.

However, a growing number of people worldwide recognize the flag as a hate symbol.

Hitchens said the context of the symbol being brought back in the 1950s and again in the 1970s to represent white supremacy and racism can’t just be ignored.

“What is your point in flying that flag? Because, you can’t be ignorant. You hang it because you have something to say,” said Hitchens. “It affects people deeply and emotionally.”

While Hitchens said she has seen the owner of the flag, she hasn’t approached him about her concerns.

“There are signs in the window saying no visitors are allowed. I have seen a gentleman come out,” said Hitchens.

Dennis Morris owns the home that flies the Confederate flag.

He’s lived in his home for about 15 years.

“It means to me the same thing it meant to the people of the south when Canada fought for the Confederate army. It means fighting for your freedom and your beliefs,” he said.

Morris participates in Civil War re-enactments. He got more involved in the hobby after his wife passed away three years ago. The flag has flown on his home since he took up the hobby.

“It’s helped me move on,” he said. “I’m not prejudiced or racist at all. I grew up in the U.S. There is a lot of prejudice there, and there is all over the world, but I’m not. What that flag means to me is being able to be free to live my life. That’s what it was meant to be.”

Morris said he’s only ever had two people come to him to speak with him about flying the flag. He said he’s aware it has been co-opted to be used as a symbol for white supremacist groups, but it shouldn’t be about that.

“You have white groups who are trying to be prejudice and are trying to take things over. They are using a flag that has nothing to do with them. That’s not what that flag means,” said Morris. “People don’t know these things. They look at the flag and (assume) everybody’s racist. It’s not.”

Morris said he won't take the flag down.

“Over my dead body, it will come down. It’s about heritage, pride and honour,” he said. “They need to look up the history before they condemn me.”

In regards to the graffiti, the Town of Collingwood has specific bylaws in place that require the owner of a property to take appropriate measures to remove unsightly marking, stains, or other defacement, including graffiti, occurring on an exposed exterior surface of a building and, where necessary, to restore the surface as nearly as possible to its original condition.

According to Adam Ferguson, communications officer with the Town of Collingwood, there is a sign bylaw in place however it pertains specifically to signs of a commercial nature.

Section 2.1 of the Town of Collingwood sign bylaw specifically states that the bylaw doesn’t relate to window displays, flags, religious symbols or any display or construction not defined within the bylaw.

“As such, we would not be able to regulate or prohibit someone flying a Confederate flag or any other non-commercial flag on private property,” said Ferguson.

“It’s a flag that can mean different things depending on the person,” said Hachey. “The bylaw doesn’t really have any repercussions (in regards to Confederate flags) and we, as far as I know, don’t either, especially when it’s on private property.”

Anyone wanting to file a complaint about graffiti should contact the town’s bylaw enforcement division. All complaints about mischief/damage to property should be reported to the police immediately.

Hitchens has started a petition to urge council and town staff to develop a bylaw that would prohibit the visible display of symbols like the Confederate flag.