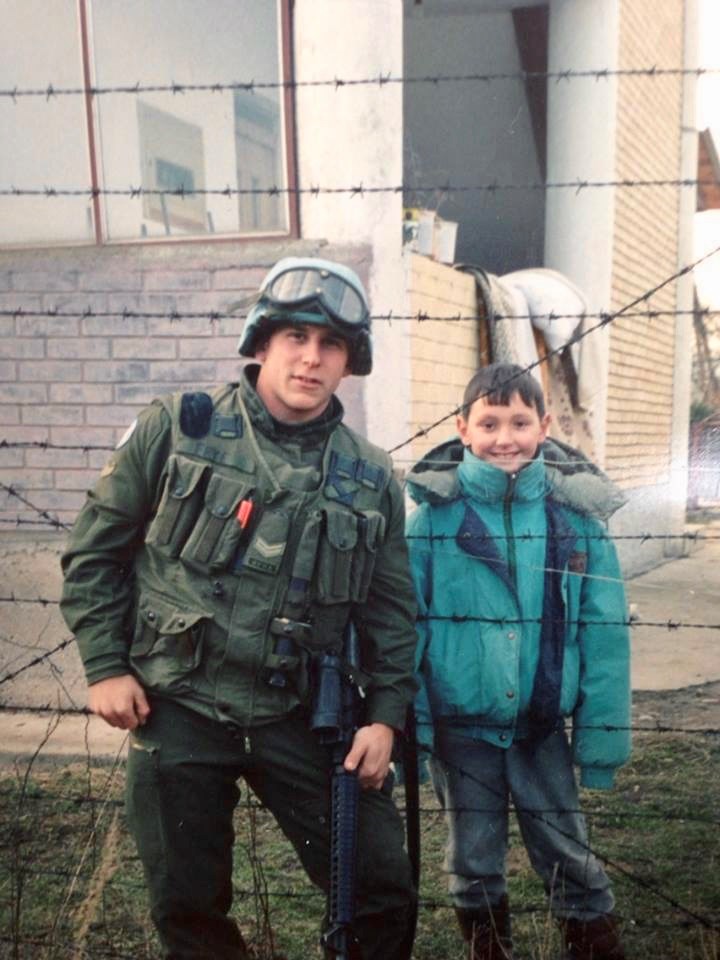 It was a reunion 24 years in the making and made possible now through the internet.

"It was on my list of of things to complete in my life, to make an honest attempt to find this little boy. But more than anything what it means to me is, it's symbolic of probably thousands of relationships like this and I'm just lucky to be able to find this boy," said an ecstatic Frye.

In 1994, the Barrie officer served with the United Nations Protection Force (UNPROFOR) during his nearly 8 years with the Canadian forces

Part of his duties included landing zone security for the UN helicopters and there was a little boy who would come and see the soldiers at the fence.

"I soon became friends with him. I remember feeling sad that he had to live through this war. The people struggled for the basics of life and even the little things - things that you and I take for granted, meant the world to them," said Frye.

"I started to bring candy for Amir. My mom would send things in the mail to give Amir: candy, pencil crayons and a watch! I remember how excited he was to have this watch. Amir did not speak English but the excitement was obvious by his big smile and the look in his eyes."

Two days ago, Frye finally decided to reach out to a reporter in Visoko.

He sent the picture of Amir, google maps images of his old compound and the helicopter landing zone and used his pen to point in the picture where Amir's home was in 1994.

The reporter found Amir's sister in one day and she forwarded Frye's contact information to Amir.

The two men, both now fathers, reconnected after more than two decades.

"As soon as I saw his picture I recognized him and I sent him a message and he couldn't believe it. We had a great talk," said Frye

"In 1994, during the war days, lives of Bosnian people were filled with sadness, pain and fear.  In the time when it was easier to cry than laugh, one wonderful soldier and beautiful human being put a smile on a little boy's face," Amir wrote to Frye.

"Today that boy is 32-years-old, became a father and will teach his child to be a good person as an example to Justin."

There has been an outpouring of support and congratulations from Bosnia, with many people asking Frye to help them find soldiers they connected with so many years ago.

Frye notes the tour in Bosnia was before cells phones, digital cameras and social media.

Amir's phone has been ringing off the hook from well-wishers.

He was a refugee who moved to Sweden where he now works as a delivery driver and is close to getting is taxi license.

For Frye, the reunion was closure.

"People that were over there I'm sure think about that tour everyday as did I and some come back with struggles from the memories. This is something I said was going to do for closure and I never, ever lost his picture. I looked at it frequently and my kids would ask about it," said Frye

"It shows that the world is a small place. It just shows you that little things can go a long way."

Frye, who has been a police officer for 20 years, summed up the reunion on his Facebook page:

"Today, something wonderful happened for me."