A conservatory tour of Italy

This week in Wine All The Time, Vin tells us about the Algoma Conservatory of Music and some very fine wines to enjoy along with quality musical performances at home
Vin Greco May 18, 2019 10:00 AM

Last weekend, a group of friends and I enjoyed a special evening. We had bid successfully on a wine-tasting dinner which was an auction item at a Gala in support of the Algoma Conservatory of Music

Though Sault Ste. Marie has a population of less than 80,000, The conservatory is actually the second largest in Ontario, after the Royal Conservatory of Music in Toronto. For decades, it has prospered despite being housed in portables at Algoma University, but all that changed when it was able to purchase the magnificent heritage sandstone building which originally was the headquarters for Francis H. Clergue, a 19th century industrialist who founded a steel plant, a paper mill, a railway, and a hydro-electric operation all centred on Sault Ste. Marie.

The headquarters had seen better days, but it is being restored to all its former elegance and beyond. Visiting musical artists marvel at its terrific acoustics with its 14-foot ceilings on the two main floors

Now, an elevator has been installed, and what was once simple storage space on the third floor is being transformed into The Loft, which features an astonishing and versatile performance space with a soaring 25-foot ceiling, and will include a world-class recording studio, a full kitchen, and additional smaller multi-purpose rooms.

As Principal Guy Traficante describes it, when a violin plays, it sounds as if you are inside the instrument. 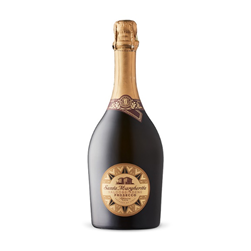 This is an exceptionally smooth Prosecco from the more elevated ‘Superiore’ region of production. It has a soft but persistent stream of carbonation as well as a gentle fruitiness.

Along with fruit, including stuffed figs, there was the perfect cheese to match the wine, one infused with both Prosecco and raspberries.

The Tasting then adjourned to the Traficante home, where dinner was accompanied by Italian wines selected and poured by Adriano Di Cerbo who had donated the auction item in support of the Conservatory.

The Conservatory is in the midst of an exciting fund-raising campaign which is being aided by matching grants.

The dinner began with a seafood salad which was accompanied by the 2016 Vietti Arneis from Italy’s northern Piedmont region. Arneis is a white grape that was rescued from obscurity and near-extinction about 40 years ago. Until then, it had been relegated, according to Adriano, to serving as “bird-feed”. It was planted near the red Nebbiolo in an attempt to keep the avian raiders away from the grape that gives us the great Barolos and Barbarescos. In fact, writer Jancis Robinson reports that, in the 1970’s, Vietti was one of only two wineries which was bottling an Arneis.

On the blog-site, “opening a bottle”, writer Kevin Day relates how Luca Currado of Vietti told him that in the 1960s, there were only about 4,000 vines of Arneis growing in the Roero region. They were used to blend with lower-grade Nebbiolo, creating a pinkish table wine, which, as Luca notes, the farmers called “a mother-in-law wine.”

The Vietti Arneis is a full-flavoured rich white wine with a light gold hue. It is lively on the palate, and seems to have a slight saltiness which made it perfect with our salad 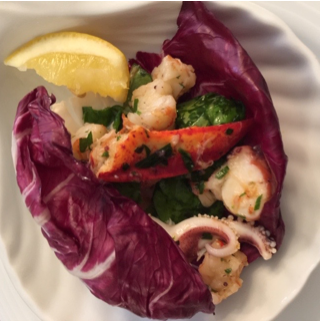 While the Vietti is not available in our market, some bottles remain of the Fontanafredda Pradalupo Roero Arneis 2017, $17.95, which was released by Vintages back in October.  The acidity is intentionally preserved, giving it a lifting crispness and long fresh finish. Vintages describes it as “floral and ripe, with peach, pear and spice tones and a vibrant acidity. Perfect for seafood.”

In the coming months, Vintages will likely release further bottlings of Roero Arneis.

With a simple course of Pecorino Romano cheese, dark bread, and olive oil, Adriano presented the 2016 De Angelis Pecorino white wine from the Marche region on the Adriatic coast.

What could be better than a wine and a cheese from the exact same geographic region? In this case, we have another example of a grape being brought back from obscurity. The De Angelis is made from the fruit of 50-year-old vines.

In comparison with the Arneis, this was a little softer, with pear and savoury herb notes. While the acidity is crisp, it is more muted than that found with the Arneis.

Some bottles remain in our system at $15.95, but you can also seek out the Velenosi Villa Angela Pecorino 2017, also $15.95, which James Suckling describes as “layered and flavorful white with cooked lemons and apples and a hint of lemon peel. Full body. Delicious finish.” - 91.

On the May 25th Release, Feudo Antico Biologico Pecorino 2017, $15.95, will be available, this from the Abruzzi province south of Marche. Vintages highlights its emphatic citrus and pear/apple character.

With a simple homemade pizza, we then enjoyed our first red, which was for me, a first. The 2006 Vestini Campagnano is made from Pellagrello Nero. The winery, situated in Terre Del Volturno, Campania, explains that it was in 1990 that research was started on a few vines growing in the back yard, and that by 2000, this noble vine that had once been highly prized was back to the level required for commercial production.

Adriano said that his mother grew up in Campania, and when he asked her about Pellagrello, she exclaimed that this was what the family made their wine from, and she remembers pruning vines and harvesting grapes as a young girl.

The wine is distinctive and rustic with deep dark fruit flavours and a dry, cherry liqueur note. There is some tannin here, along with dry herbal notes that the French might describe as “garrigue.”  It is distinctive, big, and in its own way delicious.

I am trying to find the Ontario agent for this wine, but so far, no success.

The Entrée for our dinner was braised Beef Short Ribs served in a rich tomato based sauce. The wine was the 2006 San Salvatore Jungano Aglianico, another top-notch red from Campania. It is inky dark and fully integrated with deep cassis and dark cherry fruit. Quite savoury, with a licorice accent on the finish, this impressive wine has earned scores of 91 across the board. This particular wine is not regularly found in our market, but Aglianico has earned a place of prominence.

Coming on May 25th is Vesevo Beneventano Aglianico 2015, $16.95. Of Aglianico, Vintages says to expect wines that are “plump and juicy with intense, concentrated black fruit, spice, smoke and mineral. Their robust structure makes them ideal for barbecue fare.”

An Italian ricotta cake with raspberry drizzle was served for dessert, and along with our espresso we enjoyed the Ramazotti Black Sambuca liqueur –this has oodles of licorice and is slightly thicker and richer than the clear versions we can also encounter. It is available through the LCBO for $24.70.

The whole evening played out perfectly. We encountered wines that were unfamiliar, enjoyed excellent food, and were treated royally. That it was in support of an excellent cause was the icing on the cake.

If you are interested in learning more about the Conservatory, visit the website at algomaconservatory.com. It is worthy of your support. 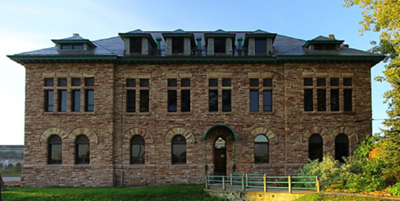 The Algoma Conservatory of Music
FYI

I have just learned that the LCBO has lifted its “hold” on Toro Bravo, the $7.95 Tempranillo/Merlot that has been flying off the shelves since January. Stores can now order as they wish, and so it should be easier to find and enjoy this very popular wine.

Casa Monte Pío Albariño 2018, $18.95, is a fresh and intense white from Spain, and carries the suggestion of pear and orange fruit, along with some minerality and salinity. Decanter – 89.

Balthasar Ress Hallgarten Trocken Riesling 2016, $19.95, from Germany’s excellent Rheingau region, pleased the Robert Parker people who awarded it a 91. They refer to it as lush and “perfectly round and juicy.”

Catena Chardonnay 2017, $19.95, is an Argentine effort which also earned 91 from robertparker.com. Made from fruit selected from several vineyards, the wine ages in used barrels on its lees for 10 months. Honey, lemon, nectarine and pear notes are at play here, with the suggestion of vanilla, too, on the clean finish.

Robert Mondavi Fumé Blanc 2017, $22.95, from Napa Valley, the latest vintage of this distinctive Sauvignon Blanc is now on the shelves. Mondavi was one of the first wineries to use slightly toasted barrels to craft this varietal, and the result is harmonious and pleasurable. The fruit impact is more subtle than wines from New Zealand, with the gooseberry and citrus effect more in support of gentle peach and tangerine. Well-crafted and impressive. 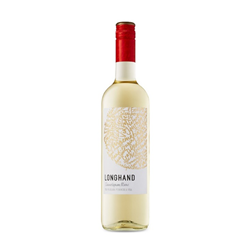 Mulderbosch Cabernet Sauvignon Rosé 2018, $12.95, is a South African favourite that always delivers great flavour. The John Platter Guide refers to a “lovely juicy mid-palate tanginess that invites the next sip.” This has good zip and enough red berry fruit to stand up to pork and veal easily.

Lorgeril Gris de Garille 2018, $13.95, is new to the Vintages, and hails from the Midi region in France. Pale in colour, it still has good depth and raspberry, red currant fruit. It is night—harvested in order to preserve freshness. 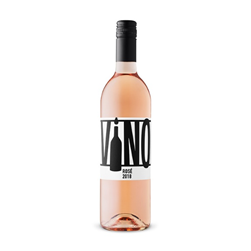 Charles Smith Vino Sangiovese Rosé, $17.95
Charles Smith Vino Sangiovese Rosé, $17.95, from Washington State pushes the envelope for an American Rosé. Smith is noted for his distinctive and expressive wines. Smith himself says this about his wine: “Alpine strawberries, mountain-held and a smack of minerality. Open this wine. Then on to Italian melon, guava and passion fruit. That, coupled with the latter, fills the palate and the senses with absolute deliciousness.”

Marqués De Toro Finca La Moura 2012, $13.95, from the Mencia region of Spain is made from the Mencia grape. It is plummy and very flavourful with good dark fruit along with earthy and herbal notes. Rustic and tasty, it received a 90 from the Wine Enthusiast.

Stefano Farina Dolcetto di Diano d’Alba 2017, $16.95. Dolcetto is widely planted in the area around Alba in the Piedmont. This wine is fresh, but dry, with tart red cherry fruit and some anise overtones. Vintages suggests serving it with grilled steak and mushrooms. 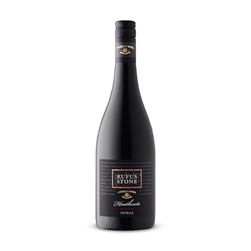 Canadian inflation and the construction industry