'I welcome a regional approach,' says Barrie mayor, noting 'there isn’t just the expectation that all affordable housing or social services delivery' occurs in Barrie
Aug 11, 2020 4:30 PM By: Jessica Owen 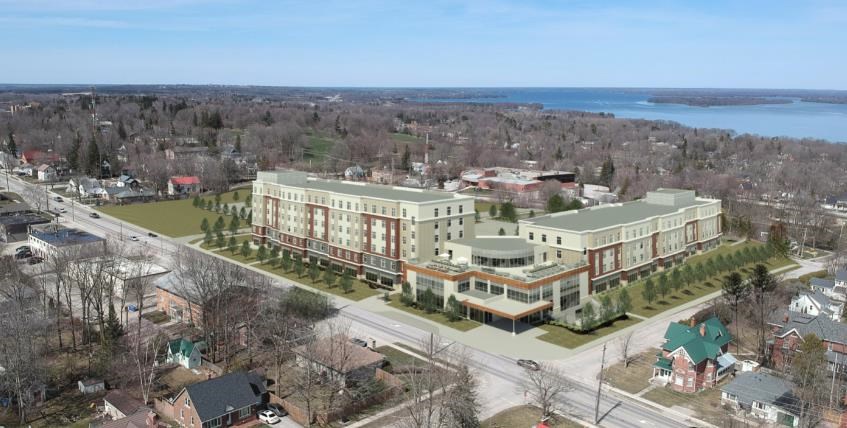 This is a preliminary conceptual design for the Orillia affordable housing hub project, which will be located on the former ODCVI site. The project was approved today by County Council. Contributed image

County staff went back to the drawing board and brought forward a more detailed plan for its new affordable housing hub project in Orillia to county councillors on Tuesday morning.

During County of Simcoe council’s committee-of-the-whole meeting this week, staff provided councillors with more detailed plans for the $80-million project that is planned to be built on the former Orillia District Collegiate and Vocational Institute (OCDVI) site on West Street North.

Councillors voted in favour of proceeding with the project, despite some trepidation from some councillors regarding the price tag.

The project has an estimated completion date of spring 2023.

While Leduc acknowledged the county has made investments in other sectors in Bradford such as significant road work, he questioned the process of community consultation for the Orillia project.

Trevor Wilcox, the county's general manager of corporate performance, advised that Bradford West Gwillimbury is next on the list to receive funding for an affordable housing project, along with Barrie.

Barrie Mayor Jeff Lehman said taking turns on investments is the nature of projects funded through the County of Simcoe.

“There are days when we put a lot more money in, and there are days where that money is spent in our community,” said Lehman. “I’m much more comfortable with the project (now), even though the price tag is significant.”

“I welcome a regional approach that sees investment in say New Tecumseth, Collingwood, and Orillia and there isn’t just the expectation that all affordable housing or social services delivery in the region would occur in the largest urban centre,” he said.

When councillors first saw plans back in June, they raised concerns about the cost of the project without having enough details to justify the expenditure. Ultimately, they decided to ask staff to report back with more detailed costs before they would agree to proceed with the project. To read our full story on that meeting, click here.

According to the presentation, the hub development will create a total of 130 units, which include three replacement social housing units and 127 new affordable housing units.

Also on the site will be a commercial portion that will include Ontario Works, the VON Adult Day Program, Simcoe Muskoka Family Connexions, an EarlyON Child and Family Centre, a housing office and partner agencies.

There will also be shared spaces such as green spaces and a community kitchen.

New information provided to councillors this week included staff estimates that the project will generate a cumulative net benefit of about $800,000 annually once units are occupied. The cost to build each residential unit rings up at about $391,008, which does not include the cost of the land.

Ramara Township Mayor Basil Clarke asked about the cost of the land, mentioning that when the project was first proposed there was the possibility of selling some of the land to another buyer down the road should it not all be used.

Wilcox advised that selling some of the land after the project is completed is still an option on the table. He also said the revenue from selling off three existing Orillia social housing units would also be put back into the cost of the project.

“It will definitely help,” said Wilcox.

The initial Orillia Hub project costs of about $80 million will be shared between the county and the cities of Barrie and Orillia.

Staff mentioned during the presentation that funding avenues would be pursued through provincial and federal governments once the project was approved, which could then reduce the amount to be paid by municipalities.

The Ontario Priorities Housing Initiative (OPHI) allocation of approximately $2.4 million, and the Social Housing Reserve of approximately $7.9 million will also be designated to the project to be prepared as shovel-ready.