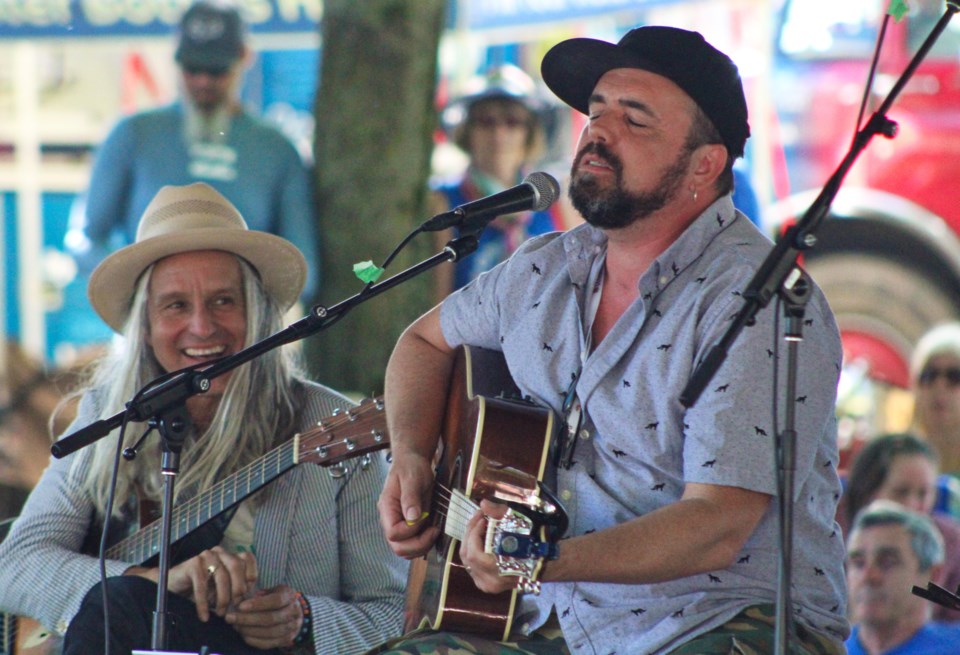 NEWS RELEASE
MARIPOSA FOLK FESTIVAL
*************************
Mariposa Folk Festival has announced that, for the first time in its 60-year history, it will be hosting a free online concert series over the coming months called Mariposa Virtual Stage.

Episode 1, hosted by CBC Radio One’s The Next Chapter producer and host Shelagh Rogers, will launch Sunday, June 28 at 8 p.m. EST, with an online watch party on Mariposa’s Facebook page. For those who miss the launch event, the concert will also be available on Mariposa’s newly designed website at www.mariposafolk.com.

After making the decision to cancel this year’s festival due to COVID-19, the Mariposa Virtual Stage aspires to keep the festival’s community and patrons engaged and musically satisfied until next summer.

“With an incredible line-up and a meaningful milestone, it was difficult to make the call, however it had to be done,” Mariposa president Pam Carter says about making the decision to cancel this year’s festival. “We value the passion and commitment of the Mariposa community, so we’re excited to announce an online concert series that will keep spirits up and allow the community to celebrate music together in the safest way possible.”

Episode 1 is a 20-minute video, paying homage to folk legend and Mariposa veteran Gordon Lightfoot. Audiences will get the opportunity to listen to an unreleased recording of Lightfoot’s 1964 Mariposa performance of Early Morning Rain.

The second part of Episode 1 features Canadian acoustic-folk duo Dala. The Juno nominees bring a fresh sound of acoustic pop and will pay tribute to the folk legend by performing their rendition of If You Could Read My Mind.

Unlike any other online concert, Mariposa Virtual Stage will combine contemporary performances with never before seen archival recordings and materials. Each Episode will consist of short pre-recorded online performances, with contemporary performers paying tribute to some of the folk legends who graced the Mariposa stage over the years. The Mariposa Virtual Stage will also host one longer concert, which will feature special headliners and a Mariposa-inspired workshop.

Carter is confident that this first-ever online series will benefit the festival in the future saying, “With Mariposa Virtual Stage, we want to kick-start the 60th anniversary celebration which will continue next summer in 2021. Mariposa Virtual Stage will be another example of remaining true to our roots - for generations to come”.

Audiences are encouraged to share their music-viewing experience using the hashtag #MariposaVirtualStage on social media.

Canada’s most iconic music event, the Mariposa Folk Festival was first held in Orillia in 1961. It later moved to Toronto and other sites in Ontario until returning home in 2000 to Orillia. The three-day festival is a family-friendly celebration of song, story, dance and craft in the bucolic setting of Tudhope Park.

Over 60 artists play on 11 stages throughout the park including a pub stage, with outstanding evening main stage performances. Special areas for children’s activities, artisans, and food vendors make Mariposa a magical experience for people of all ages. For more information, visit www.mariposafolk.com.

Cottagers allowed back on Christian Island, but new rules apply
Aug 6, 2020 4:00 PM
Comments
We welcome your feedback and encourage you to share your thoughts. We ask that you be respectful of others and their points of view, refrain from personal attacks and stay on topic. To learn about our commenting policies and how we moderate, please read our Community Guidelines.