Police chief sorry for posing for pic with controversial group

Sudbury chief, who posed with local chapter of the Soldiers of Odin at a charity event, says he should have declined the request
Aug 24, 2017 8:39 PM By: Darren MacDonald 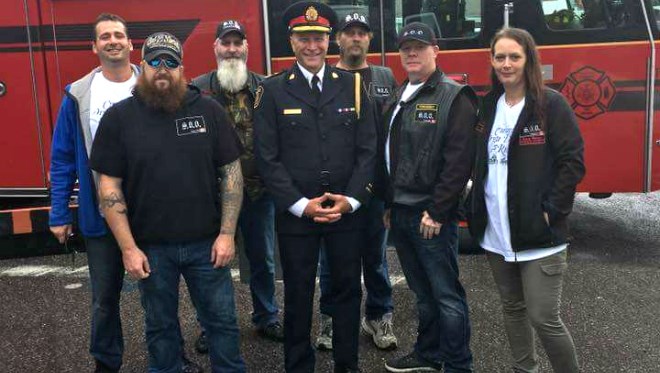 Greater Sudbury Police Chief Paul Pedersen is apologizing for posing for this photo with local members of the Soldiers of Odin. (From Facebook)

SUDBURY — Greater Sudbury Police Chief Paul Pederson is apologizing for posing for a picture with some local members of the Soldiers of Odin, a group that began in Finland and is accused of being anti-Muslim and anti-immigration.

In a statement Thursday afternoon, Pedersen said the photo was taken at a charity event and there was no obvious reason not to agree.

“As a non-partisan public official I am often asked to be photographed with members of the community or attendees at events,” the statement said. “At times, these could be with individuals with very polarized political views in the view of some. When such requests are made, they are on the spot, and unless there is an obvious reason why I would respectfully decline, I do agree to such photographing.”

He said as far as he was aware, the people in the photo were volunteers for the Blue Door Kitchen.

“In my role as chief, I try not to put myself or the organization in compromising situations when people ask for a photo with me, but recognizing that there are those that associate the Soldiers of Odin with far right views, especially with current events being what they are globally, I could have and should have politely declined this request,” Pedersen said in the statement. “This photo should in no way be interpreted as support for this group.

“As the child of immigrant parents, I have always supported diversity and inclusion for all and do not support any group that opposes these values. In fact, last week, I had the great honour of being the Presiding Official at the Canadian Citizenship Ceremony that welcomed over 50 new citizens to our community.

“I apologize and regret that this photo in any way was an indication of my support for this group. These Blue Door Kitchen volunteers were helping at a community event on this day and it was in this context that I stopped briefly for the photo.”

“I confirm our full support for the chief and the position that he takes with respect to these types of photo requests,” Vagnini's statement said. “As a highly engaged chief, he is regularly at events with many members of the community who hold diverse and often controversial political views. This is one of the challenges of being out in the public and being accessible.

“The circumstances that gave rise to this photograph were that the individuals were volunteering for a charitable community organization which our chief and this board supports. He was asked to pose for a picture with those volunteers.

“We are proud of his efforts to embrace the community, and certainly recognize that at times, he cannot simply pick and choose who he encounters on any given day. This photograph has resulted in a public criticism which the chief has acknowledged and taken full responsibility for.”

In an email interview, David MacKinnon, a local member of the Sons of Odin and president of the Ontario chapter, said groups in Canada – including about 20 members in Sudbury -- have officially cut ties with their extreme cousins in Finland. But MacKinnon said he understands why Pedersen is distancing himself.

“I see his point, he can't be seen as supporting a far right group," MacKinnon said Thursday. “We are, however, not a far right group and we are not against immigration at all. Most of Canada is made up of immigrants from one country or another. The police chief has an image to uphold so I do see where he is coming from.”

When asked why he would join a group associated with such extreme views, MacKinnon said he was attracted by the good work they were doing.

“I joined because a friend was a member and he was out there doing all this good work and great things,” he said. “I wanted to be a part of that. As for having the same name, yes we do, but during my time here we have met a lot of great people and we have completely cut ties with Finland.”

According to the Sons of Odin Finland Facebook page, the only chapter they recognize in Canada is one in Quebec. MacKinnon said that's because groups like his won't follow their racist agenda.

When asked why they would keep same name, he said members decided it wouldn't make a difference to how the public views them.

“We took a vote across Canada and the majority voted to keep the name,” MacKinnon said. “Even if we were to change our name, the public would just see us as former Soldiers of Odin the racist group. We would just be the new group trying to hide something.

“We have been here in Sudbury for well over a year now and there is not one bad thing that anyone can say about us that is legitimate, aside from having the same name as Finland. But again, we are not Finland we are Canadian. We will help anyone no matter what race they are if it is in our means to help them, no matter where they are from.”

ONTARIO: Provincial budget deficit projected to jump to $38.5B in 2020-2021
Aug 12, 2020 1:15 PM
Comments
We welcome your feedback and encourage you to share your thoughts. We ask that you be respectful of others and their points of view, refrain from personal attacks and stay on topic. To learn about our commenting policies and how we moderate, please read our Community Guidelines.