Two local Titanic experts are against a proposed plan to dig up victims buried in Halifax
0
Apr 11, 2019 2:20 PM By: Meghan Groff 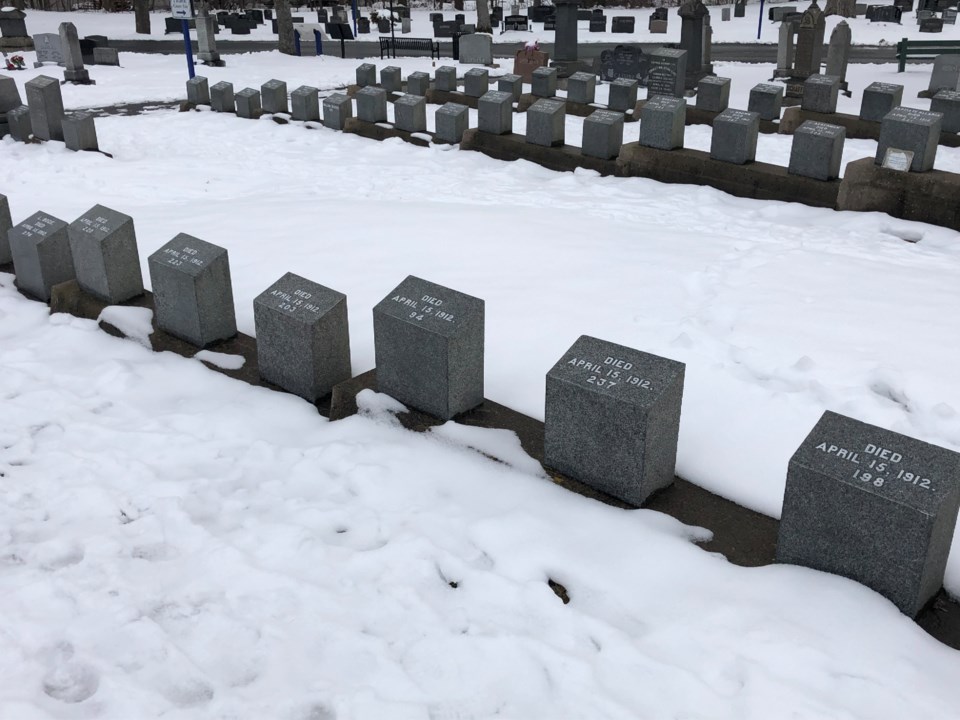 Graves of some unidentified victims of the Titanic buried in Fairview Lawn Cemetery (Meghan Groff/HalifaxToday.ca)

HALIFAX - When the British Titanic Society Convention is held in Southampton, Hampshire, England this weekend, one American man will be presenting his proposed plan to identify unknown victims buried here in Halifax.

According to the conference itinerary, as part of 'Project Name Them All : Naming the unknown victims in Halifax,' Bill Willard wants to exhume the remains in hopes DNA can be found to identify them.

Local historian and author of Titanic Victims in Halifax Graveyards, Blair Beed, will be flying overseas for the annual meeting.

He's looking forward to hearing Willard speak, but is very much against his idea.

"Let's not dig up and disturb everything on one person's idea that this is something to do," said Beed.

The luxury liner sank less than three hours later and over 1,500 people died in the disaster.

Only 337 bodies were recovered, 328 by three ships dispatched from Halifax.

The Maritime Museum of the Atlantic says 119 were buried at sea and 209 were brought back to Halifax.

Some of those were shipped to their home communities, but 150 victims were buried in three local cemeteries. Over 40 of them remain unidentified.

Darryll Walsh of the Titanic Society of Atlantic Canada said Willard wants to make a TV documentary about the project.

"He's a minor player in the Titanic field," Walsh said. "He has been down to Titanic on one of the dives, so he's not completely out of left field, but his 'Name Them All' project certainly is."

Walsh said, so far, Willard's project has been hitting a lot of roadblocks.

Neither Mount Olivet, a Roman Catholic cemetery, nor Baron de Hirsch, a Jewish cemetery, have any interest in disturbing their grounds.

"You do not exhume Jewish bodies period. End of story," he told NEWS 95.7's The Rick Howe Show. In addition Mount Olivet sent Walsh a statement Thursday morning saying it has declined to be a part of the project.

However, most of the victims, 121, are in the Halifax Regional Municipality-owned Fairview Lawn Cemetery.

A spokesperson for HRM confirmed to HalifaxToday.ca Willard has reached out to express his interest in exhuming the unknown victims.

"We are not considering this request," said Erin DiCarlo in an emailed statement.

"Just leave them in peace," said Walsh, adding it would be a desecration to bring in a backhoe to dig up the graves.

"It's been over 100 years, let them rest in peace," agreed Beed. "There's nothing to be settled, there's not inheritances to be awarded, there's no immediate relatives to be satisfied. It should be just left as is."

In addition, Walsh said, because the bodies are buried closely together, in order to exhume one victim, the graves on either side would also need to be disturbed.

"In order to do this, you would need the okay of the relatives of those who have been identified," Walsh explained.

In 2001, the remains of an unknown child were exhumed at Fairview Lawn Cemetery in an attempt to identify the little boy.

Prior to that, it was thought the grave belonged to 2-year-old Gosta Palsson, who was travelling on the Titanic with his mother and three siblings. However, DNA testing in 2002 suggested the child was in fact Eino Viljami Panula, a 13-month-old Finnish boy.

In 2007, a second DNA test was done, which had led researchers to now believe 19-month-old Sidney Leslie Goodwin from England is the unknown child.

Beed said the mix-up is all the more reason to leave the graves alone.

"We've done it once already. They found the unknown child and identified him as the wrong child, then re-identified him as the right child, which was upsetting for one family that had come all the way over from Finland before they realized it wasn't who they thought it was."

Both Walsh and Beed point out, even if Willard were able to get permission to go forward with his project, because of the water table, there's a good chance he may not turn up anything at all.

"When they did the unknown child, they also dug up two graves side-by-side further down in the plot of land, and they found there was nothing left in the grave because they were buried in pine coffins, on a hill, in a trench, and nature took away the remains," Beed explained.

"There may be nothing left."

Walsh said the team looking to identify the unknown child were successful because they got lucky.

"The only reason they found any part of that baby was the fact there had been a brass plate placed on his chest when he was buried in 1912," he said. "The brass plate preserved some of the body, so DNA was able to be extracted."

Beed hopes Willard will take a gentle approach during his presentation in Southampton Saturday afternoon.

"But I don't wish him any success," he added.

Born in Michigan, raised in Ontario, schooled in Indiana & lives in Nova Scotia; Meghan is the community editor for HalifaxToday.ca.
Read more