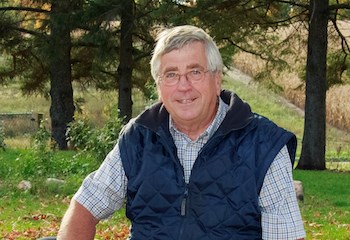 It is with deep sadness that we announce the sudden passing of Douglas Alexander Gullett on June 11, 2020 in his 74th year.  Son of the late Robert and Christina Gullett (Thorold).  Doug is survived by his loving wife of 50 years Betty (Hicks), his daughters Kristen (Donna Douglas) and Rebecca and his son Jason.  He has four grandchildren who were deeply cherished, Brynn and Cameron Varcoe and Douglas and Alexandra Gullett.
Doug was a construction manager for Consumers Gas, and while working full time completed his Bachelor of Arts degree from Brock University in 1980.  He and his family were transferred to Barrie in 1981 and he was Construction Manager over Georgian Bay area.  Doug was owner and operator of a construction company from 1985 until 2000 and completed international projects in United States and Iceland as well as multiple projects in Ontario.  During that time, he won national and local awards for his commercial construction projects.  He served as President of the Canadian Farm Builders Association 1997/ 1998 and President of the Barrie Construction Association in 1998.  Doug was invited to join Jean Chretien in 1997 and 1999 on Team Canada Trade Missions to Korea, Philippines and Thailand and Japan respectively.   He supported his community through work with The Rotary Club of Barrie and the Shriners.
Doug was still very active owning and operating Northwinds Farm in Dalston and prided himself on producing and selling farm fresh produce at his Farm Gate Store located on the farm.
The family would like to thank the Doctors and staff in the I.C.U and the Royal Victoria Hospital.  In lieu of flowers a donation to the Canadian Heart and Stroke Foundation would be appreciated by the family.
We will come together to celebrate his life with family and friends at a later date.