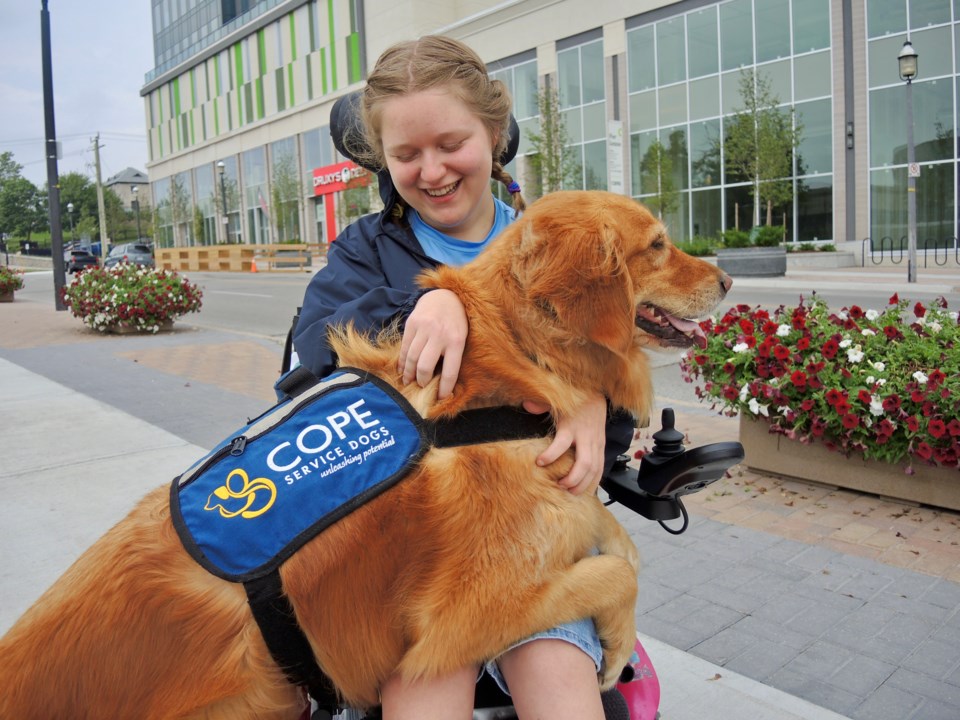 Shelby Cookson and her eight-year-old retriever Big Mac are inseparable.

But the relationship goes beyong the usual love between master and man's best friend.

Cookson and Big Mac have been together since he was two and the large, copper-coloured animal's gentle, guiding presence changed Cookson's life.

The 21-year-old Barrie woman has cerebral palsy with global developmental delay and won't be able to live independently.

But with Big Mac by her side, Cookson was able to move into a group home

"He gave me confidence to be on my own," said Shelby at a recent flag raising to mark International Assistance Dog Week.

"Mac helped me move.  He's always there for me. He picks up things when I drop them.  He opens doors. He's my best friend."

Cookson lives in a Simcoe Community Services group home - one of four residents - and Big Mac is the first service dog at one of the homes.

"He's a bit of a trail blazer," said Cookson's mom Connie who had been caring for Shelby by herself and found it was getting too difficult.

"He's given her confidence and the ability to speak up and advocate for herself. So that was a big part of our decision when it came time for her to move," said Connie who attended the city hall event with service-dog-in-training Beacon.

"Honestly without the support of the dog Big Mac it wouldn't have been possible. She used to be the little mouse in the corner that didn't say very much.  Learning to command him and sort of operate him as the piece of equipment, really, that he is for her besides being her best friend, it's given her the confidence and ability to advocate and speak up for herself for her needs."

Shelby can now direct her own care which is a relief to her mother and helped ease the transition of Shelby moving out.

Connie is fostering Beacon, one of seven pups behind a COPE fundraiser called 'Dollar A Day' in order to raise funds to complete the dogs' training and help the charitable organization through a rough financial patch.

"Knowing what it can do for somebody makes it really worthwhile and to be part of this organization has helped me too with the transition of Shelby moving out," explains Connie.

"It's given me a focus and a purpose and paying it forward a little bit. Because it really changed her life and our whole family's life. I'm really grateful to the whole organization."

Big Mac's protective personailty helps Shelby when she's out but the beautiful dog is also an ice breaker to make connections with people who want to pet him. (He's apparently an 'attention hog' according to Connie.)

Shelby has a boyfriend and with Big Mac she has mustered the courage to even ride the bus by herself.

"I love him," she said of her service dog.

To learn more about COPE or donate to the not-for-profit organization visit COPE Service Dogs: Home