Reduce, reuse, recycle, but who pays? Focus shifts to producers

County of Simcoe, Barrie and Orillia consulted on new report submitted to province this week that advances goal of having producers pay 100 per cent of recycling costs province-wide
Jul 23, 2019 4:00 PM By: Jessica Owen 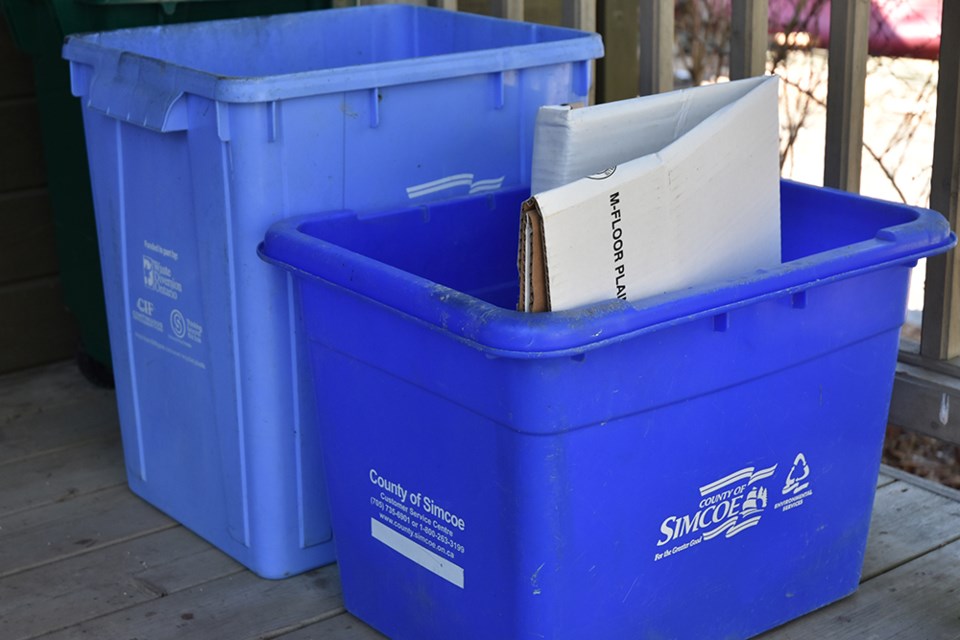 If the Blue Box Program is modified to force producers to pay 100 per cent of the costs of recycling in Ontario, you could see a reduction on your tax bill.

Another step in the process that could see that idea come to fruition was taken this week, when special advisor David Lindsay presented his report on recycling to the Ontario government, a mere six weeks after it was announced he would be taking on the project.

The County of Simcoe and the seperated cities of Barrie and Orillia were all consulted for the report.

“It was a very quick process, that’s for sure,” said Wilma Bureau, the county's collections and contracts supervisor. “It’s been going on for years and years where (governments) have tried to get it through. This is the furthest we’ve gone so far, so hopefully we’ll see something (happen).”

At the heart of the legislation was the idea that producers should be responsible for the end-of-life management of their products and packaging.

“This (consultation) is part of that process,” said Bureau.

Minister of the Environment, Conservation and Parks Jeff Yurek set out the province’s motivations behind hiring Lindsay to look into the problem now in a news release sent out on Monday.

“It's clear that Ontario's current Blue Box Program is unsustainable. Recycling rates have been stalled for 15 years and up to 30 per cent of what is put into blue boxes is sent to landfill,” Yurek said in the release.

“Over 240 municipalities have their own separate lists of accepted recyclable materials, which affects cost savings and contamination, and program costs are expected to increase by approximately $10 million per year after 2019,” he added. “There is also the serious problem of plastic pollution and litter increasingly plaguing our parks, roads and waterways.”

Under the current Blue Box Program, producers are responsible for shouldering about half the cost of recycling across the province.

According to the release, the province’s goal is to make producers 100 per cent responsible for managing the plastic and other packaging they produce.

“Not even just for the blue box program, but for a bunch of different materials, such as tires, electronics and hazardous waste,” said Bureau.

Currently, Bureau said there is a shared responsibility program in place for blue box materials, and this system has been in place for years.

“The county receives partial funding for the Blue Box Program (from the producers of printed paper and packaging), but the county doesn’t receive the full cost. It varies from year to year, but it’s generally about 50 per cent, or a little less,” she said.

Bureau said municipalities have been lobbying for a long time for the producers of packaging to take on more of the costs associated with recycling the materials.

Municipalities across Ontario are currently paying about $130 million per year for blue box recycling; that comes directly from the taxpayers' pockets.

If producers take on 100 per cent of the cost of the blue bin program, that would translate to the taxpayer seeing a reduction in their taxes, although Bureau is quick to clarify that how the cost savings would shake down is still up in the air.

“Theoretically, that’s the idea,” she said. “It’s a pretty substantial amount of money, and if residents weren’t paying for it, there should be some reduction or the funds would be used in a different way to upgrade other programs.”

Emma Sharpe, communications advisor with the City of Barrie, said city environmental services staff were consulted during the process.

“Barrie did participate in a municipal stakeholder consultation webinar held by David Lindsay’s office,” said Sharpe. “The Association of Municipalities of Ontario (AMO) has been providing feedback on behalf of all Ontario Municipalities on this discussion paper so feedback would have been co-ordinated through them.”

The City of Orillia was also invited to participate, however Greg Preston, manager of water and waste management with the city, said scheduling didn’t quite sync up this time around.

“The city didn’t provide direct feedback... but our two staff that attended the AMO (Association of Municipalities of Ontario conference)... really pushed the municipal file there and our position on the Blue Box issue,” said Preston. “I don’t feel we haven’t been heard.”

Preston said the city staff position is in-line with that of the County of Simcoe, where they would also like to see producers take on 100 per cent of the cost of recycling.

“We’re excited to see this file move forward,” he added.

Preston said it makes sense for producers to be responsible for the entire life cycle of the packaging they create.

“The benefit would be the cost of recovering these items and recycling them would not be covered by the property taxpayer. It would be something producers would have to cover one way or another, and presumably, they would look to design the most efficient system they could to collect that material,” he said. “The burden of cost would be off the taxpayer.”

Another benefit would be that if the producers paid, there would be a standardized list of accepted materials province-wide.

“Then it wouldn’t matter if you lived in Barrie, Orillia, Bradford or London, you’d be putting out the same blue-box materials,” he added.

Bradford mother donates stem cells to help save daughter's life
Aug 14, 2020 7:30 AM
Comments
We welcome your feedback and encourage you to share your thoughts. We ask that you be respectful of others and their points of view, refrain from personal attacks and stay on topic. To learn about our commenting policies and how we moderate, please read our Community Guidelines.