'I don’t think (the demonstration) represents small-town at all. I think we’re better than that': Fierté Simcoe Pride president
Jun 15, 2018 3:00 PM By: Jessica Owen 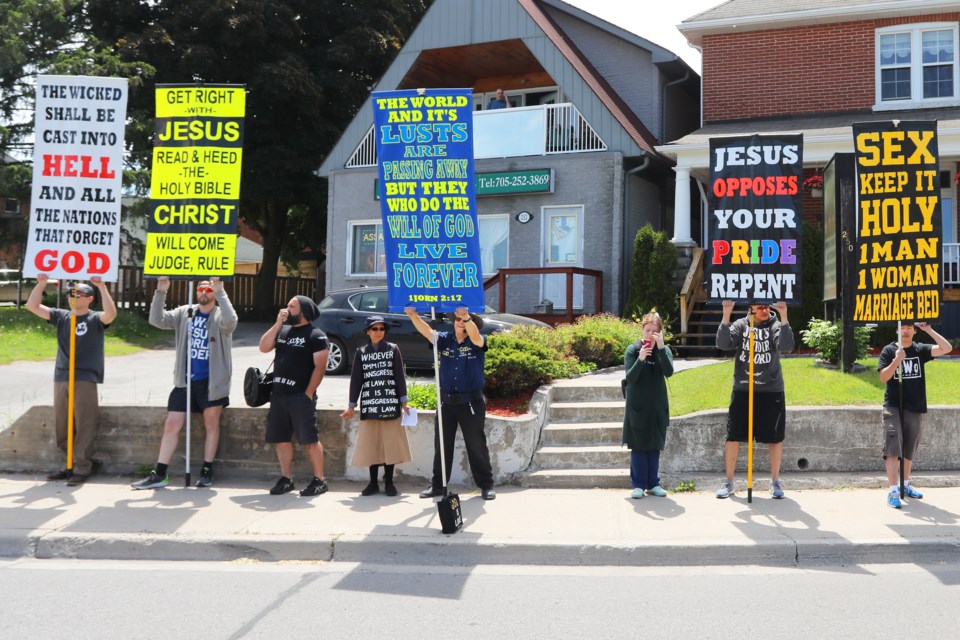 Religious protesters hold signs and berate marchers with a loudspeaker along the route during the annual Barrie Pride Parade that took place along Bradford and Simcoe streets on Sunday, June 10, 2018. Kevin Lamb for BarrieToday.

On June 10 in Barrie, a group of anti-gay protesters targeted the Barrie Pride Parade.

According to a release put out by Fierté Canada Pride on Thursday, they have determined that the protester group is part of a co-ordinated effort and many of the leaders of the groups have come from the U.S.

“Pride is a celebration of decades of progress toward LGBTQ rights and a public statement of our right to live and love freely in Canadian society. The attempts of these agitators to intimidate our community – one that is among the most targeted for discrimination and violence – is contemptible,” said Heather Hay, President of Fierté Canada Pride in the release.

On May 26, a group of anti-gay protesters also disrupted the local annual Pride festival in Dunnville, Haldimand-Norfolk County. The day after the event, the anti-gay group also violently targeted one of the Pride organizers in their home. According to the release, there is evidence that these groups are connected and may be planning to protest at other small town and rural Pride events across Ontario this summer.

Fierté Canada Pride has indicated they are raising these concerns with provincial and federal authorities.

The attack on Barrie Pride isn’t the only negative attention being given to the local LGBTQ community recently.

Last week during the kick off to Pride Week, Barrie-Innisfil MP John Brassard posted a photo of the flag raising at Barrie city hall on his Facebook page.

What followed was an onslaught of negativity from commenters that turned so sour, Brassard felt compelled to respond.

“My staff and I have seen the comments. It's worthy to note that most, if not all, of the disrespectful comments are from non-Barrie-Innisfil residents. I have family members, staff, and good friends who are part of the LGBTQ community. Barrie-Innisfil residents respect individual rights and freedoms and I am proud to represent them and will always stand up for the people I love regardless of who they love. I believe in free speech but I don't believe in hate no matter how it's manufactured,” Brassard wrote.

When reached for comment on Wednesday, Brassard elaborated further.

“Everybody’s got a right to peaceful protest, but when you start pushing up to the line of hate speech, I think as a community we should be concerned about that,” says Brassard. “I would like to see a little more respect and decorum than I saw in those photos.”

Brassard has been an advocate for many pieces of legislation supporting LGBTQ people, including supporting Bill C-16. More recently, he supported legislation put forward by MP Michelle Rempel on Tuesday to continue the Refugee Rainbow Assistance Program which helps persecuted LGBTQ people from foreign countries, however it didn’t pass.

Brandon Rhéal Amyot, president of Fierté Simcoe Pride, indicated this week that Brassard has always been a huge supporter of the LGBTQ community.

“John has done the right thing by not feeding into these people... he’s demonstrated leadership in that aspect,” said Amyot. “A lot of these are very targeted attempts at our community but again, after doing some digging, the comments seem to come from people not only outside Barrie-Innisfil, but outside Simcoe County.”

Amyot has their own methods of dealing with negativity against the LGBTQ community.

“We get so many comments and emails that I tend to ignore them. That’s the best option... to not feed the fire,” says Amyot. “We have had protesters at past events in Simcoe County -- one or two at a flag raising – but usually they’re far less vocal.”

Amyot suspects that this group is taking the time to target smaller-town Pride events so they can get more attention. He was proud of the way marchers in Barrie chose to deal with the negativity: by sending back positivity.

“I don’t think this group is representative of Simcoe County and Barrie. We reacted with kindness. Our people were shaking hands, offering candy and kissing. The protesters kept their distance,” says Amyot.

“I think our communities are far more open... I think people here are much more open to learning. I don’t think (the demonstration) represents small-town at all. I think we’re better than that,” says Amyot.

Multiple calls for requests for comment to the organizers of Barrie Pride were not returned.