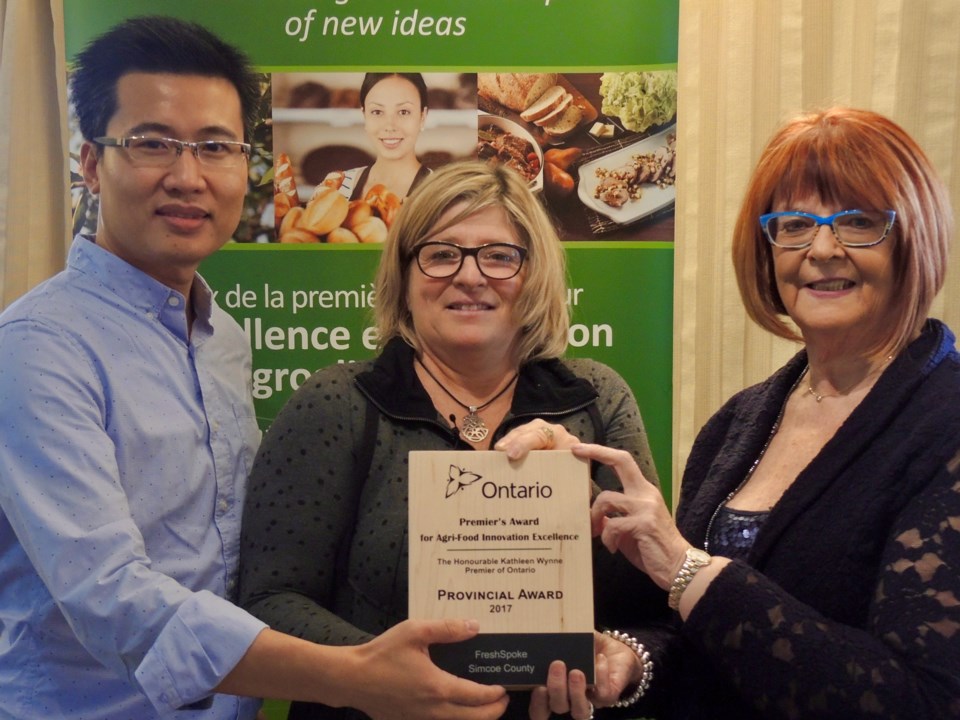 Award winners for top local agri-food innovators Simcoe County were announced Friday in Barrie and a local company took home some hardware - or in this case a plaque crafted from wood.

"We have a lot to be proud of here in Ontario. Our agri-food innovators are contributing to a sector that generates more than $37 billion towards our GDP and employs more than 800,000 Ontarians," said Hoggarth.

"With their bright ideas and innovative approaches these individuals are developing leading solutions and creating new businesses and technologies."

The FreshSpoke app, released in 2016, connects buyers and sellers for wholesale buyers to get food directly from local producers and processors.

It's described as an eBay-meets-Uber approach applied to local food.

"When I started exploring this notion of technology that it could be used to put more local food in the hands of consumers in Ontario there was no sharing economy. There was no Uber and there was no Henry," said FreshSpoke CEO Marcia Woods, referring to CTI Henry Quach.

FreshSpoke has over 1,000 local food products on the platform and we've barely scratched the surface, Woods said.

"The timing is certainly right for FreshSpoke," she said, adding that the other award winner is on the FreshSpoke app.

Johnston's Cranberry Marsh and Muskoka Lakes Winery based in Bala was the second area recipient of the Premier's Award.

Owners Wendy and Murray Johnston are currently in Washington State looking into furthering their business.

"That is wonderful news and we thank them very much for their creativity and innovation," said Hoggarth.

This year, 50 innovators are receiving regional awards.  They're also eligible for the Premier's Award, Minister's Award and three Leaders In Innovation awards which will be announced in December.