Ministry funding public board's No. 1 and No. 10 priorities; 'Our position as a board has not changed ... There were nine priorities ahead of it,' board chair says of Shanty Bay project
Jul 27, 2020 7:00 PM By: Jessica Owen 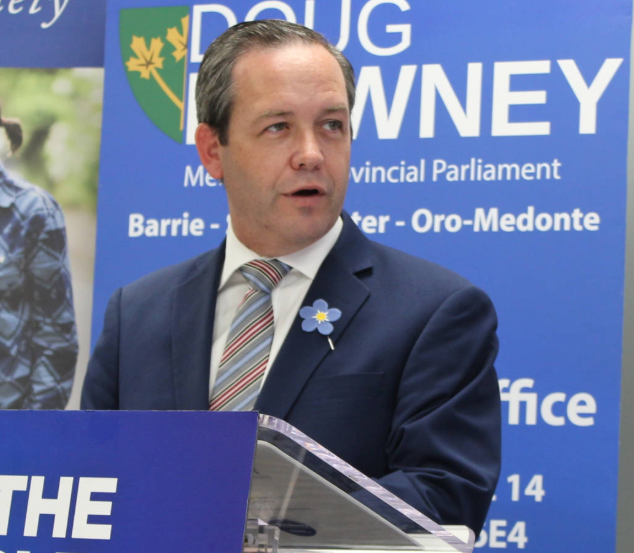 Attorney General Doug Downey, who is also the MPP for Barrie-Springwater-Oro-Medonte, is shown in this file photo making an announcement in Barrie. Raymond Bowe/BarrieToday

Last week, the province selected the lowest ranked of the Simcoe County District School Board’s capital priorities, and announced a new school for Shanty Bay despite the board’s prior concerns.

According to the province's minister of education, advocacy by the area’s MPP played a role in the decision.

On Thursday, the Ministry of Education announced $500 million in funding to build 30 new schools in Ontario and upgrade 15 others, as well as creating nearly 900 new licensed child-care spaces.

Locally, the government announced $13.5 million for a new 593-pupil elementary school in south Bradford West Gwillimbury. Also announced was a new facility to replace Shanty Bay Public School, which has 190 students, at a cost of $5.9 million.

The province also gave the Simcoe Muskoka Catholic District School Board approval to proceed with the tender for a new elementary school in Innisfil, which will include child-care rooms.

Simcoe County District School Board trustees reluctantly voted last September to include a new Shanty Bay school among the 10 capital projects it submitted to the province for approval.

“Our position as a board has not changed. We felt it was a 10th priority. There were nine priorities ahead of it. But the government chose to fund it,” said Jodi Lloyd, trustee for Orillia and board chair for the SCDSB.

When asked why the Shanty Bay school was chosen when it was ranked 10th on the public board’s list of priorities, Minister of Education Stephen Lecce acknowledged that Attorney General Doug Downey, who is also the MPP for Barrie-Springwater-Oro-Medonte, had a hand in bringing it to his attention.

“The community has long advocated for this project and MPP Downey worked hard to ensure it received the attention it deserved. At MPP Downey’s request, I met with parents and council members who want to see local, quality, and modern school facilities built within their growing community,” said Lecce. “We are proud to support projects that will make a difference in rural communities across the province, especially in Shanty Bay.”

Downey said it’s his job to advocate for local needs, but that he didn’t have a say in the final decision the ministry made.

“The local MPP is more finely attuned to what’s happening in that region,” said Downey. “It was no more than me highlighting what I thought was important, and then the ministry did what it does. I didn’t have line of sight to their decision-making beyond that. I didn’t have any input directly with the ministry. I’m not at that table.

“I’m a local advocate. It’s up to me to say what I think is important, and then they take that into consideration,” he added.

At a meeting in September 2019 to finalize the priority list before sending it to the ministry, trustees shared concerns about adding the Shanty Bay school to the list.

A pair of Oro-Medonte residents – Alastair Connolly and Sue Harrison – made an impassioned plea to trustees urging them to demolish Shanty Bay Public School and construct a larger facility on the site.

But in their submission to the board, they dropped a bit of a bombshell when they revealed they met with Lecce at his King City office. Downey, Oro-Medonte Township Mayor Harry Hughes and Ward 3 Coun. Cathy Keane also attended the meeting “in support” of a new Shanty Bay school.

“I’m quite concerned by the fact this meeting took place without the courtesy of an invitation to the school board that actually makes these decisions,” Lloyd said at the time.

She said the process should not be politicized; decisions should be based on the merits of the business cases presented. It “calls into question the integrity of the process,” she stressed.

To read our full story on that meeting and concerns trustees had at the time about adding the Shanty Bay school to the list of capital priorities, click here.

“We’re very grateful for the funding announcement for the school in Bradford,” Lloyd said Monday. “Those capital priorities went in at the end of August last year and it’s taken a year to get that capital money released. We’ve gone three years with no capital investments in schools in our board, that is growing.

“We were desperate, specifically in the Bradford area. This is good news for that community,” she added.

Lloyd says it can be difficult because the board is playing “catch-up” all the time with the rapid growth in the south part of the county. The board gets about $6 million to make all school repairs across the county annually.

“It’s not nearly enough money. We know that. We have massive annual renewal needs,” she said. “Now we need to know, when is the next call for capital priorities? Because, if it takes us another year, it’s a significant delay.”

According to a report by the Ontario’s Auditor-General in November 2019, Ontario’s school repair backlog currently has a price tag of $16.3 billion.

The news release from the province last week indicated they anticipate the new schools will open in September 2023.

- With files from Dave Dawson

Sparks fly as trustees include new Shanty Bay school among its 10 priority projects
Sep 6, 2019 1:30 PM
Comments
We welcome your feedback and encourage you to share your thoughts. We ask that you be respectful of others and their points of view, refrain from personal attacks and stay on topic. To learn about our commenting policies and how we moderate, please read our Community Guidelines.