Although public health officials don't expect to meet the provincial deadline, they're forging ahead with the application and public consultations
Mar 6, 2019 1:45 PM By: Raymond Bowe 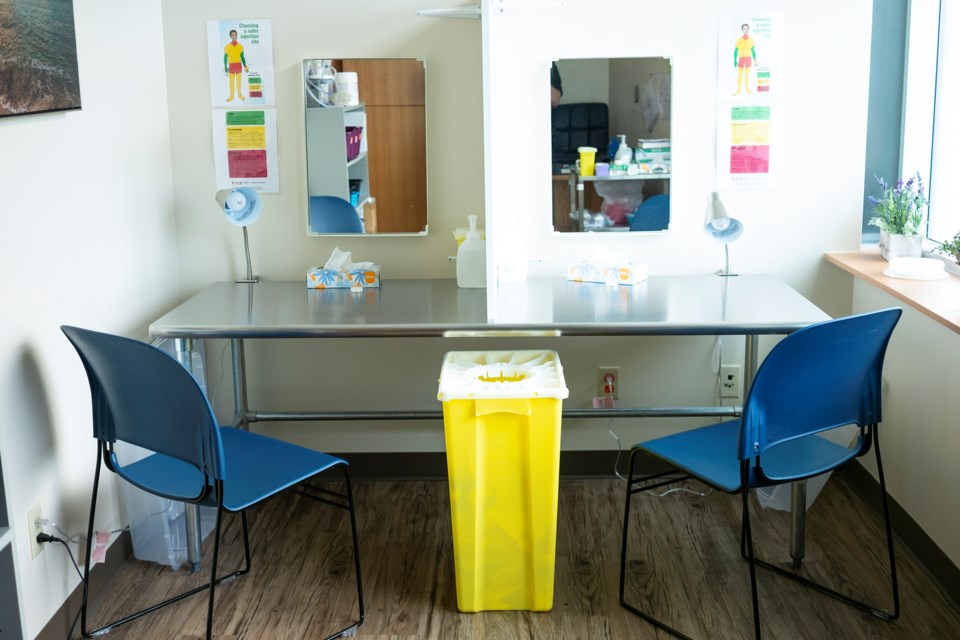 This photo from GuelphToday shows a room used at the Overdose Prevention Site in the Guelph Community Health Centre. Kenneth Armstrong/GuelphToday

Although local public-health officials have been working "expeditiously" toward bringing a Consumption and Treatment Services (CTS) facility to Barrie, they expect to miss the province's loose deadline.

The province has asked that CTS applications be submitted “well before April,” said Dr. Lisa Simon, associate medical officer of health with the Simcoe Muskoka District Health Unit, which is one of the agencies behind the local proposal.

At Monday night's city council meeting, she said it was more of an "encouragement" than a firm deadline.

"If we can make April, we would, but we simply cannot do the consultations we’re doing and get it in April, so we are making the choice to submit late but as soon as possible to April as we can," she said.

Simon there has been no mention from the province that the deadline would be extended, nor has there been a “hard cut-off."

"We’ve kept them informed of our process and we will have to see how things proceed," she said.

Coun. Doug Shipley also asked whether local MPPs are aware of the timeline around the provincial application.

“I would say that our communications have been received,” Simon said succinctly and without expanding further.

Coun. Mike McCann called it “ridiculous for the provincial government to be so aloof (on the timeline). That’s not acceptable. … It’s very frustrating and I take this very seriously.”

Barrie has the third worst opioid problem in the province for cities with more than 100,000 people.

In 2017, there were 78 overdose deaths in Simcoe Muskoka, including 36 in Barrie.

This has led to the pursuit of a CTS facility in the city, which is being spearheaded by the health unit, the Gilbert Centre and the Canadian Mental Health Association (CMHA).

Health officials are soldiering on through consultations in the meantime.

“We haven’t been told ‘stop, if you’re not getting it in by April,’ so we haven’t,” Simon said. “I know there’s some frustration, and clearly we share that, but it hasn’t been explicit enough that we’ve lost hope to spend the time pursuing this application."

The guidelines for the CTS applications were released at the end of October, with requirements for “extensive community consultation,” Simon said, which took them into new year once all of the data was gathered.

“In our minds, we’ve expedited this as much as we can,” she said. “We certainly know other communities who have said there is no way (they) can do this and are doing a process that’s going to take one or two years to consult and pull together information."

Either way, health officials still have an interest in pursuing an application at the federal level, she said, so they are benefits to completing the public consultations.

“To apply provincially, you also have to apply federally because it’s the federal government that provides the exemption under the Controlled Drugs and Substances Act,” Simon said.

Public consultations are ongoing around the provincial application for a CTS facility, including a drop-in meeting on Wednesday, March 20 from 4-8 p.m. at Barrie City Hall.

The consultation report is expected in the spring, as well as other aspects related to the application, including a potential site plan, which would then be brought back to council for its endorsement.

Municipal approval is expected to weigh heavily in the province’s decision, Simon said, but the federal application could still be pursued. If council chose not to endorse the provincial application, however, she said it would make their chances “very slim” at the federal level.

“They look for some sense of municipal support in a vague way,” Simon said. “I couldn’t say what that is. It’s not an explicit black and white criteria on their application in the same way that it is provincially. I don’t imagine the federal government would want to move forward with a site that was wholeheartedly opposed by a municipal council.”

Last summer, the health unit released its Simcoe Muskoka Opioid Strategy (SMOS), which is a multi-pronged approach to address to the local drug issue, including harm reduction such as needle exchanges, supervised consumption sites and naloxone distribution. A one-year SMOS report is also expected in the spring.

An application was previously made to the province for an overdose prevention site (OPS) in Barrie, but it died when the Progressive Conservatives came to power last summer and overhauled the criteria, including more emphasis on public input.

Simon hopes to be back in front of council in May with more information.