Built in 1868, the church is not currently on the Municipal Register of Cultural Heritage Properties
Dec 17, 2020 9:00 AM By: Jessica Owen 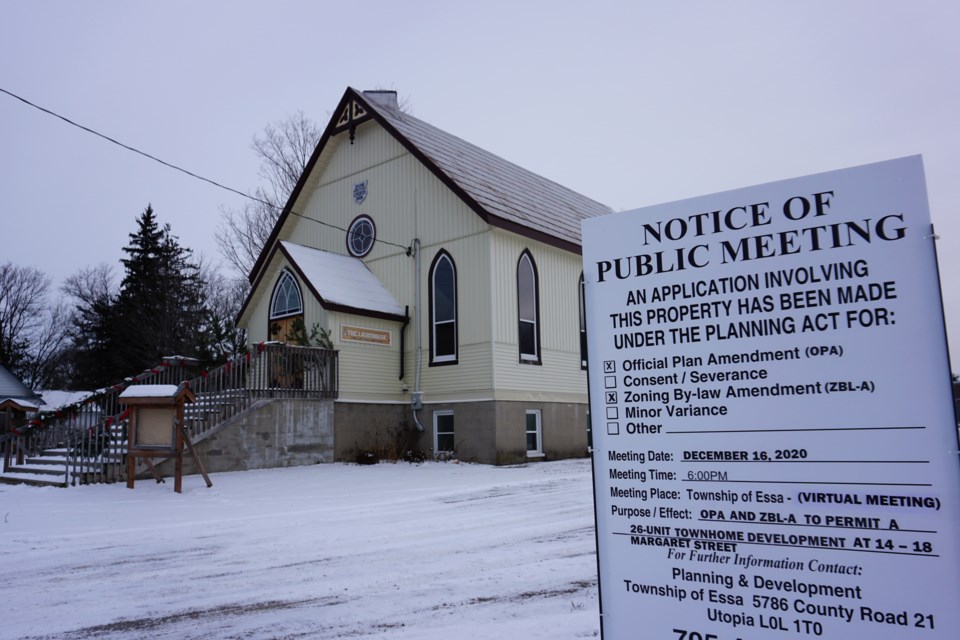 The Zion Presbyterian Church, located on Margaret Street in Angus, was built in 1868. Jessica Owen/BarrieToday

A little church on a side street in Angus is causing a stir this week, with a small community banding together to try to prevent its demolition.

The Zion Presbyterian Church, built in 1868, is being considered for demolition pending the consideration of a new proposal to build 26 townhouses at 14 and 18 Margaret St.

However, a new petition to halt the development has garnered nearly 800 signatures over the past week and residents are rallying to try to preserve what they say is a significant part of Angus’s heritage.

According to the Change.org petition, which was started by a group called We The People of Essa, the group would like to see the church preserved and used for the community, serving future generations as an arts and cultural space. Over the years, the church has served as a place for many family funerals, weddings and baptisms.

“I'm signing this because this church is a part of Angus history. It's stood proudly for... years; why knock it down and put townhouses? It’s a poor use of that land, not to mention (would) ruin that side of town,” wrote Jessica Collins as a signer of the petition.

“It breaks my heart to see historic buildings torn down to build housing. This is part of our heritage and history,” wrote Dawn Young.

The church is currently being used by a community group called The Lighthouse and hosts yoga, music, and children’s programming.

A proposal and concept plan was recently put forward by Wynstar Developments Inc., to build 26 townhouse units on the two lots. The developer purchased the land in April 2019.

The property at 14 Margaret St., which is home to the church and parking lot, is zoned institutional. The land at 18 Margaret, which is vacant aside from a small shed and more parking space, is zoned low-density residential.

For the proposal to proceed, both lots would need to be rezoned as high-density residential with special provisions for apartments.

Aimee Powell is the manager of planning and development with the township. According to Powell, the public meeting on Wednesday night served as Essa Township council’s formal introduction to the project. Comments from the public were accepted during Wednesday’s meeting.

“We are going to intake all the information concerning comments on the subject applications, and (will be) providing a report to council with the planning department’s recommendations in the new year,” Powell told BarrieToday. “These applications are sensitive in nature.”

Powell confirmed the township was in receipt of the petition.

The province identifies parameters in the Ontario Heritage Act for the protection of properties with cultural heritage value. The purpose is to have built, natural and cultural heritage features identified and protected when listed by the municipality.

“The challenge with that piece is... the township would have to list or designate this church in order for it to be protected by the province to safeguard it against demolition,” said Powell. “That was not done. So the church, although it has heritage value among community members, it is not recognized by the province as being protected.”

The challenge for the township is if it were to deny the proposal based on the cultural significance of the church, the applicant would have grounds to appeal as the church is not recognized as being historically significant by the province.

“We understand the concerns of the community,” said Powell. “We are still at the stage where we are taking in all comments concerning the subject applications.”

The township will be accepting comments from the public until Jan. 29, 2021, and can be emailed to apowell@essatownship.on.ca.