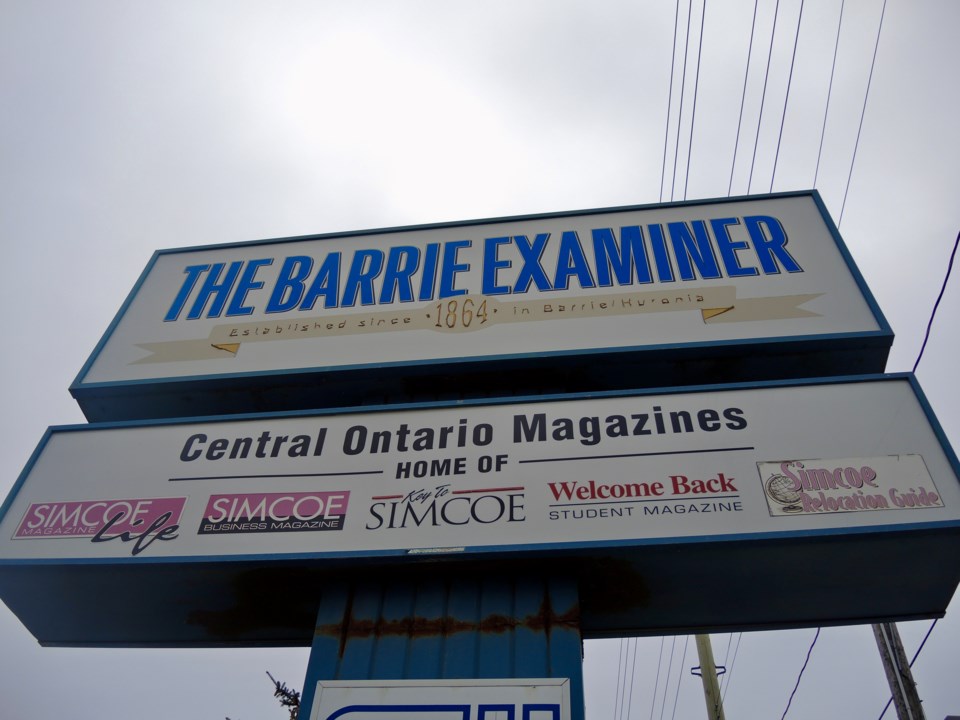 The Barrie Examiner sign on Bayfield St. on Nov. 27, 2017, the day the publication closed. Sue Sgambati/BarrieToday

Sixteen employees at the Barrie Examiner lost their jobs and 11 more people at the Orillia Packet and Times are out of work in a mega-newspaper swap between Torstar Corp. and Postmedia Network Inc.

Employees were told at 9 a.m. Monday that the long-time daily publications in Barrie and Orillia, along with counterpart Northumberland Today were shutting down effective immediately.

The closure of the publications in Simcoe County and others across the chain affect a total of 46 full-time and part-time employees.

"It's a sad day for everybody at the papers in Simcoe County. I myself had been with the Packet and Times for just over ten years and I loved what I did and so did everybody else. We cared a lot about what we did and I feel really badly for those who don't have a job anymore," said Nathan Taylor, who was regional editor to the Simcoe County publications that closed.

"I am officially unemployed for the first time. It's a sad day for the media business, democracy, our community and my family. I had been at The Packet since 1991," tweeted Dave Dawson of the Packet and Times.

The Examiner was founded in 1864 and the Packet and Times had been publishing in Orillia since 1870.

"The employees were notified this morning. That was done in person. We had people at the Barrie Examiner and the Orillia Packet and Times. They were notified late last week to be there for a meeting this morning at 9 a.m.," said Bob Hepburn, director of community relations and communications at the Toronto Star.

The news was met initially with disbelief by many but shock by all.

"I am deeply saddened by the news of the closure today of the Barrie Examiner," said Barrie Mayor Jeff Lehman.

"For more than one hundred and fifty years, and through the past many decades as Barrie’s daily newspaper, the Examiner has been a trusted news source that played a critical role in our community, our economy, and our democracy," Lehman said.

Lehman said he had the pleasure of working with many of the Examiner’s journalists, editors, and staff over the years and noted how they cared deeply about our community.

The Mayor also said their integrity showed in their work, 'bringing always accurate, sometimes critical, and often prescient reporting and commentary to the residents of Barrie and the area.'

"My heart goes out to the people who work there, who saw the best and worst of our community over the years but still love it as much as I do.  It is very hard to imagine Barrie without the Examiner," said Lehman.

"My reaction is shock and sadness. I know that the business that you're involved in has evolved or devolved over the last number of years. But still when you hear news like this, it's a sad story," Clarke told BarrieToday in an interview.

"I've known many people from over the years. My heart goes out to them. It's also sad for democracy."

On the streets of downtown Barrie, the news of the Examiner closing was a bombshell.

"It's shocking. We've been here since 1968 and the Examiner has always been our go-to source for local news. I do get some of my news online but I still read a hard copy newspaper. And not everybody is online. What are those people going to do. It's just really sad. I feel terrible," said Tracey Baker.

But for Denise Tucker, a former advertising director at the Examiner, the mothballing of the iconic local paper was not surprising.

"A lot of people at the Barrie Examiner lost their jobs this morning. Merry Christmas," said Tucker.

"It's too bad for all of those people who've been working there. some of them for a lot of years are now at the end of their careers in the newspaper industry and in the media industry probably. Great people. Really passionate about reporting and this city."

The employees will receive severance packages.

Antiques After Dark a 'magical' fundraiser in Cookstown
Jan 19, 2020 7:00 PM
Comments
We welcome your feedback and encourage you to share your thoughts on this story. We ask that you be respectful of others and their points of view, refrain from personal attacks and stay on topic. To learn about our commenting policies and how we moderate, please read our Community Guidelines.