Can councillors rely on MPPs if an opioid emergency is declared?

Barrie-Springwater-Oro-Medonte MPP Doug Downey tells BarrieToday he's not ready to back such a measure just yet
Feb 26, 2019 7:00 PM By: Raymond Bowe 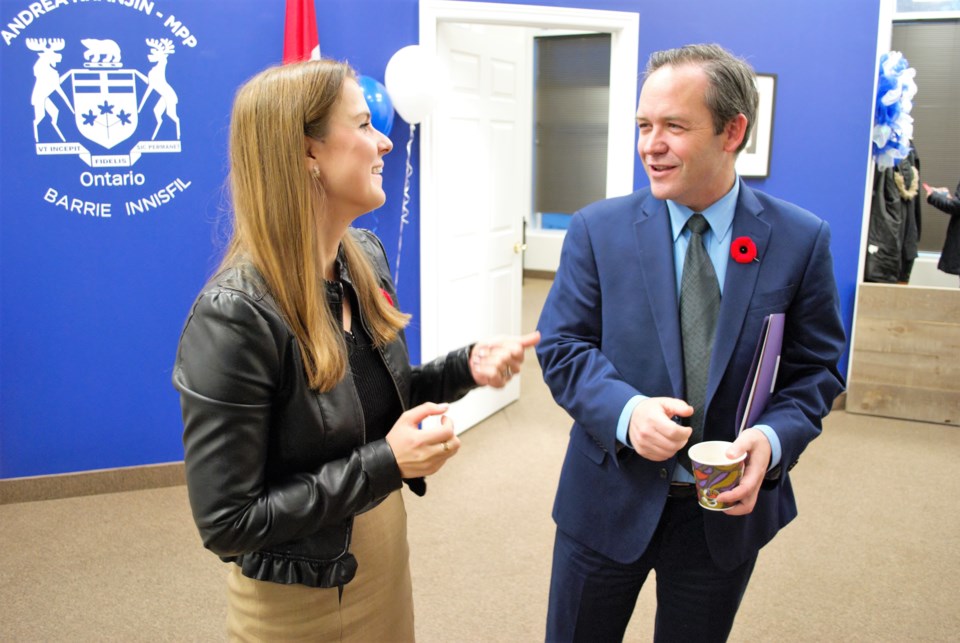 If the city ends up declaring a public health emergency to fight the local opioid epidemic, councillors would like to know if they have support from Barrie's two MPPs.

It's ultimately up to the province to decide what constitutes an emergency, but councillors say it would be nice to have Progressive Conservative MPPs Doug Downey (Barrie-Springwater-Oro-Medonte) and Andrea Khanjin (Barrie-Innisfil) in their corner.

"If our MPPs aren't on board, it just dies," Coun. Jim Harris said Monday night.

A motion tabled by Couns. Natalie Harris and Keenan Aylwin at Monday night's general committee could, if passed at an upcoming council meeting, trigger funding for front-line work such as treatment, prevention, education and harm reduction.

But councillors haven't made that leap just yet.

In the meantime, they've asked for more information about the ramifications of calling an emergency, a measure more often used in matters of natural disasters than a drug epidemic. However, it's not unheard of, either. British Columbia declared an opioid-related public health emergency in Vancouver a few years ago, but death rates continued to rise.

Officials from the Simcoe Muskoka District Health Unit, which last year unveiled their Simcoe Muskoka Opioid Strategy (SMOS), are also scheduled to speak at Barrie city council next Monday. Councillors hope to glean more information from the health unit's delegation, including medical officer of health Dr. Charles Gardner, that could help them decide how to proceed.

Just over a week ago, Downey says he and Khanjin were asked for their position on the opioid issue ahead of Monday's debate around possibly declaring a public health emergency.

But Downey says he's not ready to commit to backing the city quite yet.

"It hasn't really given us enough time to take a position," Downey told BarrieToday during a phone interview Tuesday afternoon. "We will eventually take a position on it, but I want to be in co-ordination with the government's position."

When that could happen remains to be seen.

"We just unrolled our health policy today, so that's obviously a consuming thing for that department," said Downey, adding the MPPs also want to do their due diligence before taking a firm stance.

Khanjin was unavailable for comment this afternoon because she was tied up in meetings.

With the province taking the lead on health-care matters and the PCs bringing sweeping changes to the Ministry of Health and Long-Term Care, it was mentioned around the council table Monday night that one notable absence in the information package was a stance from Khanjin and Downey, who are both members of the sitting government.

"The province has the primary responsibility for health care, they are giving the dollars that should be being spent on the overdose crisis in Barrie," Mayor Jeff Lehman said at the meeting. "We do need those two MPPs to be fierce advocates."

Barrie's opioid problem is among the worst in the province. In 2017, there were 81 opioid-related deaths in Simcoe Muskoka, including 36 in Barrie.

There was also a recent spike in overdoses seen at Royal Victoria Regional Health Centre. In the first 10 days of February, there were 28 visits to the Barrie hospital’s emergency department for suspected overdoses, roughly twice the recent average locally.

An application is also being prepared for provincial review with the prospect of opening a Consumption and Treatment Services (CTS) facility in Barrie. That application is being led by the the Gilbert Centre, the Simcoe Muskoka District Health Unit and the Canadian Mental Health Association (CMHA).

Downey said he's "deep into the opioid file," including meetings with local officials at the centre of the issue and behind the application, which is currently the subject of public consultations.

"When I've been meeting with the Gilbert Centre and the people who are out doing consultations, I've been really open about saying, 'Look, if I can open doors', help get information, encourage them to get their application in, that sort of stuff, for the CTS...," he said. "But I honestly don't want to give you a specific date, because I can't speak for when I'm going to get it crystallized."

There's also a consensus around the Barrie council table that the solution to the opioid problem is going to take a multi-layerered and co-ordinated approach.

"It's always a challenge, but we all are sort of at the table," Downey said. "We're all engaged in the discussion at the same time. We are all meeting with each other, together and separately.

"I think, when you're dealing with something like this, you can't let government boundaries deter you," added the MPP, whose riding includes downtown Barrie, which is Ground Zero for the local opioid crisis. "You have to work together and figure out what we can do in each area."

While a solution to the issue is the big question, Downey said there's an obvious need for it to be addressed.

"I think progress can be made and I think we can do better than we are," he said.

Matt Turner, harm reduction co-ordinator with the Gilbert Centre and who was in the gallery at Monday night's committee meeting at city hall, said he was pleased with how the discussion unfolded.

"I think it’s positive that a discussion took place, and look forward to hearing what will come out of it either way," Turner told BarrieToday. "Any council discussion on this issue is good to see, regardless of the outcome of the vote.

"Council has now brought discussion of the overdose crisis to a place where the city must and needs to respond if we expect other levels of government to also respond," Turner added. "Council needs to not just to acknowledge but to provide the resources in order to effectively respond (when it comes to) preventing opioid-related deaths."

Council not ready to declare opioids a public health emergency
Feb 26, 2019 7:30 AM
Comments