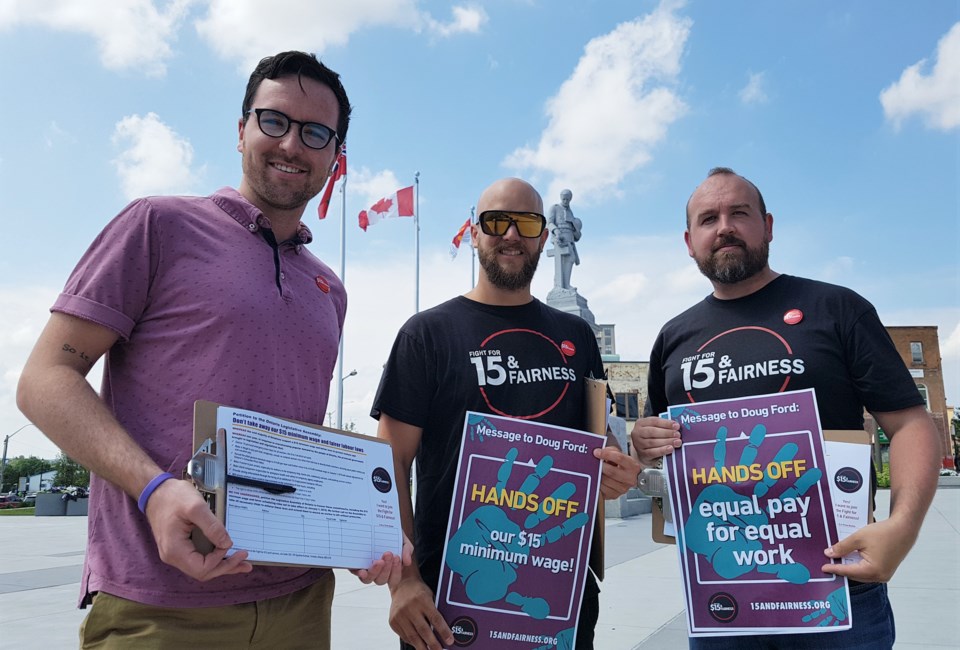 Politicians from three political parties have joined forces in the Fight for 15 and Fairness. From left: Keenan Aylwin, Dan Janssen and Michael Speers. Shawn Gibson/BarrieToday

Local politicians from three different parties met together at Meridian Square today before heading out to the massive crowds of Kempenfest to get signatures that will tell Ontario Premier Doug Ford they do not want his PC government to roll-back the $15 minimum wage.

The campaign, dubbed Fight For $15 and Fairness, is not just an action to keep the minimum wage the way it is, but also to improve the rules related to paid sick days, decent hours and a respectable workplace, say local politicians.

Keenan Aylwin (Green Party candidate), Dan Janssen (NDP candidate) and Michael Speers (former Liberal staffer) joined forces today to gather as many signatures as they can on a topic they all believe in.

Aylwin has long been an advocate for small businesses and those who make them work and feels that the Conservative government in power right now is doing a lot of talking but not acting in support of those who need it.

“We are going around with a petition in support of a $15 minimum wage but also in support of workers throughout the province who truly are under attack by the current provincial government,” said Aylwin.

“There were some struggles when the wages were increased but businesses are adjusting and I think they could handle a further increase as well, but they do need some support from the government; a government that says they support small business but aren’t doing much to do just that," he added.

The signatures will be collected and delivered to local MPPs Doug Downey and Andrea Khanjin in hopes that they will present the petition to the legislature.

As a member of the NDP and someone who is heavily involved with rights for workers, Janssen believes that many Ontarians feel the same as him: that it is important for everyone to be able to make their rent payments and afford the amenities that go with that.

Janssen doesn’t feel the trio will have a problem in spreading the word about their initiative nor in obtaining signatures.

“We’re going to try to get as many signatures as we can get but we’d be satisfied if we get a 100 or 150 today, which I don't think will be a problem due to the stats we’ve seen like a poll recently released that says 66% of Canadians believe that $15 minimum wage is a good thing,” said Janssen.

“This is really important and as someone who is personally involved with the labour movement, I see the benefit in the $15 and Fairness campaign in that it has become a movement and is gaining province wide support with every action and gathering," Janssen noted. "Today is a show of unity with members of three separate parties joining together not for personal gain, but for workers' gain.”

Speers has worked for the Liberal government, was employed by the Minister of Labour and is now a local advocate. He said that having been involved with the government who delivered the minimum wage increase, he knows how beneficial it is and he hopes that everyone will take a  look at the positive things involved and not get lost in the negative rhetoric by those opposed.

“With regards to the people of Barrie, there are a lot of progressive voices out there so when you have the three of us working together, it shows that you can put party allegiances aside and get work done in the community. We’ve done the homework and at the end of the day everyone in this province deserves a decent wage and it doesn’t have to be one way or the other. You can pay this increase and treat employees well and give them all the incentives they need to want to work for you; cutting through the garbage being said by those against this is why we’re out today and spreading the truth.”

For more information on the campaign head to the website at www.15andfairness.org