Soccer is the nation’s number one participation sport for kids and right now no one in the region is doing it better than the Barrie Soccer Club
Mar 30, 2017 8:00 AM By: Shawn Gibson 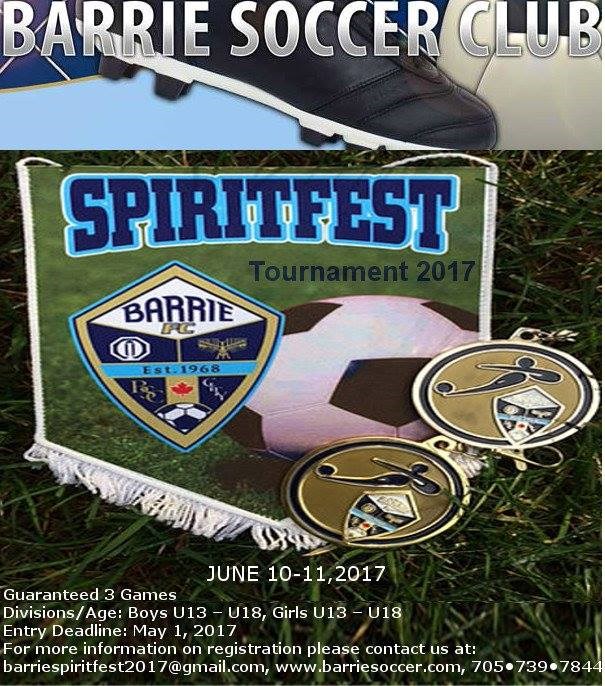 Soccer is the nation’s number one participation sport for kids and right now no one in the region is doing it better than the Barrie Soccer Club.

Having been in existence since 1968, the club has endured many changes in its 49 years. One of the more optimistic evolutions was the hiring in 2014 of current Technical Director Mark Cristante. The 45-year-old soccer expert has been involved with the game since he was seven years old and has even reached the level of professional when he captained the North York Astros Canadian Professional Soccer League reserve squad.

“Its been a long love affair with the game for me as it is with anyone who is involved with anything for the majority of their life,” said Cristante. “What we’re trying to build here in Barrie is a high level of skill, yes, but also a love and respect for the game and each other.”

When Cristante came on board late 2014, the BSC was in a bit of turmoil and had many within questioning the direction and function. The long-time coach saw that and realized the problem was a lack of structure. Now, there are over 2,300 kids involved in many different age groups and skill levels learning from coaches who trained and excited to teach.

“We’ve added a soccer school for the kids who may be under-developed and also for those who are just looking for more touches on the ball,” said Cristante. “As for the coaches, we instituted a Coaches Apprenticeship Program. Any new coaches coming and wanting to learn will do so under one of regular coaches, which allows for everyone to be on the same page and teaching the same skills. Everybody teaches differently and that’s the beauty of organized sports, but so long as the club maintains its function for the families and players, it stays a strong system.”

Soccer itself has gotten much stronger in Canada with the massive popularity in Major League Soccer and particularly the success of Toronto FC. Last season, the Reds as their known averaged close to 27,000 fans per game and soccer registration in the province has climbed with every successful year the Toronto team has. That will only translate into success as the wave of fandom hits the 400 north and into the club in Barrie. Cristante knows that trends are to be watched as they can help an organization succeed and grow.

“Absolutely the big league’s success will help here,” said Cristante. “Look at what happened the last two years with the Blue Jays; I haven’t seen this much Jays merchandise in over a decade and I understand that sport has seen local registration success as well. Next year is also the World Cup, so we expect some great interest following that as well. Its important to watch for things that happen in your sport at every level so as to provide people who may be new to the game with the proper knowledge and understanding to move forward.”

As for what the club is doing with those already in the program, Cristante is proud of all his teams and players. While many are developing, and progressing well in the system, others are starting to make noise outside the city and represent Barrie well.

“We’re in the Huronia/Simcoe County region and some have our teams have been promoted to the Central Soccer League,” said Cristante. “Our U-14 girls were in the top four last year and barely lost a game while our U-16 boys were very strong and are playing regionals. Our U-15’s are CSL as well and both our U-21 men’s and OSL men’s teams extremely talented and entertaining to watch.”

An event that is sure to reach thousands around the province is the return of the club’s signature event. The annual soccer tournament Spiritfest returns and welcomes clubs from around Ontario to compete in the weekend festival. Spirit Fest was put on hold after it’s last event in the summer of 2014, just before Cristante took over the club. Ever the planner and organizer, the head of the BSC wanted to be sure the club was structured and ready to host the event properly when it was time.

“Its been long enough and its time to bring this amazing festival back,” said Cristante. “We wanted to get everything set up properly here and the fun back in the club before focusing on the event again. Businesses, the city and even other clubs have asked us to bring it back; it’s quite popular and very good for the local economy. So, we’re good to go for June 10 and 11. More news will be available soon but I encourage anyone and everyone to come out and see some great soccer.”

Cristante is also hard at work pushing the club’s presence into the community, something he and the other members feel strongly for. Not only has the BSC started communication with the Barrie Youth Haven and special needs groups in the city, but Cristante has started bringing the lessons of the game into area schools and showing kids the importance of a dedication to physical fitness. On May 1, the club will also be hosting a very special session that they feel is as important as anything they’ll do for kids.

“On May 1 we are holding a session in conjunction with New Path that will teach how to help and include children with mental health concerns,” said Cristante. “Kids nowadays are dealing with heightened anxiety and a number of issues that sometimes halt their potential sports life. Instead of keeping them away because we don’t know how to teach or not being able to teach properly, this program will help us help them. We’re very excited about it and more information will be available on our website soon.”