The founder and chair of Guelph-based Sleeman Breweries told local business leaders it is important for businesses to know where they came from and to celebrate their past — of course, it doesn’t hurt if that past includes stories of pirates and gangsters.

The event just happened to fall exactly on the 84th anniversary of the end of prohibition in United States – Dec. 5, 1933.

The revelation led to commercials for the company’s ‘Notoriously Good’ ad campaign across various media, including television and radio.

Another commercial in the campaign dealt with the Sleeman family’s pirating past in 17th century Cornwall, England.

“England at the time was fighting just about everybody and the monarchs didn’t have enough money to put out a big enough navy to do everything they wanted to do, so what they did is they allowed the people who lived along the shore in Cornwall to become gentleman pirates called privateers,” said Sleeman.

The privateers would hang lanterns along the shore, he said.

“At night, the people they were fighting with would think it was a harbour and they would go straight into the rocks and the Sleemans would steal everything off the ships,” said Sleeman.

The family went on to brew beer in England and around 1834, Sleeman’s great-great grandfather John H. Sleeman sailed for a new home near what is now St. Catharines, Ont. to found the Stamford Spring Brewery.

Due to water quality issues, John. H. Sleeman conducted testing across Ontario to find water that would best enable him to create English-style suds, which led him to relocate to Guelph in the 1850s.

“Water is very important to beer — if you think about buying a beer that says five percent alcohol, you ever wonder what the other 95 per cent is? About 92 per cent of it is water,” said Sleeman.

The breweries founded by John. H Sleeman were incorporated into the Sleeman Brewing and Malting Company in Guelph, which was operated until the company lost its license to brew beer in 1933.

Family legend said the government promised not to allow another Sleeman to brew beer for 50 years.

Decades later, Sleeman said he dropped out of high high school, had a falling out with his father and moved to England.

He moved back to Canada after a number of years and began a business importing ales from England.

After 50 years had passed since the closing of the business, Sleeman’s Aunt Florian let him in on the family secret — she had been safeguarding the family’s recipe book for half a century.

The recipe book is actually a leather-bound diary that his grandfather George A. Sleeman kept from July 20, 1897 to Aug. 3, 1898 which holds various recipes for the beers they made at the time. 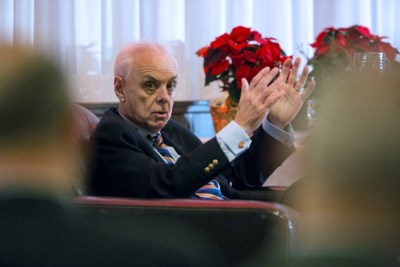 In 1984, Florian presented the recipe book and a distinctive clear bottlewith raised lettering to Sleeman.

The recipe for what is today known as Sleeman Cream Ale is found on page 64 of the diary.

“That’s a recipe book that Molson and Labatt would love to have a look at,” said Sleeman.

Sleeman’s father never spoke of the family business, he said.

“Fathers and sons often have challenging times. I think my aunt was smart enough to (not let) the father son traditional challenges get in the way of a generational business. She just waited on the sidelines and took it on herself to go ‘maybe your dad isn’t going to tell you about this, so I will,’” said Sleeman.

Florian and Sleeman drove to Guelph to see Sleeman House, the old streetcar barns and Woodlawn Cemetery, where some of his descendants are buried.

“(My great-great grandfather) made the beer in Guelph. The bottles were produced and sold here in Guelph. The consumers, the employers were all in Guelph,” said Sleeman.

Through a number of negotiations, Sleeman bought the company name back and reregistered the trademark before reviving the family business in 1984.

Sleeman said he could have started the brewery anywhere, but it was important to him that the company settle in Guelph.

“The Sleeman family has been here a long time. I wanted to recreate that and celebrate that and bring it back to life,” said Sleeman.

The brewery was acquired in 2006 by Sapporo Brewery in a $400-million deal Sleeman said allowed it to remain in operation and ensure a strong future for the brand and its employees.

Kithio Mwanzia, president and CEO of the Guelph Chamber of Commerce said Guelph is a jobs powerhouse today because of leaders like Sleeman who invested in the people who work for them.

It’s important for local business people to hear stories from a successful business leader, said Mwanzia, warts and all.

“History allows for our business community to think for themselves about the mistakes they have made in the past and how do they not make them in the future. To have the confidence in knowing that failure isn’t removed from the equation of business success,” said Mwanzia.

When the company’s Al Capone ad first ran on television, Sleeman said he received an angry late night phone call from his father, who was upset the family’s dirty laundry was being broadcast coast to coast.

Sleeman said he and his father never fully reconciled, but their relationship did improve somewhat before his death in 2010.

“Even though my dad and I weren’t always on the same page, I think secretly he was pretty proud that the family business was brought back to life. He came and toured the brewery. He was quiet, but certainly Florian was proud of it,” said Sleeman.

About the Author: Kenneth Armstrong

Train for FREE in December