RICHMOND, Va. — Virginia Gov. Ralph Northam is expected to announce plans Thursday to remove one of the country’s most iconic monuments to the Confederacy, a statue of Gen. Robert E.
Jun 3, 2020 8:56 PM By: Canadian Press 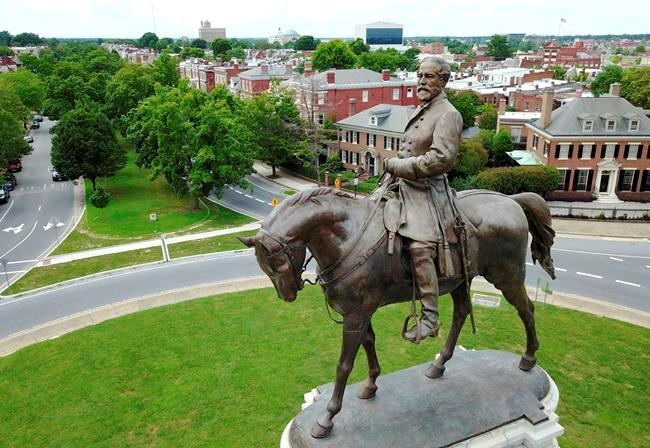 RICHMOND, Va. — Virginia Gov. Ralph Northam is expected to announce plans Thursday to remove one of the country’s most iconic monuments to the Confederacy, a statue of Gen. Robert E. Lee along Richmond’s prominent Monument Avenue, a senior administration official told The Associated Press.

The move would be an extraordinary victory for civil rights activists, whose calls for the removal of that monument and others in this former capital of the Confederacy have been resisted for years.

“That is a symbol for so many people, black and otherwise, of a time gone by of hate and oppression and being made to feel less than,” said Del. Jay Jones, a black lawmaker from Norfolk. He said he was “overcome” by emotion when he learned the statue was to come down.

The Democratic governor will direct the statue to be moved off its massive pedestal and put into storage while his administration seeks input on a new location, according to the official, who spoke on condition of anonymity because the official was not authorized to speak before the governor’s announcement.

Northam's decision comes amid turmoil across the nation and around the world over the death of George Floyd, a black man who died after a Minneapolis officer pressed his knee into Floyd’s neck for several minutes, even after he stopped moving.

Floyd's death has sparked outrage over issues of racism and police brutality and prompted a new wave of Confederate memorial removals in which even some of their longtime defenders have relented.

The Lee statue is one of five Confederate monuments along Monument Avenue, a prestigious residential street and National Historic Landmark district. Monuments along the avenue have been rallying points during protests in recent days over Floyd's death, and they have been tagged with graffiti, including messages that say "end police brutality” and “stop white supremacy.”

It was not immediately clear when the Lee statue would be removed.

Other tragedies in recent years have prompted similar nationwide soul searching over Confederate monuments, which some people regard as inappropriate tributes to the South’s slave-holding past. Others compare monument removals to erasing history.

Confederate memorials began coming down after a white supremacist killed nine black people at a Bible study in a church in South Carolina in 2015 and then again after a violent rally of white supremacists in Charlottesville in 2017.

Also on Wednesday, Richmond Mayor Levar Stoney announced plans to seek the removal of the other Confederate monuments along Monument Avenue, which include statues of Confederate President Jefferson Davis and Confederate Gens. Stonewall Jackson and J.E.B. Stuart. Those statues sit on city land, unlike the Lee statue, which is on state property.

Stoney said he would introduce an ordinance July 1 to have the statues removed. That’s when a new law goes into effect, which was signed earlier this year by Northam, that undoes an existing state law protecting Confederate monuments and instead lets local governments decide their fate.

“I appreciate the recommendations of the Monument Avenue Commission – those were the appropriate recommendations at the time," Stoney said in a statement, referencing a panel he established that studied what should be done with the monuments and recommended the removal of the Davis tribute. "But times have changed, and removing these statues will allow the healing process to begin for so many Black Richmonders and Virginians. Richmond is no longer the Capital of the Confederacy – it is filled with diversity and love for all – and we need to demonstrate that.”

Bill Gallasch, president of the Monument Avenue Preservation Society, said he worried the statues' removal would change the “soul” of the street, hurt tourism in historic Richmond and stir up violence between far-right and far-left groups.

The monument-removal plans also drew criticism from the Virginia Division of the Sons of Confederate Veterans. And Republican state Sen. Amanda Chase, who is also running for governor, started a petition on her campaign to save the statues.

“The radical left will not be satisfied until all white people are purged from our history books,” Chase's said.

But Joseph Rogers, a descendant of enslaved people and an organizer with the Virginia Defenders for Freedom, Justice & Equality, said he felt like the voices of black people are finally being heard. Rogers spoke from the vicinity of the Lee Monument, where another rally was taking place late Wednesday afternoon and where he described one wave of cheering after another.

Democrat Gideon wins primary, will face GOP Sen Collins
Jul 15, 2020 12:12 PM
Comments
We welcome your feedback and encourage you to share your thoughts. We ask that you be respectful of others and their points of view, refrain from personal attacks and stay on topic. To learn about our commenting policies and how we moderate, please read our Community Guidelines.