Please pardon us, while we talk about ourselves for a bit

Village Media CEO Jeff Elgie is the subject of this week’s Mid-Week Mugging as the company celebrates its fifth anniversary
0
Oct 25, 2018 4:30 PM By: Darren Taylor 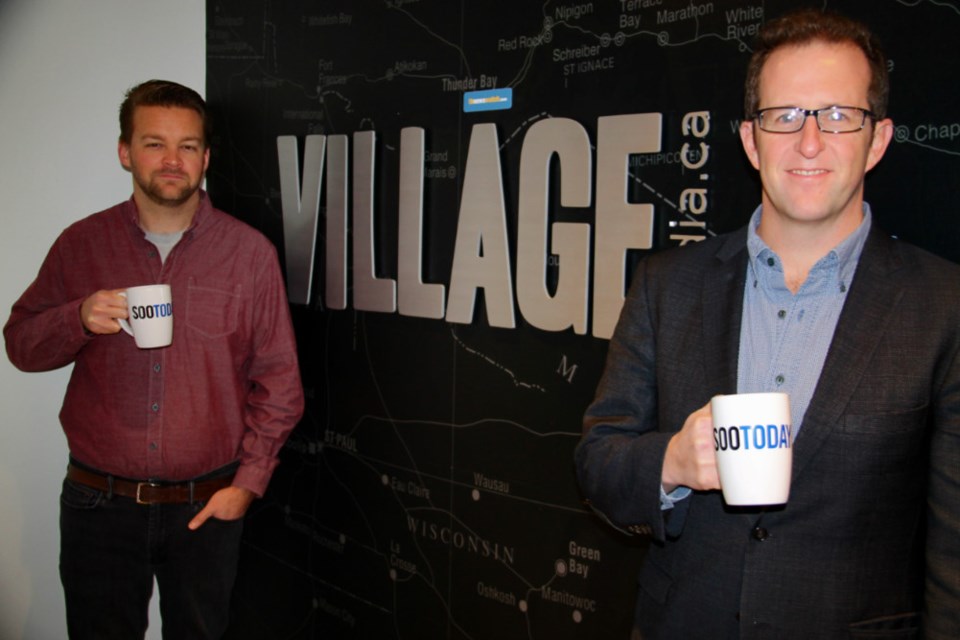 Did you know BarrieToday is part of Village Media, an internationally recognized, Ontario-based company that has created many other local news websites modelled after SooToday across the province and Canada?

As Village Media celebrated its fifth anniversary this month, we thought it would be cool to present Village Media CEO Jeff Elgie with one of his own company coffee mugs and hear some details of his amazing business success story.

The term ‘village,’ Elgie said, “suggested to me an intimate, connected community, and that’s what we wanted to build online, is closely connected tight communities in the cities we physically operate in. I love the feeling of that and it’s a great name. Dennis (Houle, Village Media’s Sault Ste. Marie-based creative director) came up with it, and we love it.

“There’s a tremendous amount of purpose in doing what we’re doing as you see communities lose any form of local journalism... when you start to see that and realize we can bring local news to a community, it really has created a sense of purpose in what I do, probably unlike any other business venture I’ve done in the past.”

Elgie was born and raised in Sault Ste. Marie, a Sir James Dunn grad who went on to study business at the University of Western Ontario.

It was while doing work for SooToday through his digital consulting firm, Digital Intelligence Group (DIG), that Elgie says he saw where the local media company could go.

“I was fascinated by the business and thought SooToday had a ton of potential," he said.

SooToday was launched as a news site in 2001, and by the time Elgie took ownership in 2013 and formed Village Media, the company had long included a sister site, BayToday, in North Bay.

“I knew that for me to be interested in the business I wanted to be able to grow it beyond the Sault, and North Bay was a chance to prove it could be done well in another city, but I knew it wouldn’t satisfy my quest for growing businesses, so when I took over it was always with a plan to grow it bigger,” Elgie said.

Village has since expanded into Timmins, Elliot Lake and southern Ontario, with sites in Barrie, Bradford, Collingwood, Guelph, Newmarket and Orillia.

The company also has partnerships with Rogers Media news sites in Halifax, Ottawa and Kitchener, and with Glacier Media sites in Kamloops and Prince George. Closer to home in Sault Ste. Marie, Village Media works with Sudbury.com, TBNewswatch.com in Thunder Bay and The Manitoulin Expositor.

While Elgie is justifiably proud of SooToday being a huge hometown success, with the Sault as the site of Village Media’s head office, he said he finds the story of GuelphToday is particularly interesting.

Within days of the sudden folding of the local daily paper, the Guelph Mercury, in January 2016, Village Media launched GuelphToday.

“It was a great story for a lot of reasons,” Elgie said. “It was a chance for us to prove out the technology we made could be deployed that quickly. It was also a chance to save jobs and local news in that community, and it was the first point in time where we really got national recognition for what we were doing.

“I remember to this day one of the highlight moments was Village Media being on the front page of the Globe and Mail. I thought that was awesome," he added. "We proved out we had the team and technology to be able to roll out in a market that quickly, save jobs and continue to deliver local news to a community that size and get recognized for what we were doing.”

Elgie has told Village’s story on TVOntario’s The Agenda with Steve Paikin, and has also caught Google’s attention.

“We’ve been recognized quite well by the vice president of news for Google globally. He’s a big fan of ours and he talks all over the world about what we’re doing," Elgie said. "They’ve been a good partner of ours, not a formal business partner, but we have a tremendous working relationship with them.”

Elgie recently returned from Phoenix, where he joined 150 people from across North America for a specialized news conference named Newsgeist, and will be in San Francisco this weekend as one of only 30 people invited from around the world for a Google news working group gathering, dedicated to addressing the concept of local news coverage.

If you're looking for seafood and a show, might as well get Fancy
Dec 18, 2019 4:30 PM
Comments
We welcome your feedback and encourage you to share your thoughts on this story. We ask that you be respectful of others and their points of view, refrain from personal attacks and stay on topic. To learn about our commenting policies and how we moderate, please read our Community Guidelines.

About the Author: Darren Taylor

Darren Taylor is a news reporter and photographer in Sault Ste Marie. He regularly covers community events, political announcements and numerous board meetings. With a background in broadcast journalism, Darren has worked in the media since 1996.
Read more