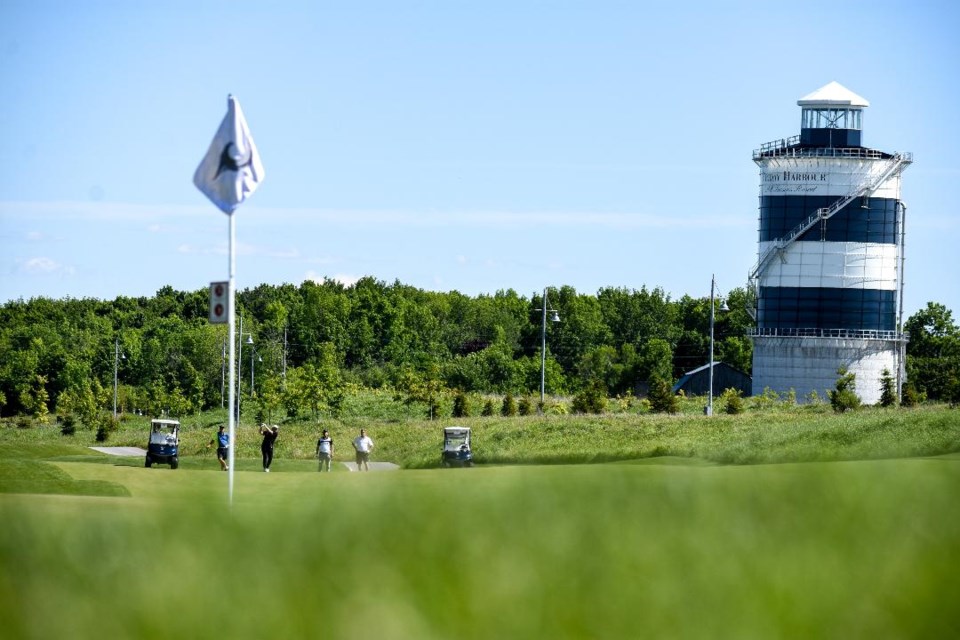 Shawn Denomme has his eye on the prize at the RBC PGA Scramble Local Qualifier event being held Monday at The Nest Golf Club at Friday Harbour Resort in Innisfil.

With an opportunity to advance to the regional qualifier with the ultimate goal of playing in the National Championships in October, the Barrie golfer and his foursome are excited to say the least.

Denomme and his team of buddies, including Mark Deason, Jason Willard and Sheldon Burke, have played together before, mind you the stakes were a wee bit lower.

"We played in the charity parents hockey fundraisers. I don't think that's as competitive," Denomme said with a laugh. "Winning the LCBO gift card is not as competitive as what we're doing (now)."

"That's still not a bad gift," he joked.

Kidding aside, Denomme and his team know the fact the PGA Scramble series of events draw thousands of amateur golfers in teams of four across the country only adds to their competitive fire.

Especially with the chance to play in the National Championship, which will be held at the Cabot Links Golf Resort and Cabot Cliffs Golf Resort in Inverness, N.S.

"I'd be lying if I didn't say I want to make it to the end, because I know what the end prize is," said Denomme, who has been golfing for more than 30 years. "I actually had the opportunity to play (Cabot Links) last year and it's an unbelievable golf course set on the ocean there in Nova Scotia.

"It was unbelievable to have that chance and I dreamed just to make it back there. It would be unreal."

Denomme has played at The Nest Golf Club a couple of times ahead of getting in some extra rounds there this week in preparation for the local qualifier. He says he loves the course.

"It's a beautifully maintained course," he said. "The fairways and greens are always in perfect condition. That's the one thing I noticed the most about this place when you compare it to others, is that the manicure is so good. It's a bit of a forgiving course, but I think the way it bites you back is all the different slopes and hills, and fairways and greens.

"You think you've hit a great shot and the slope shoots you left 30 yards. I think that's how it bites you back, but when you're playing well it's a very forgiving, very enjoyable golf course."

Denomme was out at the course on Tuesday and planned to get out at least a couple more times before Monday's event.

"I've played it a couple of times and right now it's funny it's playing completely different because it's soak and wet, but that's the way the golf course gets you back," he said. "It's such a beautiful golf course when you're out here and it's in such perfect condition. It's just fun to be on this golf course and play it."

This is the first time he has played in the PGA qualifier and Denomme explained the way it's set up it's not like you can just go out and get four scratch golfers because it's a handicap tournament.

"So you have to have a good mix, because you have to add up to a certain number," he said of the entry requirements for a foursome.

The Barrie golfer says he has one guy "who hits the ball off a tee a thousand miles" and "one guy is a hell of a putter." Deason and him are the "steady players."

"There's the times where the three first guys hit bad shots and then you got all the pressure being the last guy to hit. Sometimes it works and sometimes it doesn't," Denomme said with a laugh.

"We have a good time," he added. "We're all good friends. We play men's league hockey together and we're just really good friends. So the fact that it's going to be three of your buddies that you would like to hang out with, it'll make it a nice relaxing round and then you hope you just go and play well."

With many of the normal tournaments they've played in up north cancelled, Denomme admits it's just nice to get out on the course with your friends in these trying times with the COVID-19 pandemic.

"Just to get out and forget about it for a nice Monday afternoon will be great," he said.

Participants will get the opportunity to play alongside a PGA of Canada Professional at the regional and final events. The RBC PGA Scramble is a national series of events played at more than 100 golf facilities across the country.

The event is open to everyone with a public entry fee of $29.95 in addition to a $150 event fee to be paid at the club. Registrants will also receive prizing from Titleist and FootJoy.

"At the same time, it's going to be a social aspect, it's also going to be competitive," Denomme said. "We're relatively competitive and like playing in these sort of tournaments. Four-man scrambles are always fun to play in."

Denomme hopes the rain we've seen this week means sunny skies are on their way for early next week.

"I'm a bit of a fairweather player, so I'd love for it to be sunny and not rainy on Monday," he said.