Mississauga Steelheads forward James Hardie's scoring prowess could be a hidden gem for a team later in the draft, says one scout
May 20, 2020 12:00 PM By: Gene Pereira 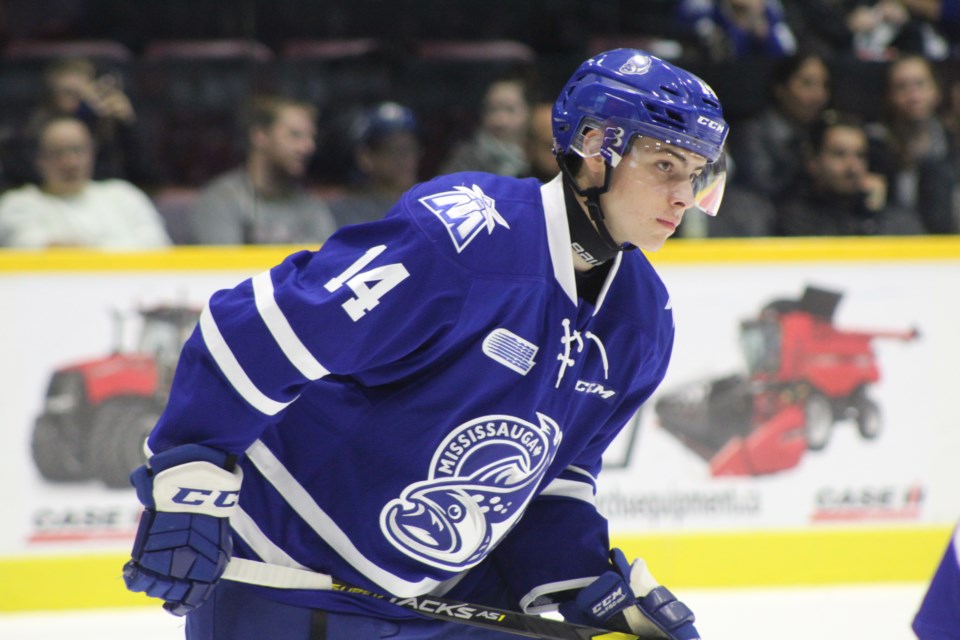 Mississauga Steelheads forward James Hardie, an Innisfil native who played his 'AAA' hockey in Barrie, is shown in a file photo Raymond Bowe/BarrieToday

James Hardie may have to wait a little longer for his big day to arrive.

The Innisfil native and former Barrie Colts 'AAA' minor-midget grad is expected to hear his name called in the 2020 NHL Entry Draft, but with COVID-19 bringing the NHL season to a sudden halt, and now talk that the annual draft weekend scheduled for June 26-27 in Montreal will be delayed and moved online, the anticipation will only grow for the young forward.

At least when the big day does finally arrive, Hardie will have some familiar company heading with him into the NHL. Former Barrie minor-midget teammate and current Barrie Colts OHL star Tyson Foerster is one of the top prospects for this year's draft.

The two friends have been leaning on each another and sharing their experiences and excitement.

"We talk a lot," said the Steelheads forward, who admits it's a lot of fun facing Foerster and his hometown team in front of a large group of family and friends whenever Mississauga has a game in Barrie. "We're both going through the same kind of thing here, talking to NHL teams and stuff like that. It's a real exciting time for us and I know he's doing really well and had a great year, and he's meeting with a lot of teams.

"It's a cool thing to go through and it sucks that it won't be a draft where we go up on stage, but it's still a cool thing to be mentioned to be drafted into the NHL," Hardie added. "It's a dream come true."

While much is still up in the air surrounding the draft, Hardie knows he can't control any of that.

"It's something you wait for your whole life," said the second-year winger, who busted out this season with 34 goals and 29 assists for 63 points in 59 games. "It's supposed to happen at the end of June, which is coming up soon, so not knowing when it's happening is not (ideal), I guess, but it's something you just want to get it over with.

"All the nerves and waiting for what's going to happen. . . but it's a very exciting time and I'm not going to take any moment for granted."

The five-foot-11, 180-pound sniper heads into the draft rated at 163rd overall among North American skaters in the NHL Central Scouting final rankings.

His scoring prowess could prove to be a real find for a team later in the draft, says a longtime scout with an NHL Eastern Conference team.

"You can lead the horse to water to work harder, (but) the one thing that's hard to teach is hockey sense and that knack around the net, the feel," the NHL scout explained. "That's a very hard thing to cultivate within a player, so the nice thing for him is he has one of the harder attributes for someone to acquire. He has it already.

"The other thing if he works on it, there is the potential to be a pretty good player at the next level."

Hardie had been ranked 213th overall in the Central Scouting mid-term rankings, but after a somewhat slow start to the season the scorer turned up his game in a big way after the Christmas break. He credits a discussion with Steelheads general manager and head coach James Richmond and the coaching staff for his turnaround.

"We had a talk and that was a big key for me," said Hardie, who was Mississauga's eighth-overall pick in the 2018 OHL Priority Selection. "I just told them that I was frustrated in myself and wasn't performing the way I wanted to. First game back after the Christmas break was in Owen Sound and that was my first career three-point night.

"I had (seven games with three or more points) after that and I think that's where it kind of took off for me."

Hardie, who was the youngest player on the team, had a solid rookie campaign with the Steelheads, scoring 15 times. He took on a bigger role and much more responsibility this past season and the increased ice time was a huge boost for his confidence.

"I love having pressure on my shoulders," said Hardie, who was disappointed with the early finish to the season and no playoffs, but believes he left his mark for scouts. "Going out there there's going to be people watching you no matter where you're playing. Having confidence is a big thing for me and at the start of the year I didn't have the most confidence, I had a slow start. I was talking to my coach and he's pretty much always had the most confidence in the world in me and then it just went up from there."

"I've always been a shoot-first kind of payer," added Hardie, who had 21 goals after the holiday break. "I think I really showed it in the last half of the year."

It's important that Hardie plays with pace, explained the scout. He points to the forward's ability to make smart little plays which make him effective.

"You kind of notice him quietly," the NHL scout said. "He's not a real dynamic player, doesn't have the fastest speed or is the biggest guy, but he has really high hockey sense. He gets himself to the right spots and he has a high level of skill to go along with it.

"His biggest thing, as he gets to the next level, is he gets a little quicker, a little bigger, a little stronger. He's going to have to work on his full 200-foot game to round things out."

While Hardie admits it's been boring stuck at home with the world on hold because of the coronavirus, he has continued to train. While he hasn't been able to get on the ice, he's kept in touch with trainer Danny Blais at NTR and they go through a workout every morning before going out for an afternoon run and then at night throwing on the rollerblades to keep his legs going.

He's also does yoga with his teammates on Zoom every Thursday.

"It's really tough not seeing the guys," said Hardie. "I probably haven't seen them in two months. It's really hard, but the rollerblades are really working out. There's lots of stuff I can do here. I got my net, pucks and I'm rollerblading 10K.

"It's kind of the same as a stride. It's different, but you got to do what you can do and there's nothing we can do to open rinks. You got to make do with whatever you got."

Hardie tries to pattern his game after Vancouver Canucks forward Tyler Toffoli. While he grew up a Washington Capitals fan, who drafts him doesn't really matter for Hardie. He just wants an opportunity to prove he can play at the next level.

It's been a whirlwind last couple of seasons, he said. It only seems like yesterday he and Foerster were getting ready to play with the minor-midget Colts and now both are doing Zoom interviews with NHL clubs.

"It's something you wait for your whole life and it'll be great to go to a team and after that it's just getting started," he said. "You just got to battle to get your spot there and work harder every day now. It's just the business.

"Nothing is guaranteed anymore and it's a business you've been waiting for your whole life."