'I don't know what a competitive season looks like ... for any sport, but we got to find a way to keep these young kids active and engaged,' said skating school co-owner
Jul 8, 2020 7:00 PM By: Gene Pereira 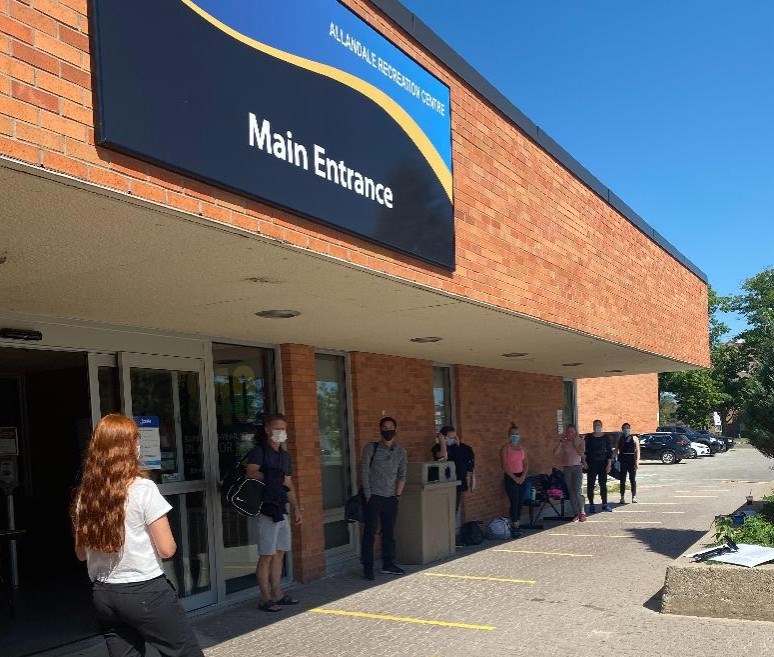 Skaters go through a health screening outside Allandale Recreation Centre before taking to the ice at the Mariposa School of Skating. Contributed photo

Mariposa School of Skating athletes weren't the only ones excited to get back on the ice when the provincial government announced in mid-June it was moving to Phase 2 of the COVID-19 recovery along with the framework for reopening the province.

"To step out in the ice was wonderful for me in particular because my hair's really grown out and feeling the wind blowing through my hair was awesome," Islam said before laughing out loud.

Long hair aside, Islam was happy to see that after three tough months, the skaters could return to doing what they love.

"It was great because they could do skating right away," Islam said.

Mariposa closed its doors on March 13 when the province and most of the world went into a lockdown. Getting through all this has been a whole new world for Islam and school co-owner Paul Matheson.

"It's a challenge unlike anything else we've ever had or anything we thought we'd have," said Matheson, who coaches dance, stroking and hockey at the world-renowned figure skating school.

"The expression we use is there's no playbook for this to figure out how to make all this work, starting with going to the (City of Barrie) and asking them to find a way to get our athletes back on the ice.

"The whole situation is so unique. . . You'd never think anything like this would unfold, yet you're going and blazing that trail."

Islam and Matheson knew right away they had to keep the skaters engaged. They had to keep everybody in some sense of normalcy and make it accessible because there's a lot of families in different situations and people were suddenly out of work.

That's when they came up with the idea for Zoom sessions, up to five or seven times a week, involving Mariposa coaches and skaters.

"There was a lot of adjusting on the fly as we went through it, adjusting the timing and the length of sessions and the coaches that were instructing to help keep the sessions new and interesting," Matheson explained. "And lucky for us, our off-ice coaches and on-ice coaches they became so good at it, so quickly. We had skaters from all over the world basically asking and sending emails to be part of it as long as they had permission from their coaches at home to join.

"We had a lot of positive feedback from them, just saying the product our coaches were able to offer through Zoom and keep everybody normal was second to none, so we're very proud and fortunate to be able to do that."

The Zoom sessions kept the skaters motivated and didn't cost the school a lot of overhead because they didn't have to pay for ice.

"In that regards, we were just treading water," said Islam, who praises the City, the Simcoe Muskoka District Health Unit along with Skate Ontario and Skate Canada for all their help and guidance through the pandemic.

Knowing the financial strains of the pandemic for some families, they offered a graduated payment system where they could pay anywhere from $100 for the month to free for families who weren't working.

"The families have been quite appreciative," Islam said. "A number of families were just so grateful that we didn't just shut our doors and click off our computers and hang up our phones. We were reaching out to the kids and doing mental training sessions and doing virtual jump classes. We were doing nutrition seminars, we were getting people like (Mariposa alumni) Jeff Buttle and Brian Orser to do Q and A's.

"Our coaches, to their credit through March and April, were doing Zoom sessions and they were doing it for free."

With the provincial guidelines limiting gatherings to 10, current Mariposa on-ice sessions include two coaches and eight skaters. Those entering the Allandale Recreation centre must line up outside of the building and go through a health screening before entering.

Everybody has their own seat at the side of the rink to lace up their skates as dressing rooms can't be used.

Session tracking using sheets from Skate Ontario will be kept on file for seven years, so if there is an outbreak of COVID tomorrow they can look back at the tracking sheets.

"The business model isn't great, so Paul and I are waiting for the province to go to gatherings of 15 or the next stage and start where we're a business," Islam said.

"We want to keep our athletes engaged, we want to provide opportunities for our coaches to coach, which we're doing, but the model is going to have to change further down the road. We're going to be OK, but it has been a bit of a stress."

Islam, who has been coaching at the school since the late 1980s, admits a familiar face he sees at the rink has helped him get through these difficult times.

"Walking into arena and seeing Doug Leigh, there's no more higher standard for motivation and positivity than that man there," he said of the Mariposa's founder and coach. "It doesn't matter how complicated things seem, there's an opportunity in what we're doing here."

And that's been an opportunity to work on fundamentals and skill development. Be it skating or hockey, Islam says it's normally more about winning a game or skating events and less about developing systems.

"You don't have that protractive fundamental development time through the season because you're doing that in the spring and people are trying to get their double jumps and their triple jumps and their new programs and new choreography," he said. "Now it's a totally new landscape."

And because of that, Islam believes they're stronger now as athletes.

"They're better athletes right now," Islam said. "Now we just got to transition them to the ice and give them the tools and the skills they need to be in this for the long haul and then once we get back to competition...  it's going to be more of a mental game. The ones that have the mental strength to see this through, it's going to be great."

For Mariposa skaters like Keegan Messing and Nam Nguyen, the pandemic means waiting for the Olympics.

While normally at this time skaters would be gearing up for the upcoming competitive season and hockey players getting set for tryouts and training camps, there's no timeline for the pandemic and how long it goes before they find a vaccine and some sense of normalcy can return remain unknown.

"You know at some point it's going to get back, so it's actually been great to see the overwhelming majority of kids and the athletes just happy to be training again," Matheson said. "Even though there's not something right around the corner, they're happy to be back out on the ice."

Islam said the goal is to get the province to increase the size of gatherings so waiting lists can disappear and they can have their skaters return from all over the globe, like Hong Kong, Malaysia, Britain and Mexico.

"We miss having those kids here because it was a real nice cultural opportunity for all our kids to train with each other," he said. "We're here, we're viable, we're doing it."