Defenceman Connor Corcoran, a forward through minor hockey, had a superb OHL season with 19 goals and 35 assists in 62 games with Windsor
Jun 10, 2020 7:00 PM By: Gene Pereira 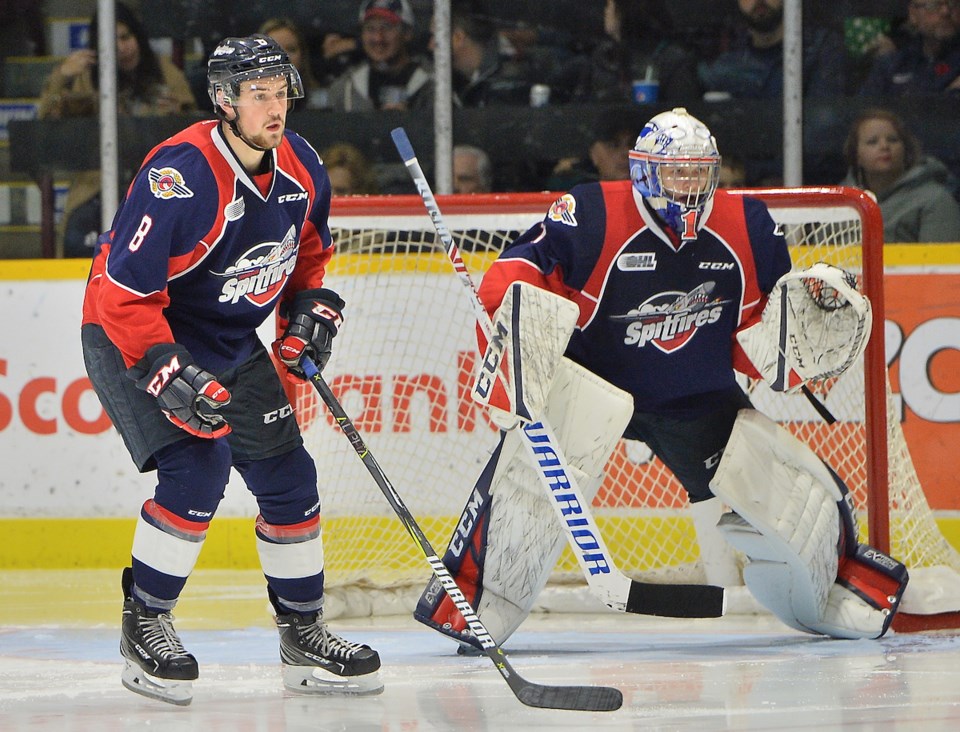 Connor Corcoran has found a little landscaping work goes a long way in helping him keep busy and stay fit during the COVID-19 pandemic.

"I'm trying my best to workout at home and I've been doing a bit of landscaping, which is helping me stay in shape as well," said the Barrie Colts 'AAA' minor-midget hockey graduate, who was a key member on the blue-line last season for the Ontario Hockey League's Windsor Spitfires.

The yard work isn't the only thing taking shape for Corcoran these days. The landscape on the ice looks just as appealing after signing a three-year, entry-level contract with the NHL's Vegas Golden Knights last Monday.

The Knights' fifth-round pick (154th overall) in the 2018 NHL Draft was excited and relieved after inking his deal just hours before the 5 p.m. deadline on June 1.

"It was definitely a little bit nerve-wracking," the 19-year-old told BarrieToday over the phone from his home in Beeton. "It was a really good experience and I was with my family through it all, and it helped a lot. I was really excited to get it done.

"They're a new franchise, but they've had a lot of success," he added of the Knights, who went all the way to the Stanley Cup finals as an expansion team in 2018. "They have a great organization, great people and I'm very excited."

Corcoran, who is represented by the Will Sports Group, wasn't sure what would happen heading into the final hours of negotiations.

"I had no clue," he said of getting the deal done. "It's a business, right? It all worked out how I wanted it to work out, so it ended up being great.

"(My agent) definitely was in contact with me the whole time and he did a really good job," Corcoran added.

The six-foot-three, 194-pound rearguard had a junior career-best 19 goals and 35 assists for 54 points in 62 games with the Spitfires last season.

Playing on a talented, young Spitfires team that took a big step forward last season helped Corcoran put aside all the pressure that comes in one's NHL draft year.

"We have a great group of guys and we had a good team this year and honestly I just had fun," said the fourth-year veteran, who ranked ninth overall in scoring among OHL defencemen. "I just played every game and I didn't really think much about all the things around me. I just played, had fun and ended up having a good year."

A forward throughout minor hockey until converting to the point the season before his OHL draft year in 2016, the offensive side of the game was already there for Corcoran, but it was solidifying his defensive game last season that really helped him take his game to the next level.

Corcoran credits former NHL defenceman and Barrie Colt Mike Weber, who's his defensive coach in Windsor, with helping him get there.

"He has experience in the NHL and pro hockey," Corcoran said of the former Buffalo Sabres player. "He's an unbelievable guy and unbelievable coach and he's taught me a lot. I really respect him, so I think he's definitely one of the guys that helped bring my game forward."

Corcoran knows there's still a ways to go to make his dream of playing in the NHL come true, but he's thrilled the contract is done and he's one step closer.

"I'm ready to get to work, whatever it is, and hopefully I can shine when they give me the chance," he said.

While he could return for an overage season with the Spitfires, Corcoran is hoping to earn a spot next season with the Henderson Silver Knights, the club's new American Hockey League (AHL) farm team, which is also based in Nevada.

Corcoran expects he'll be heading to the desert this summer to hit the ice with other Vegas prospects.

It's been quite the journey over the last few years for Corcoran, who won a Memorial Cup with the Spitfires as a rookie in 2017 and now finds himself a signed NHL prospect.

His family has been there with him throughout it all and their support has meant so much to him.

"They've made so many sacrifices for me to get to this point," he said. "It's crazy how many things they've done for me and my hockey career. It's just very exciting, especially having them with me through it all and I wouldn't want anyone else with me.

"I love them very much and they want what's best for me and they're very happy and proud, and so am I."

Corcoran will have to put his landscaping on hold for now. With a big part of the province recently announcing they were moving into Phase 2 and everything starting to open up again, the blue-liner is looking forward to getting back on skates.

"I'm excited to get back to work and hopefully things start opening up," he said.

Colts don't have to look too far for new head coach
Sep 9, 2020 7:30 PM
Comments
We welcome your feedback and encourage you to share your thoughts. We ask that you be respectful of others and their points of view, refrain from personal attacks and stay on topic. To learn about our commenting policies and how we moderate, please read our Community Guidelines.