'It's going to be very weird on July 1 when I'm not on my way driving to East Bayfield to coach basketball,' co-director says of Barrie camp, which has grown from one week with 60 players to three weeks and more than 600 kids
May 27, 2020 7:30 PM By: Gene Pereira 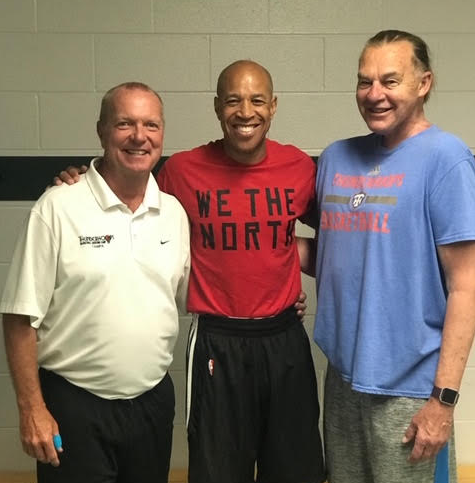 Paul Hopper always looks forward to hearing the sound of basketballs bouncing and the swoosh of a basketball going through the net. Listening to the squeaking shoes on the court and seeing all those smiling faces on the kids.

There'll be none of those familiar sights and sounds for Hopper this July.

COVID-19 has brought a halt to just about everything, including now the popular Thunderhoops Basketball Shooting Camp he runs with Marty McCrone in Barrie out of the East Bayfield Community Centre.

This would have been their 27th season running the camp, but for the first time the co-directors have found themselves having to make the difficult decision to cancel this year's three-week camp.

Hopper admits he's going to miss being out there with the kids.

"Absolutely," he told BarrieToday. "I've loved every second of the last 27 years. I'm going to have a fun summer with my family at the golf course, but it's going to be very weird on July 1 when I'm not on my way driving to East Bayfield to coach basketball."

Making sure the kids are safe comes first and that just wasn't possible with a contagious virus.

"It's just the nature of basketball," said Hopper, whose Thunderhoops registration has grown from a one-week camp with 60 campers to three weeks and more than 600 kids. "It's not really conducive to social distancing, especially with the little boys. You know what they're like. You can't expect a game of 5-on-5 with 10 guys that are in Grade 4 and tell them to stay six feet apart. It just won't work."

Hopper and McCrone also run an overnight Thunderhoops camp in Orillia, but that has also had to be shelved with the province cancelling every overnight camp.

"We didn't have a choice on that one," Hopper said.

Hopper also explained how they haven't even been able to obtain their normal insurance for the camp this year. They normally get it through the Ontario Basketball Association, but their offices are closed.

"Even if the (province and city) said go ahead and run a camp, you couldn't run a camp without insurance," he said. "If one or two kids get sick and take it home and it spreads through the community, it's just not worth the risk. Marty and I weren't willing to take that risk."

Registration for this year's camp was going at its regular pace before it came to a complete stop the day the province shut down schools.

Hopper says they've incurred some expenses they will just have to eat with this year's cancellation.

Normally, they get their basketballs from China, but that wasn't possible and instead ordered them from a company in Hamilton that worked out to be more expensive.

Still, Hopper feels most for the kids who will miss out on having some fun on the basketball court and especially those who work for them at the camp.

"I feel particularly bad for the Grade 9 and 10 kids that we hired this year," he said. "For many kids, they come to our camp for five or six years and then we hire them as junior coaches or counsellors. They really look forward to it and for many of them it's their first chance for employment, their first job. I feel really bad for those kids."

The Thunderhoops camp has sold out for many of its 26 years and several of the camp goers have gone on to play college or university and even suiting up for the national team like WNBA star and Canadian Olympic team player Kayla Alexander. If you played basketball in Barrie, chances are you attended Thunderhoops camp.

Now there are even second-generation campers.

"We've had a lot of kids in the last couple of years that their parents came to camp and now they're coming to camp," Hopper said. "That's pretty remarkable. You think about it, when we started the camp 27 years ago we used to go to Grade 12, so we had 16-year-olds at our camp. Some of those kids are late-40s now."

It's been quite a journey for Hopper and McCrone who used to take their high-school players to camps in Tennessee and Indiana and then thought why not just run a camp at school.

"We started this off as a school fundraiser to help promote our own basketball team and then to have a little bit of money to take them to good quality overnight tournaments," Hopper said. "We had about 30 kids the first year and then we just got bigger and bigger every year."

It's been rewarding for the two teachers to see the camp grow over the years. While offering a diversified program that caters to players from beginners to elite players, the key to their success is easy, says Hopper.

They work on skills development, but they've made it fun. While a lot of camps try to guarantee kids they are going to get a scholarship, get to the next level or play at a higher division, Thunderhoops has tried to make sure there's just as much focus on players of all levels.

"We've really decided right from the get-go 27 years ago we're going to teach the skills and we're going to make it fun," said Hopper, who coached and taught in high school for more than 32 years before retiring from teaching five years ago.

"The kids that are good, they're going to get to where they want to be anyway," he added. "If you make it too competitive, then you lose the bottom part of the pyramid. Too many people are trying to go after the elite kid, but there are only so many elite kids at the top of the pyramid."

Hopper says they going after the "grassroots kids"

They'll look to begin working on next year's camp soon, but right now it's just wait and see with so much uncertain about COVID-19 and when community sports can return.

They can't wait to see those smiles and hear those familiar sounds on the court again.

"It's going to be a very different summer for both of us," Hopper said.