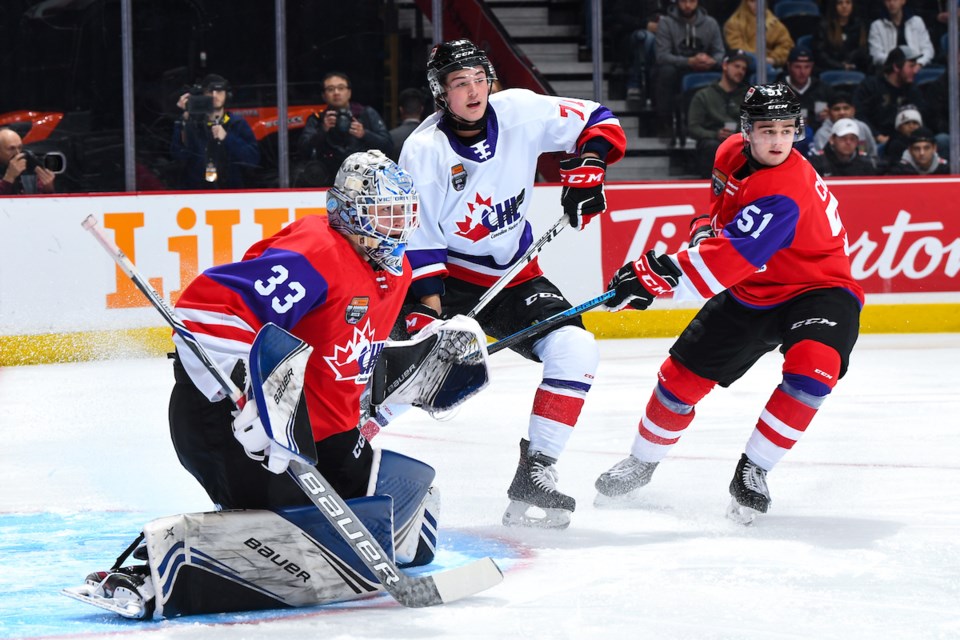 "Even being two years younger, he was always trying to keep up with Dawson and his buddies," Glen Foerster recalled of his sons growing up, who could often be found playing hockey in the basement or out on the driveway. "It was a good push for him, always just wanting to try and be better than his brother."

Next week, Barrie Colts forward Tyson Foerster is expected to hear his name called in the first round of the NHL Entry Draft. One of the elite scorers in the draft, Foerster's life-long dream is just around the corner.

But back in those days growing up in Alliston, Tyson just wanted to be like his big brother. When he saw Dawson on the ice playing hockey, a two-year-old Tyson started skating.

"Him and his brother were pretty close growing up," the father remembered of his boys during an interview with BarrieToday. "In every sport, (Tyson) was always pushing and pushing and wanted to be better than his brother, playing a bit of baseball, some lacrosse, ball hockey. A bit of everything. He just always wanted to be the better person."

Glen built a little floor hockey rink for his sons in the basement. They would spend hours running around on a floor that had the lines painted on it along with two nets that got pretty worn down over the years. From mini sticks at first to regular hockey sticks, there was no shortage of action.

As you could imagine, every game between the two siblings was a must-win. Tyson laughs as he recalls just how competitive things got between the two.

"One of us would always come up crying when we were little," recalls the now-18-year-old Foerster. "I was always trying to beat him. I always looked up to him when I was little. He was always better than me, but once I started getting older I started taking over more and more, so it kind of pushed me more."

Which is why Tyson will be thrilled having his brother and the rest of his family right beside him at home on that special day next Tuesday when the draft will be held virtually for the first time in NHL history.

Normally held in June, the pandemic has wreaked havoc on everything associated with the NHL, including the draft date and the setup.

While they won't be at an NHL arena like normal, and the date was only announced a little more than two weeks ago, none of that really matters for the Colts star.

"It's been a long time waiting, but I'm really excited," the six-foot-two, 194-pound winger said. "I just want to hear my name called."

After a solid introduction with 10 goals and 23 points as a rookie in 2018-19, Foerster, armed with a one-timer and a knack for scoring big goals, certainly caught the attention of NHL scouts last season. He led the Colts in goals (36) and points (80) and by the time the pandemic had shut down the OHL in early March, the sniper climbed 20 spots on the NHL Central Scouting Final 2020 Draft Rankings to No. 21 overall among North American skaters.

"Out of the whole draft group, he is one of the best pure finishers," an Eastern Conference NHL scout told BarrieToday. "When he got the puck on his stick in a prime scoring area, there's a very good chance that's going in the net. Every time he got the puck in those areas, it was a threat. There's times a lot of good players will throw the puck on net or they'll wire it, but he's a guy every shot was with a purpose of scoring. I know that sounds funny, but that's just the way it is in hockey.

"Every time he has the puck in that area, he was a threat to score," the scout added. "That's the basis of his game and as his year went on he started rounding out some of the other things that make him so much more attractive."

Foerster said his confidence grew by the game. It really took off when just the second game into last year in a 6-2 win at home over the London Knights he buried the game winner in the slot early in the third period.

"I had a goal and Ryan (Suzuki) texted me after like 'Congrats, just keep doing your thing,'" Foerster explained. "I think after that my confidence really grew and I knew I could do good things in the league and hopefully get drafted to the NHL."

Glen says Tyson was always one of the better kids in his age group in minor hockey. Always one of the bigger kids, Tyson would have another growth spurt in his later years of playing 'AAA' minor hockey in Barrie. His dad figured he'd get drafted into the OHL, but Tyson "just got going from there once he got the opportunity."

"We knew he was ahead of the curve at that point (in 'AAA' novice), but then even his first few years in Barrie he was one of the top players," he said. "You always think what he could do, but there's no expectations and I never pushed him. He just loves the game and I think you can tell. It's fun out there and it's something he wants to do."

Tyson pushed himself. He knew his skating had to improve if he was to give himself a good shot of playing in the NHL someday. He's spent countless hours working with NCCP certified national coach Paul Matheson at the world renowned Mariposa School of Skating in Barrie.

"I think that's one of the things holding me, so I knew coming in — and with COVID happening — it was good for me," Foerster said. "I had a lot more time to actually work on it. Paul helps a lot. Paul was our skating coach during the year too, so I think just getting back with him in the summer and skating with him as much as I can really helped a lot."

His improved skating has taken his game to another level and it certainly didn't go unnoticed. Neither did his determination to improve his game. A real positive for NHL scouts who watched him closely over last season

"Everyone knew that's one of his deficiencies," the NHL Eastern scout said of Foerster's skating. "He's shown he's willing to go back and put the time in to make those improvements. Getting to know him a bit, you realize he is a hard worker and he wants to succeed. So that bodes well for his future.

"Every year he does a little bit more and gets a little bit better and by the time he's ready to take that next step he'll give himself a real good shot to succeed."

Heading into his draft year, Foerster knew there'd be plenty eyes on him to see if he could take that next step. That kind of pressure can be quite a load to carry on a young teenager's shoulders. A load that got heavier when Barrie dealt away its top veteran players at the trade deadline and turned to Foerster to lead the way into the playoffs.

Whatever pressure there was, the young sniper made sure he did what he always does when lacing up the skates. That was have some fun.

"I think I just kind of let it roll," he said. "We were a young team, so I knew it was going to be fun. We were really tight. It was always in the back of my mind I had to play good and such, but I think I was trying to more just enjoy it and enjoy the moment."

Then there was the CHL Top Prospects Game in mid-January in Hamilton. The intense battle features the top NHL prospects from across Canadian junior hockey leagues and all vying to make their mark against their top peers in front of some 300 NHL scouts.

Foerster admits he felt a bit more pressure than usual. The result was the big forward scoring twice and adding an assist to lead Team White to a 5-3 win over Team Red en route to being named the Team White player of the game.

"I had a good first period and then going into that second period my line really clicked and I got on the board, so it was fun."

He wasn't the only nervous one.

"We were nervous, just hoping he had a solid game, didn't make any mistakes and that," said Glen, who pointed out that Tyson was often passed over for these big events in the past. "Then he went out and did that and it took a lot of weight off our shoulders. It was like, 'Yep, this is something he can do no problem.'"

Those important people in the stands also took notice.

"His coming-out party was kind of the Top Prospects Game," the NHL Eastern Conference scout said.

"If you look at the NHL playoffs now, it's a game where you have to move," added the scout. "I always look at these guys and see what type of player are they going to be? He kind of has the potential to be an elite goal scorer, which is a special breed amongst themselves. He has a chance to be a top-three, top-six forward at the next level."

Next Tuesday will be a special night at the Foerster house. Glen knows they've been fortunate to be able to watch Tyson play in his hometown and see him develop into one of the top hockey prospects in the world.

All those sibling battles in the basement may be long gone, but Glen still sees his son enjoying himself and having as much as fun as he ever has.

"I think that's just what he enjoys the most: hanging out with his buddies," he said.

Just like those days hanging out with Dawson playing hockey on the basement rink at home.