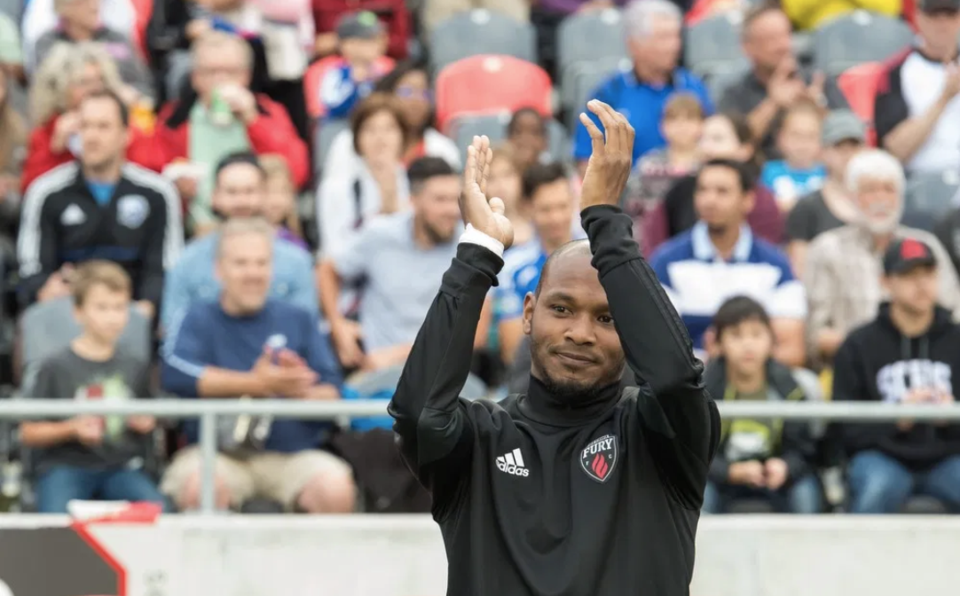 Julian de Guzman is the president and co-owner of 1812 FC Barrie. Image supplied

For Julian de Guzman, there was nothing like sporting the maple leaf on his chest and representing Canada on the soccer pitch.

"We have the quality to do it and we want to become a World Cup country," de Guzman told BarrieToday ahead of a press conference scheduled for next Tuesday officially announcing the Toronto native as the first president and co-owner of 1812 FC Barrie.

"It starts from the grassroots," added the 39-year-old, a former Canadian men's national team player of the year and the country's most capped player in international appearances. "It starts from working closely in a certain environment and markets that need that extra attention."

Which is one of the reasons why de Guzman enjoyed his time as head coach and general manager of the Ottawa Fury before the sale of the team to Miami FC in 2019. Having the opportunity to find new players and grow the organization is something he relished and what he now hopes to do in the local area with 1812 FC Barrie.

"Create and grow an appetite for soccer and discover the talent coming out of the region," he said.

That could mean developing young soccer stars here that may one day play for the national team and become a hero from the area.

"That's what I look forward to doing in the grand scheme of things," the Toronto native added. "I know what it means to represent (a country) nationally. The most beautiful thing I've experienced in my career is putting on that maple leaf and represent it around the world, as well as playing with the best in that country."

Barrie's newest professional team in the League1 Ontario is set to kick off in 2021 and de Guzman, who will oversee football and business operations for the organization, is excited to get going.

"There's tons of work that needs to be done, but I'm just very happy and pleased to finally get the message out there that my involvement is happening and has been confirmed," said the former midfielder who, over a 15-year professional career, had stops in Germany's Bundesliga (Hannover), La Liga in Spain (Deportivo La Coruna) and Major League Soccer (Toronto FC and FC Dallas).

He'll also be working with the Barrie Soccer Club in the area.

"Obviously, (these are) tough times as we're going through the pandemic and COVID and everything, but the dream never ends. As long as we're still around we're going to continue to be hopeful, keep dreaming and keep on believing, so that's something that keeps me going and I'm super excited about the opportunity."

It's a dream come true, he says, for any player post-career to remain involved in the game and especially help build a new organization from the ground up.

"We have the opportunity of a blank canvas and you want to introduce a philosophy and culture that you've experienced abroad and being able to bring a lot of that back home and pass it on to organizations in the country," de Guzman said. "That's a beauty in itself.

"For me, it's huge. Create your own philosophies, your own cultures as well as combine and collaborate with other cultures that currently exist. I've learned a lot about Barrie since I started having these conversations about 1812 FC and I sense the potential this organization has to move forward."

The former national star believes it's important that players who have the expertise from their careers as well as on the management side always find a way to repay the development and evolvement of the game in this country.

"Being involved in an area such as Barrie, for me the opportunity was something that was impossible to say no to," de Guzman said. "It's definitely an exciting time and I'm definitely happy and pleased to be in this position."

The game continues to grow in the country and seeing the success Toronto FC has enjoyed and the special relationship and loyalty they have developed with their fans is something de Guzman knows can happen here.

He's seen that hunger in other parts of the country where they are anxious to have a high-performance organization involved in soccer in their own backyard.

"From populations of 50,000 to a million, people want to see a team that's on their badge and represents their town and where they're from," de Guzman said. "Huronia is one of those areas that has enormous potential and support as well for that to happen."

For young players in the community, having the opportunity to watch professional players and have someone to look up to will have an impact on creating tomorrow's stars. That's something de Guzman wishes he had more of growing up as a kid in Toronto.

"I had to create those dreams and somehow motivate myself to get where I was," he said.

Today, the resources for young players are much different. He believes there's more talent thanks to the growth of soccer academies, soccer clubs and professional teams. Back then players were limited to getting a scholarship, playing for a semi-pro team or taking the risk and going to Europe.

"The game has evolved at the youth level, but we also need to discover it and not let that talent slip trough our hands," he said. "I'm sure there's plenty of talent out there in our own area."

That includes local players like Barrie Soccer Club graduate Carl Haworth, who played for de Guzman in Ottawa. Canada, he believes, is producing a lot of soccer talent today.

"We're slowly starting to see the change in the way the pyramid is structured to get to the national team or to get a contract with a professional team," de Guzman said. "The avenues are much more available than they were before, but in terms of talent there's tons of talent out there and we're fortunate to have guys like Jonathan David or Alphonso Davies who are super successful in their early careers."

For de Guzman, the game has been his passion from a child. It remains his passion as president and co-owner of 1812 FC Barrie.

"You want to be able to just come out your door and drive no more than 20 minutes to go watch your local team and then have your young ones look up to those guys as they become heroes in the community," he said. "That's one of the most beautiful things I wish I had growing up. This is an opportunity for me to encourage that and give back."